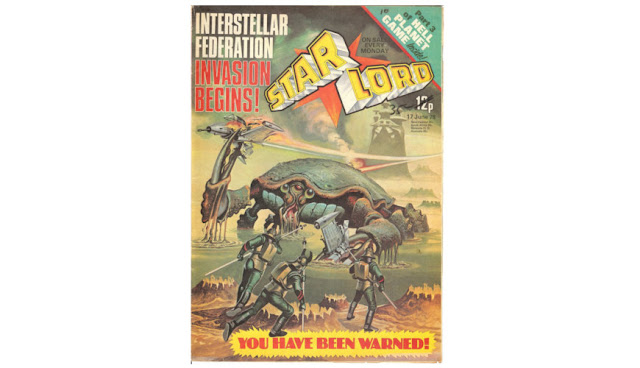 I’m currently rereading a comic book that I loved from my childhood, and which I can once again read, all these years later, thanks to the power of the Internet. The comic was called Starlord and it was a great moment from British comic book history that burned briefly but brightly. Almost the complete run of the Starlord can be found at Starlordcomic.com. Follow the link and read a few pages, it’s a great comic, with real class.

I remember I was too shy to ask the newsagent to reserve me a copy, so I had to try and catch it before anyone else could buy it. I learned what day it arrived, and made sure I went to the newsagents as early as I could in the morning to get my copy. I was successful almost every time, but I eventually worked up the courage to ask for it to be reserved, just to be on the safe side, round about the time it was being cancelled. If I failed in my mission to buy it before anyone else could, I would end up having to buy a copy of the Mighty World of Marvel comic book instead, which I loved, but not with the deep and burning passion I reserved for Starlord.

The Mighty World of Marvel (MWOM) was a comic that published reprints of 1960s stories featuring superheroes from the USA, such as Spider-Man, The Hulk, and the Fantastic Four. The monthly American comics were bundled together and each strip was split up over several weeks, to fit the British weekly format. At the time I was reading it, Hulk was the cover star, backed up by Nick Fury.


Anyway, this post isn’t about MWOM, it’s about Starlord, and I’m looking forward to reading the comic book again on the Internet almost as much as I used to look forward to running to the newspaper shop to get a copy back in 1978. In my journey of rediscovery, I have reached issue six.

The cover of issue six of Starlord is absolutely gorgeous. It is a painting of a giant crab taking on fighter jets and warriors with high-tech spears in some alien swamp, and It is easily good enough to have graced the cover of a proper sci-fi novel of the time, if not better. I half suspected it had, and ran a Google image search trying to find other places it might have appeared, but is seems to be exclusive to Starlord. Compared to the line art on the covers of other comics of the time, it is a real sign of Starlord’s ambition that it had a painted cover. 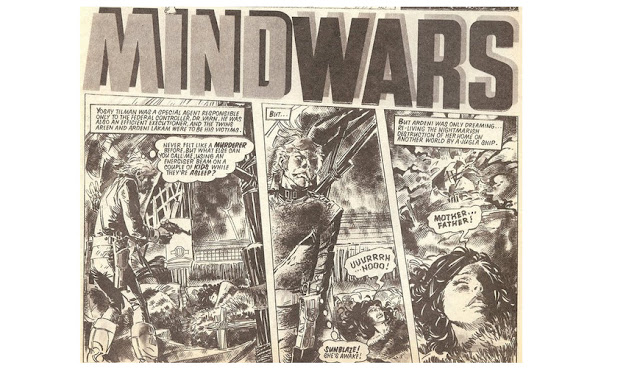 As usual the comic opens with Mind Wars. This is a lovely strip that is as close to Star Wars as you can get, except the mind powers are not called the Force and there are evil aliens threatening humanity, rather than an evil empire. In his episode the man who has been helping our heroes, Arlen and Ardeni, is revealed to the reader to be an assassin, and tasked with killing them. He doesn’t succeed, of course, and he is still their friend and protector at the end of the strip. 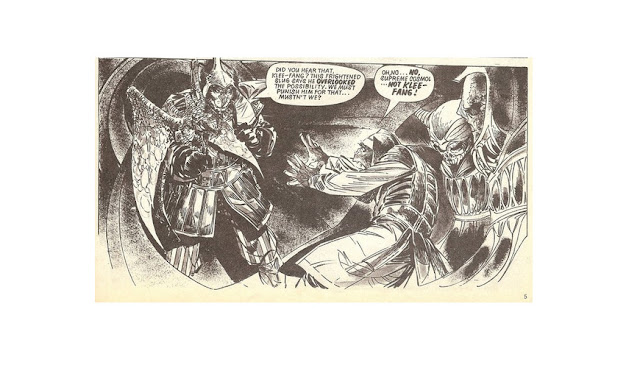 One of the best parts of Mind Wars was Klee-Fang, a miniature pterodactyl/bat thing that the bad guy used to terrorize his minions, and we see Klee-Fang being unleashed in a nice panel this issue. It really is a lovely slice of 70s sci-fi, with a scene where the heroes visit a space port that is very, and I repeat, very, reminiscent of the Mos Eisely space port in Star Wars. As usual, Mind Wars ends on a cliff hanger, and the next story starts on the following page.

This is the launchpad of two of the classic characters of British comic books, Ro-Jaws and Hammerstien, appearing in their first strip, a strip called Ro-Busters. All the robots of the strip are inventive, but they are each built for a particular role, and you could imagine them working in industry, alongside humans. The conceit of the strip is that a businessman has bought a bunch of clapped-out robots and he uses them on suicide disaster rescues that would be fatal for humans. The key to the daring rescue in this issue is a robot designed for cleaning the outside of skyscrapers who has suckers instead of hands and feet. 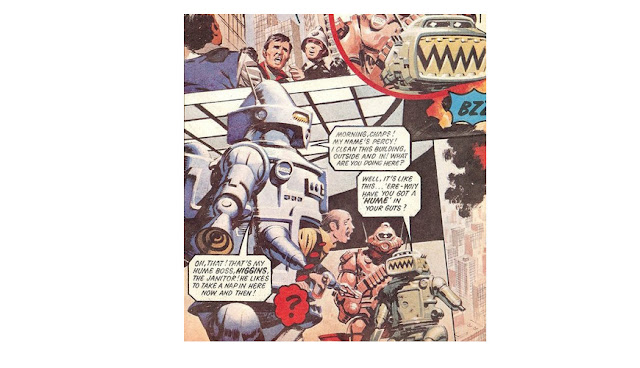 Apart from the robots, there is only one human character in the story, and he feints uselessly and has to be stuffed into the belly cavity of one of the daring robots for safe keeping. The story is a lot of fun, in the tradition of Thunderbirds, with a lot of nice little touches. For example, all the robots have tax discs, like a car, just one of the little details in the story that puts a smile on the face.

Next we have another classic, Strontium Dog, this week set on an asteroid where the heroes are hunting for a criminal, to be taken in dead or alive. It is very much a cowboy story in space, with a shootout in a bar and an old score to be settled. It turns into sci-fi at the end when the bad guy uses a hallucinogenic weapon to turn the two bounty hunters against each other, just in time to set up a cliffhanger ending.

Next up we have Planet of the Damned, which after some excellent episodes, has descended into a crazy story with plants that need to be educated and a bad guy dressed as a medieval knight riding an elephant. All-in-all, a bit of a dud, but hopefully it will regain its usual high standard next week.

Then comes the last strip, and always the least interesting, a story called TimeQuake, which is just some action set in an alternate future where the Nazis won WWII. This was dull at the time, and now in 2017, with real Nazis having influence in the White House, it is no fun at all.

Despite these two dodgy stories, once again this was a wonderful issue of Starlord, with a great cover and three strong strips, Mind Wars, Ro-Busters and Strontium Dog. I’ve seen the Strontium Dog story reprinted and on sale even today, and it still holds up pretty well, but for my money, the Mind Wars and Ro-Busters strips are even better. I can’t wait for issue seven, but thankfully I can read it when I have the time: I don’t have to set my alarm and run to the newsagents.
Labels: Prog Slog Starlord