The cover this week is beautifully painted, but some detail in the drawing seems to have been sacrificed because of that. The cover star is a massive future tank, so complaining about the lack of detail is just nitpicking, far from a deal breaker. This is another great cover, and I like it. 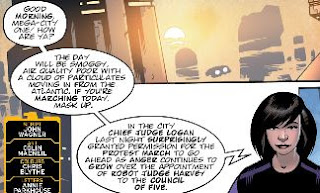 The first story up this week is Judge Dredd, as befits the star of the comic book. My heart fell a little as I saw the first page, with exposition coming at me in the form of newscasters and protester interviews. This is part six of this story, so why are we still being fed so much exposition? What everyone is yapping about is whether the peace officers who shoot them and crack their skulls with no thought to due process should be actual robots or not. It seems unlikely to me that such a downtrodden city would care about this. Also, I still don't like the B plot about Hershey being ill. She deserves more than that. But I am enjoying reading this story, and I want to see how the coup goes that we see being planned toward the end of the episode.

Next comes Skip Tracer, which has been my least favorite strip since jumping back into 2000 AD. It's cyberpunk, which is not my cup of tea, and the plot is a little convoluted. It ends with something concrete and promising this time, however. At the end of the episode, the hero realizes something bad is going to happen to a stadium full of people, and he seems to feel the need to stop it. Those are the sort of stakes I can relate to, so I'll be back next week to find out how it goes.

Grey Area is next, which is more cyberpunk, unfortunately, but with art that is usually intriguing. It's like speed painting, and very busy and detailed. But this week, the artist throws in a caricature of Stan Lee... as a tribute... maybe? It certainly doesn’t help the reader suspend disbelief, and that’s not the worst of it. There is an alien with dreadlocks – so, coded black – in an immigration zone, smoking weed, portrayed as being a criminal. There is also a weird detail, in the corner of more than one frame, where we see three backing singers. These are caricatures that are all very close to being racist, close enough to make me uncomfortable, anyway. I'm starting to get worried that the artist, Mark Harrison, isn't taking things like race seriously enough. Then comes a flippant reference to Schindler s List, of all things. Everyone is white in this episode, and they are having fun shooting aliens. The whole oblivious attitude to race and ethnicity started to really make me uneasy toward the end of the episode. Then one of the characters casually uses the word bitch to describe a woman, and my stomach turned. It's all very pretty to look at, but the story is deteriorating badly, and some unsavory elements are creeping into the art, too. This is one strip where I am very much not looking forward to see where it goes next week.

Next comes a Tharg's 3rillas. I guess this means it’s a story told over three episodes. That's an interesting concept. Three episodes should be enough to do something really interesting, that doesn't depend on a twist ending like a one-shot would. This one starts with a George Lazenby-looking guy telling a young Asian man to sit, like a dog. He sneaks into a Chinese restaurant, carrying a gun with a silencer, and I groaned out loud. So far this story has no sci-fi, no action, and is already a little bit racist (*edit, looking at the art again, a lot racist). The guy doesn't even look like George Lazenby, when I look closely, he's more of a Milk Tray guy. This racist stuff just isn't okay, or funny, or good. The editorial people need to get somebody with a clue on board, soon. (cough, diversity, cough)

Jaegir is the next story, and it is great. I didn't see the twist coming, where Jaegir gives herself up, and there is a nice mix of exposition and action. After the two disappointing – to say the least – cyberpunk stories, it's nice to see 2000 AD doing what it does well, some military sci-fi, and this one even had diversity and passed the Bechdel test. It is a real quality strip, and on a high after reading it, I officially pronounce myself still jumped back in with 2000 AD. I'll be back next week, for sure.