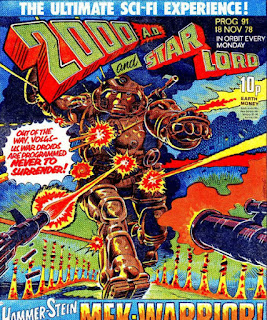 As a kid, I used to read a comic book called 2000 AD, and now I'm reading it all over again. I write a lot about 2000 AD, it was a very formative experience for me, and I still read it today. I have a 2000 AD page where I link to all the issues I have talked about on this site. I no longer have my own back issues, but I found some scans, so let's open the next cbr file of 2000 AD.

The issue we are looking at for this blog post is Prog 91, which was published way, way back in November 1978. The cover of this issue was drawn by Dave Gibbons, and it is a very good image of a war robot in a firefight, promising the prospective reader that action is to be found within the covers. 2000 AD often used to waste their covers on jokes and lesser characters but this one is a classic. The war robot is Hammerstein, a Mark III war droid created to fight in the Volgan Wars.

Hammerstein's right hand is a hammer and he is seen here with his combat head on. This was replaced with a 'civilian' head when he was decommissioned. Hammerstein is the first Mk III and is being field-tested with a human regiment. After gazing at this great cover for a good, long while, let's open the comic book up. 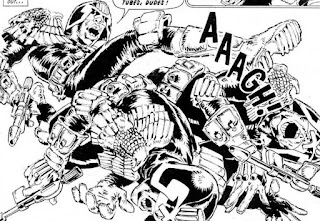 The first story, as usual in this period of 2000 AD, is Judge Dredd. It is the third installment in the epic The Day the Law Died story arc. This week the episode is drawn by my favorite comic book artist of the period, Mike McMahon, so I couldn't be happier. The man can draw action, easily able to condense a whole fist fight worth of melee down to just a single panel.


The story revolves around Chief Judge Cal, who is descending into insanity and passing a whole array of strict and often ridiculous laws on the population of Mega-City One. Cal declares that the law has grown too "soft" and his  crazy laws are intended to restore order to the streets. In the last issue, Cal appointed his pet goldfish as his Deputy Chief Judge. As I said last time, it is hard to read about Cal, with his crazy hair and pronouncements of doom, and not think about Trump.

Judge Dredd is still grievously wounded after being shot through the head by an SJS assassin, and in this issue Judge Giant is helping Dredd escape from Cal's clutches and reach a safe-house where other Judges opposed to Cal have gathered to start a resistance.

There are some nice little notes of nostalgia in the story, such as the fact that one of the judges is called Slocum. He is undoubtedly named after a popular TV character of the time, Mrs. Slocombe. She is a character from a BBC One comedy show, Are You Being Served? Mrs. Slocombe works in the Ladies Department of a large department store, and is known for her unusual hair colors, such as lime green, purple, and orange. Her husband is alluded to have been arrested by the Fraud Squad. She lives with her cat, Tiddles, which she refers to as "my pussy" and this is the source of many a weak joke. 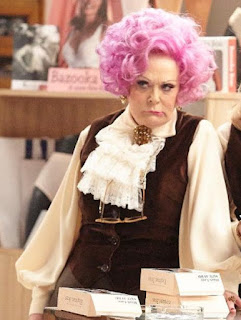 The three junior salesmen, Mr. Lucas, Mr. Humphries, and Mr. Spooner, constantly make sarcastic jokes about Mrs. Slocombe's sex life, age, appearance, size and weight. She has a fondness for gin and claims to be "only 46" but the staff determine that she was born in the 1920s. In every episode, and sometimes during the episode, Mrs Slocombe's hair color and style changes, and yet it is not noted or mentioned or noticed by any of her fellow workers. I remember watching her with my family, all gathered around the TV, laughing at the tired jokes and predictable shenanigans of this problematic 70s sitcom. 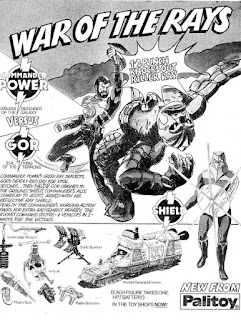 After the Judge Dredd strip, there is a little more nostalgia, with an advert for a kids' toy called Commander Power. I had completely forgotten about this toy, but seeing this ancient advert made it all come flooding back to me. With a pleasant flash of nostalgia, I suddenly remembered owning the vehicle, and an action figure but not Commander Power himself. I owned the space ranger, the guy in the blue space suit. 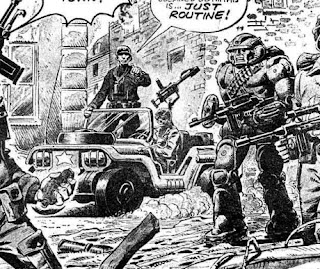 Ro-Busters this issue is again giving us Hammerstein's War Memoirs, drawn by Dave Gibbons, the same artist who did the cover. He is talented, but he is no Kevin O'Neil. This installment is titled Just Routine, and that is exactly what this story is. After the monolithic war machines O'Neil drew last week, this episode feels like a retreat into a smaller world. The visuals look like the second world war, with parachutes replaced by jet packs, and one single robot added into the mix. There's even a Jeep on the first page. It's strange to remember how near in history WW II was to the 1970s, it had ended just a couple of decades before and the influence can be seen very clearly in this story. 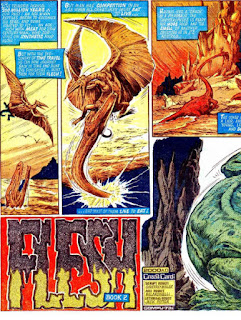 Flesh, drawn by Massimo Belardinelli and the next story up, is a little less than inspiring this week, too. I suppose it's because dinosaurs can't talk, and so the strip relies on a lot of text boxes to tell its story, and that inevitably slows everything down. It is still full of bloodthirsty fun though, like the fight between Claw Carver and a square-jawed hero called Peters.

After Flesh, the last story is Strontium Dog, and the artist, Ezquerra, is also no slouch in drawing action. The fight scenes in Strontium Dog tend to be drawn out into a long exchange of blows, so not much actually happens in this episode. It looks amazing though, especially the baroque warships invading innocent planets.

With a strong cover and a couple of classic story arcs underway, this is a great example of an issue of 2000 AD from its very early days in the late 1970s. In the tradition of "boys" comics of the time, it has to be categorized as rated M for manly, and should be read with this in mind. 2000 AD from this period is very heavily dependent on situations and action that is stereotypically masculine, and intended for a predominantly male audience. There is lots of fighting, stuff blowing up, and war. 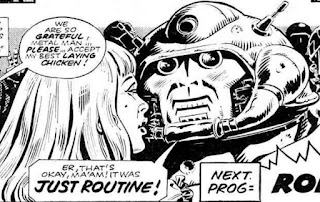 The role of women in the comic is stereotypically feminine, as support characters or love interests, while the men fight and die. Some stories in the comic glorify war, although there are many stories with the opposite viewpoint, allowing the comic to have its cake and eat it. So, with the caveat that the comic is Manly with a big M, it is a very enjoyable chunk of comic book history. There will be more 2000 AD from the very early days coming soon.