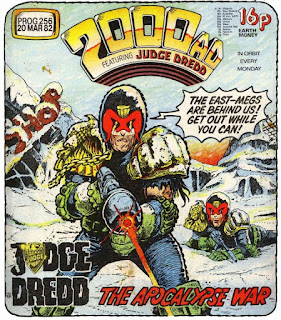 This issue has a great cover. It features Judge Dredd, the star of the comic book, standing in the snow and firing a laser at the reader. Even if I didn't know anything about it, and was just seeing it today, I would be very interested. But this isn't a modern comic, it comes from a long time ago, when a show called O.T.T. (Over The Top) was on TV. I stayed up late to see the adult entertainment it promised, and was hugely disappointed. In my defense, I also watched Q.E.D. (quod erat demonstrandum) the BBC popular science documentary series of the time. Anyway, back to the comic book. That cover is drawn by Carlos Ezquerra, and it has a gritty, sketchy quality that I love. Dredd looks like a grizzled and weather-beaten guy with a normal, non roided-out physique. His uniform is priceless, with its eagle and stars-and-stripes shoulder pads. It wouldn't be out of place on Pose, but flamboyant uniforms have been worn by militarizes police through history. His look is extreme, but somehow still realistic. 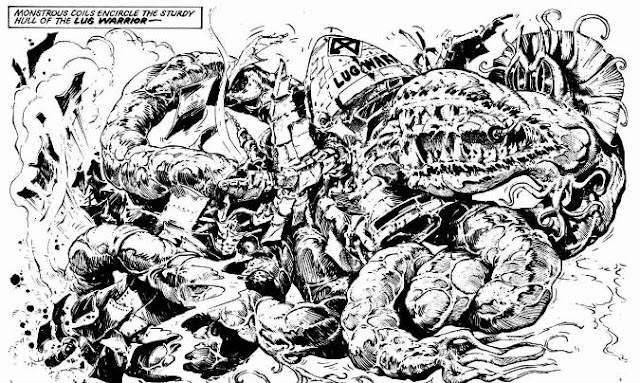 Ace Trucking is the first story this week, and it is all just shenanigans with a race between spaceship crews getting derailed by a giant monster. It's enjoyable and well drawn by Belardinelli, but not super interesting.

Next comes Nemesis the Warlock, with a long action scene. Compared to most stories of the time, it feels very modern and decompressed. It also has a female character, going toe-to-toe with an adversary in a swashbuckling subplot. She is bested, before you get too excited, and will no-doubt have to be saved next issue. 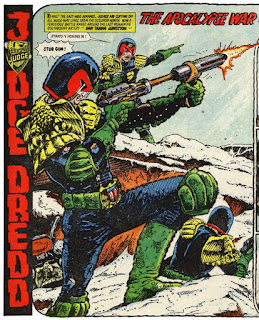 Then we get the Judge Dredd story from the cover, and it starts with another lovingly drawn scene, featuring Dredd in action. I remember, as a kid, that I was very influenced by this image, and drew a lot of heroic, futuristic gunmen with one leg out in front of them, in just this action pose. My efforts never approached anything like the quality of the image Ezquerra conjures here. It's a thing of beauty. The story, however, is just a continuation of the long, dull, arc about the invasion of Dredd's home city by Soviets. It was a preoccupation of the time, but thanks to Trump pulling out of the nuke treaty with Russia, it is strangely contemporary, too.


Next comes a Future Shock, which is a lackluster short story with a twist ending about interplanetary trade that I don't quite get. These weak Future Shock stories are a staple of 2000 AD, and seem to have been used to foster new talent, so I shouldn't begrudge them, but they are rarely much fun to read.

Then we get a Rogue Trooper story that is pretty good. Sometimes Rogue Trooper is just a way to recycle war stories, popular at a time that still remembered WWII, though the memory was fading. This story actually has sci-fi elements at the forefront, with Rogue, who is one version of a super-advanced genetically engineered clone, pitted against enemy clones who are more bestial in design. The plot makes no sense, unfortunately. Rogue challenges the leader of this squad to single combat, beats him, and his squad then lets Rogue go. It's just weird, but the premise is interesting and the setting, a petrified and poisoned forest, is atmospheric. 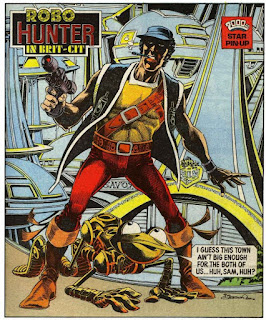 The comic book is rounded out with a poster on the back and, after a run of great posters drawn by O'Neil that feature grim vistas of the Nemesis the Warlock universe, this picture of Sam Slade, Robo Hunter, is pretty bland. It's well drawn, if a little featureless, but I can't imagine anyone actually attaching it to their wall with Blu Tack. All O'Neil's works got snipped off and went up on my wall, I remember, but this stayed on the back of the comic book.

This isn't a great example of 2000 AD, with nothing in it drawn by either O'Neil or McMahon, but it isn't terrible either. It's worth enjoying on its own terms, but only if you are already up to date with reading through your pull list of modern  comics. Let's hope next issue is better.
Labels: 2000 AD British Comic Book Prog Slog