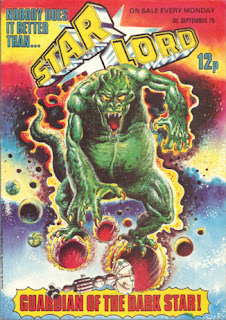 I am currently indulging in a bout of nostalgia with an old comic book from my childhood, a comic called Starlord. This post is about issue number 21, which came out 30 September 1978, and it’s great. You can read this vintage comic book too, because scans of the entire run of the comic are available at Starlordcomic.com.

Issue 21 has a great cover, but it is another random one. It doesn’t relate to any of the stories inside the comic. It’s colorful and old-school, which makes for an attractive cover, and it certainly says science fiction, what with the giant monster and a spaceship in the foreground. It is also beautifully drawn, but a giant monster this size strains the credulity. 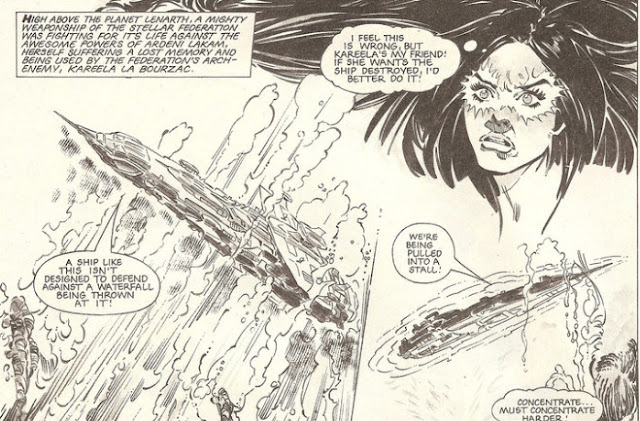 As always, the first story presented is Mind Wars, and this week we catch up with Ardeni, after she has been drugged to rob her of her memory. She has to rediscover her mind powers, but under the influence of the evil Kareela. The first panels show her tossing about battleships as if they were toys. 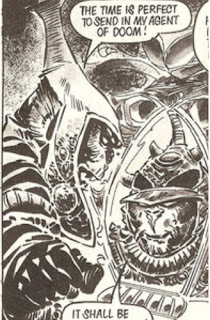 Mind Wars is pulpy and fun, and inspired by Star Wars, which was in turn inspired by Saturday morning shows like Flash Gordon. This panel in particular wouldn’t be out if place on the silver screen, in Flash Gordon, a serial created by Universal Pictures in 1936. 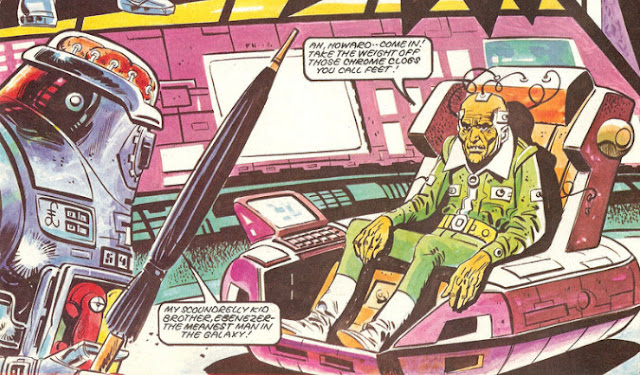 The next story is Ro-Busters, which was always my favorite. Howard Quartz, the character who runs the Ro-Busters squad of disaster droids, has been kidnapped, and we have had to wait since last week to find out who it was who did the abducting. It turns out Quartz has a kid brother, and he’s the one behind all Howard’s trouble. 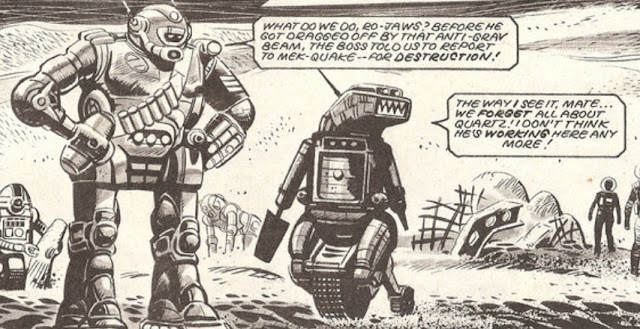 The confrontation between the two brothers is fun, but you can’t have an episode of Ro-Busters without the stars, Ro-Jaws and Hammerstein. With the disaster squad under new management, they have their own problems. 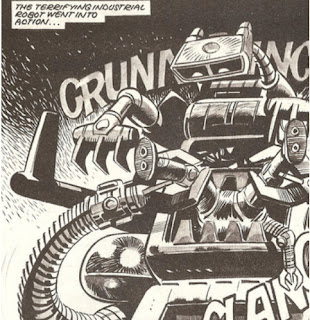 The team is now being ruled with an iron hand, and we see one of their robot friends being chewed up by an enforcer droid called Mek-Quake, just for chatting while working. The new team running Ro-Busters in the place of Howard Quartz are very obviously bad guys, and will no doubt very soon get their comeuppance. 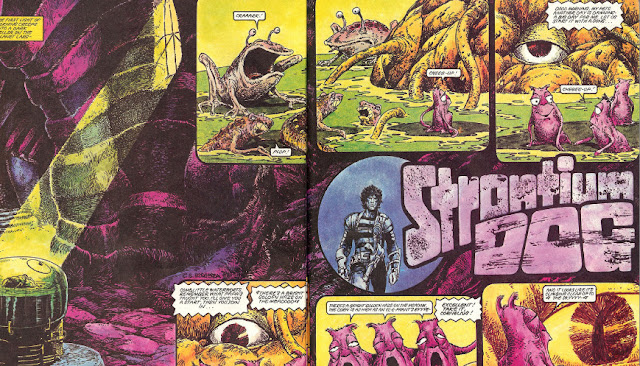 Next up is Strontium Dog, and this spread is beautiful, for the colors of the pages alone. This episode of Strontium Dog is a true classic, that I have reread a few times. It has ended up imprinted in my mind in a way that the other stories in this issue aren’t. It’s about a criminal mastermind that is a living brain from a swamp planet. It lives in a tiny terrarium that simulates the conditions on its home planet, and it trains unintelligent creatures from the swamps of this world to sing. They aren’t intelligent, but they are good mimics, like a mockingbird. It’s very lonely creature, surrounded by the idiot members of its gang, and it is easy, in hindsight, to see why such a character appealed to a young nerd boy. 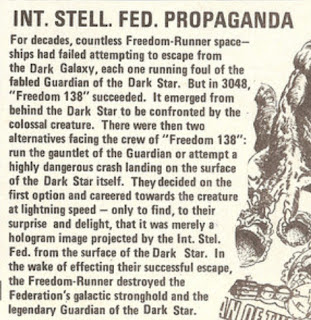 The cover illustration gets a paragraph hidden away at the bottom of an editorial page to justify itself. It turns out the monster was just a hologram. 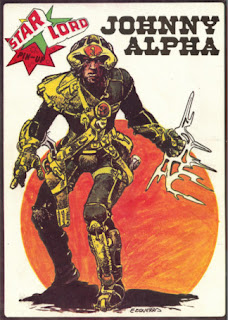 And then the comic is over, or almost over. On the back we have a strange drawing of Johnny Aloha done by Ezquerra, but it looks slightly off. The proportions don’t work. He has hips twice as wide as his shoulders, but somehow it's still a powerful image. It almost looks like a sketch, like concept art, done when the design of Johnny Alpha was still evolving. It’s a very nice piece of work, and I’m glad it was published as a poster. I remember spending hours trying to copy it as a kid, with varying results.
Labels: British Comic Book Prog Slog Starlord