I write a lot about 2000 AD, reading it was a very formative experience for me back in the 1970s and 1980s. Issue 39 of 2000 AD came out 19 November, 1977 not long after Paul McCartney’s “Mull of Kintyre”, had been released, which gives me an idea. I often suggest music to listen to while reading ancient issues of 200 AD, to get a feeling for the time each issue was released, and I can think of no better time capsule than Mull of fricking Kintyre. 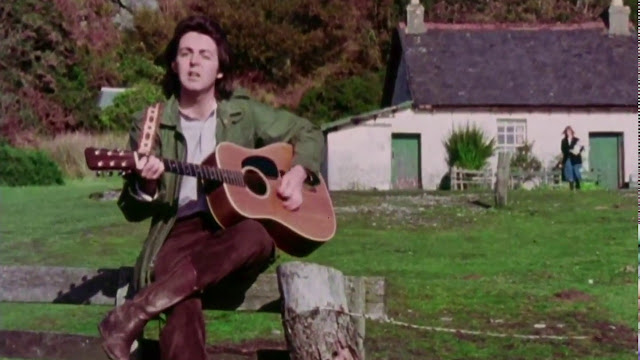 It was the first UK single to sell more than two million copies and for a number of years was the biggest-selling UK single of all time. In fact it still is the UK’s best-selling completely non-charity single, at 2.09 million copies sold. Despite all this UK adulation it was not a pop hit at all in the US, though it did manage to reach #45 on the Easy Listening chart.

Here’s the chorus, in case you don’t know what I’m talking about.

The song became a Christmas number one, and probably gets its Xmas vibe from the fact that McCartney roped in the local Campbeltown Pipe Band to play on it. The pipes were recorded outside in the open air, which gives them a special sound that couldn't have been found in a studio. Okay, with Mull of Kintyre playing in the background, let’s take a look at this ancient issue of 2000 AD. The first thing we see is the cover, which is by Brett Ewins and Brendan McCarthy. It is well drawn but a little generic. It is also obviously intended to be a joke, just not a particularly funny one. There is an accompanying story of a few hundred words inside the comic book on the editorial page, and whoever was behind it wrote a psychological horror story about a comic book artist having a breakdown because of deadline pressure. The story doesn’t really go with the cover art, but it actually isn’t bad. This generic rubbish is another wasted opportunity for 2000 AD, and the sooner they start featuring their stars, like Judge Dredd on the cover, the better. 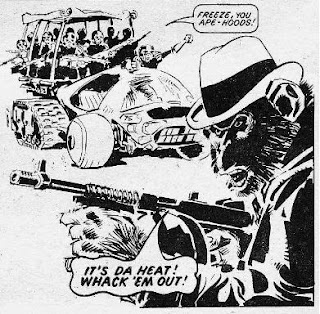 It is obvious that the editors now know Dredd is the star because he has been promoted to pride of place as first strip. It’s a self-contained little story where Judge Dredd encounters the Ape Gang for the first time, in a story scripted by John Wagner, with art by Mike McMahon. Because it’s drawn by McMahon it looks great, but it is just too anachronistic for me to enjoy.


The criminals in the story are dressed in pin stripe suits and use tommy guns of the type that became infamous during the Prohibition era as a signature weapon of the various organized crime syndicates in the United States. They are cybernetic apes, sure, but that is the only twist. Dredd solves the gang conflict between the apes and a human gang by simply gunning them all down. Like I said, it looks great but it is not a classic.

Next up comes Invasion, which from the first issue of 2000 AD, has been a strip that has usually told self-contained stories that are done in one or two episodes. This issue, however, it is becoming clear that Invasion is attempting to tell a much more long-running saga. It is called The Prince, and will eventually run to 8 episodes. This is the third installment of the story, written by Gerry Finley-Day, with art by Carlos Pino. Again, it looks great but the story is pure filler and is all over the place. The only thing that rings true is the devotion of the British people to the parasitic royal family that rules over them. Hopefully The Prince will get a little more interesting than this installment before the end.

Dan Dare is next, and it continues telling its extended Star Slayer story arc with script by Gerry Finley-Day accompanied by art from Dave Gibbons. Usually Gibbons produces some excellent sci-fi art, but here he is only asked to draw rags and rocks, which makes for a pretty dull looking episode. As usual it is all action, which is nice, but it doesn’t make a lot of sense if you stop to think about it for even a second. 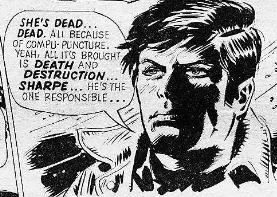 The last episode of M.A.C.H. Woman comes next. This is the story arc that has been running in M.A.C.H.1. for a couple of episodes, and which I have been enjoying. The script is by Alan Hebden, with art by Lozano. The reason I have been enjoying it is that, unusually for a British sci-fi comic book of this vintage, it features a female protagonist who is as powerful as the story’s male hero. Unfortunately she gets unceremoniously fridged at the end of this episode, making me groan in annoyance. Why can’t this old comic book be better than this? The artists and writers were living in a very sexist and racist society but they were supposed to be looking beyond that. They were supposed to be looking to the future. I guess they just weren’t looking very hard. I love this problematic old comic book to bits, and I’m going to keep reading its ancient back issues, but sometimes I read it with gritted teeth. 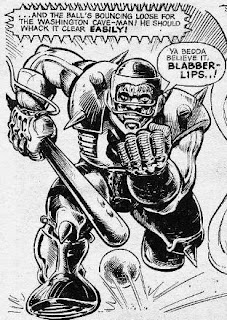 Harlem Heroes, written by Tom Tully with Massimo Belardinelli doing the drawing, comes next and it is such a waste of space that I can’t bring myself to pass comment on it. Belardinelli will go on to create great art in later issues of 2000 AD, but this isn’t it. To end, just a reminder that the best way to support this blog is to buy one of my books. Simply go over to Amazon, or Kobo and get one.