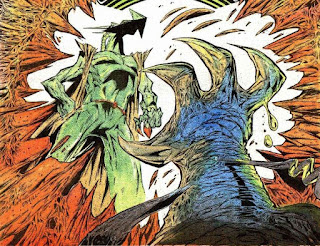 For some stupid reason I've taken it into my head to read every issue ever published of a comic book called 2000 AD, and blogging about the experience. Links to all the blog posts about this quest are collected here on my 2000 AD page. It's a ridiculous thing to attempt, more akin to performance art than reading a comic book fun for fun, but I'm not the sort to quit something once I've started it. (Actually I am, so do not expect this project ever to be completed, but it is still ongoing for now). This post I'm looking at issue 337, and first impressions are good. Without even opening it, I can see it has a cover by Kevin O'Neil, an artist who is absolutely unmistakable. There isn't actually much going on in the cover, just a hand, some eggshell, and a small view of Nemesis the Warlock. But to draw thus very simple scene, O'Neil has used about a million precisely scratched ink pen lines. It is an amazing image to look at, all that detail, the folds of leathery egg, the scales on alien skin, even though it is only texture, vibrates against the eye.

But, as is often the case with O'Neil, the image is curiously static. It is only the title below the image that tells us this is a creature hatching. It would be hard to work that out from the image itself. Where another artist would have created something dynamic, with an alien exploding from its egg, O'Neil has created an abstract series of textures, more interested in the minutiae of this image than the big picture.

The way O'Neil gets distracted by detail is a huge flaw in his abilities as an artist but, paradoxically, also one of his great strengths. It's not O'Neil's best work, but still a standout cover. That's how you recognize a true great. Even their lesser work is better than anything anyone else is doing. 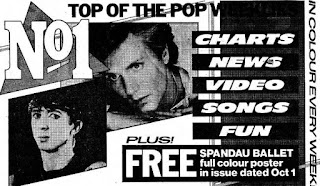 I never much bother with the editorial page, either in 2000 AD or any other comic book, so I'm not upset at all to see it reduced this issue to only half a page. The other half is used to advertise a new music magazine, and the advert is priceless. It really gives you a taste for the time this comic was published - the early 80s. Just look at those haircuts. And the new magazine, apparently, comes with a poster of Spandau Ballet. Ye Gods.

The Judge Dredd is drawn by Ron Smith, a classic Dredd artist. He draws a huge fire in just one small panel with just a few effortless strokes, which is so different to the hours of obsessive scratching O'Neil would need for the same result.


The story this week carries on following Dredd through a night at work, and I thoroughly enjoyed it. We see lots of dystopian future stuff, including a weird sport called bite fighting. It's awful - something a little like prize fighting and dog fighting combined - and I can imagine it being popular.

We leave Dredd this issue as he and Hershey do a routine crime swoop. It's fascist future policing in Dredd's usual style. These sort of ideas about the extreme activity by the forces of law and order that might come in the future is exactly what a sci-fi comic like 2000 AD should be doing.

The cast of characters this episode is pleasingly diverse, and unusually for 2000 AD of this vintage the story features a female character mixing it up. But there are still hints of the more prevalent sexism of the times. A housewife in pinafore serving tea is the victim of the crime swoop - it's hard to imagine a more sexist image, or one more redolent of the UK of the 1970s - and the criminals do not take Judge Hershey seriously (until she bashes their teeth out).

Then Slaine starts a new story called The Bride of Crom, and I can't help but find it disappointing that it isn't drawn by McMahon. The artist is Belardinelli, who is good and who has obviously worked hard on these images, but the art is static and pretty, compared with the vibrant, atmospheric art McMahon produces. The purple prose of the introduction sets more of a mood than the art does, and that is the wrong way round for a comic book.

The difference in the art between the two is most noticeable in a mid section that retells the story so far. The comparison only shows how there is a wide margin between the two styles, and I much prefer McMahon's work. However, I must admit that Belardinelli's work is very effective when things go underground. It's stylized, but still has some atmosphere. He is a good artist, and what he is good at, he does well. He has fun drawing rotting flesh, for example, and skeletons. It becomes almost a horror comic as the episode progresses.

Nemesis the Warlock comes next, and this issue may not have McMahon, but it does have an artistic titan almost as mighty in Kevin O'Neil. He does the cover, and this internal strip, so we are doubly blessed. This issue we get some insight into the reproductive behavior of Warlocks, all very tastefully done. Apparently a male Warlock gallops around on the back of the centaur-like female, and when they get home there is an egg waiting for them. Similar to what happens with humans in a lot of ways. 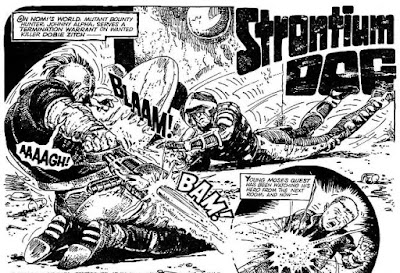 In Strontium Dog in the last issue we saw Johnny Aloha go about capturing a criminal in the usual way, but this week we see that this tine there is a difference. This tine there is collateral damage, a little kid gets shot. 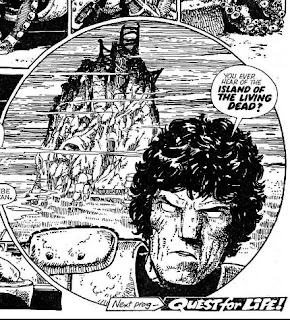 I really enjoyed this episode. The mother blames Johnny for the death, and the local community start to get angry. Johnny's partner, Wulf, just wants to get off planet, but Johnny broods. At last he comes up with a plan. He thinks he can bring the boy back to life, with the aid of the Island of the Living Dead. I can't wait to see here that is going.

Finally, just a reminder that the best way to support this blog is to buy one of my books. Just go to Amazon, or Kobo and see if there is one that interests you.
Labels: 2000 AD British Comic Book Prog Slog