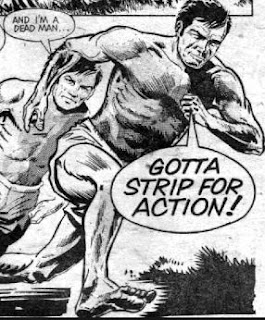 This is an issue of 2000 AD that I had never seen before downloading it the other day. I didn’t start reading the comic book regularly until roughly one year after the publication of this beautiful example. I write a lot about 2000 AD, because reading it was a very formative experience for me, and I still read it today. I have a 2000 AD page where I link to all the issues I have talked about on this site. 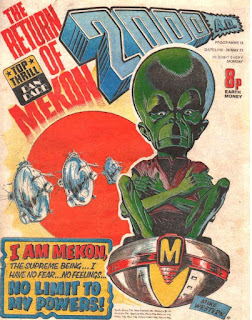 The cover immediately strikes me as a wonderful work of comic book illustration. It has the Mekon, a classic comic-book evildoer, on the cover and the design is very raw and 1970s. As ever, I really love the original title graphic, the hand-drawn perspective of the "2000" and the "A.D." in its own little impact star. It all looks just great. 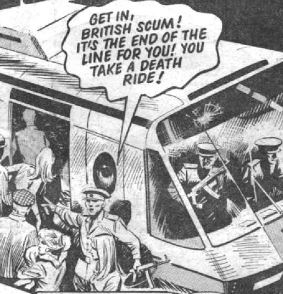 The first story is Invasion, an alternate-history story about a future Britain that has been invaded by the "Volgans" and the macho resistance fighters who are taking them on. Usually the invaders are presented as dirty commies, but in this episode they are more like as ersatz Nazis, concerned with getting the trains to run on time and operating a liquidation camp.

The next story is Flesh, which is a real favorite of mine. Where Invasion attempts to stay somewhat grounded in what might happen in an imagined future, Flesh is just bonkers fantasy pushed to the extreme in order to bring dinosaurs and cowboys into the same story, along with lasers, robots, dragsters and jet fighters. It is just great. It is also a surprisingly progressive vision of the dinosaurs themselves. Here we see a tyrannosaurus covered in a down of protofeathers.

I doubt the writer was thinking too much about science when he decided there should be wooly t-rex in the north, but what we know now about dinosaur feathers now lends some support for this wacky idea. The furry t-rex also looks great, as it charges the laser fence of the besieged time base, surrounded by starving predators. They are searching for the herbivores the cowboys have wiped out to serve as dino-steaks on the tables of the far future. Great, just great. 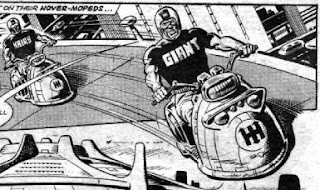 The Harlem Heroes sport is drawn at an extreme level of detail by the wonderful Gibson and there is a lot to enjoy. However, despite its quality, his work can be static and prosaic to the point of looking absurd, such as when the Harlem Heroes are traveling to the Museum of Sport on futuristic bikes that look like mobility scooters. After last episode's cyborg assassin, this episode's visit to a museum is a little dull. Still a beautiful thing to look at, though, and the future sport of tank racing that we glimpse in an exhibit is something I think could catch on if it was given a try. Dan Dare comes next and it is just stupid. Entertaining for sure, but stupid. Dare meets a space dog/man and the greeting of his people is a scratch behind the ear. That’s just extremely pulpy and hard even for a kid to take seriously. We also meet the Mekon, who has been exiled from Earth, along with his flying chair and its weaponry - but that floating chair, along with his giant brain, is all he needs to take on the entire galaxy. Stupid, but fun.

Next comes M.A.C.H.1 which is often both intentionally and unintentionally hilarious. Every week it serves up a bunch of macho BS with an obsession with hardware. This week it doesn't disappoint, featuring a chieftain tank and an experimental tank with a primitive battlefield laser. The experimental tank, of course, gets taken over by enemy agents and so M.A.C.H 1 strips off his Six-Million-Dollar-Man-style tracksuit, down to his boxers, for no reason that is explained, and hunts it through the forest. Hilarious. Macho BS taken to the level of an art form. 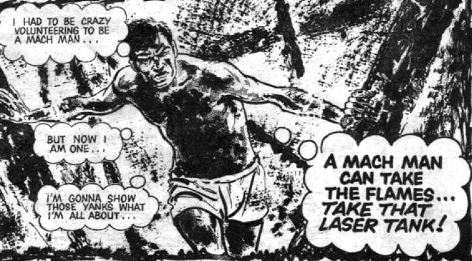 The story also displays the pathological inferiority complex that writers of British 70s machismo felt in the face of the undoubtedly superior USA. Here our British hero - as we said, dressed only in boxers for no good reason - keeps muttering how he's going to show those Yanks how tough a British soldier is. The whole thing is priceless. 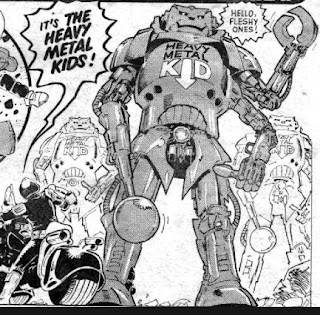 Next we get some classic Judge Dredd, drawn by McMahon by the looks of it. He is still learning his craft, here, which makes it a wonderful insight into the development of his early style, which is so different to the way he draws now. I also didn't realize that Heavy Metal Kid, one of the robots in the robot revolt the judges are dealing with is actually the size of a mecha. I had seen drawings of him before, but never in context where you can see the scale. 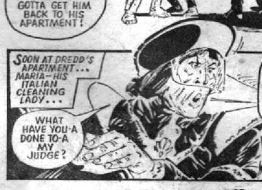 This story also has the only female character in the entire darn comic book. She's a housekeeper and an offensive Italian stereotype as well, which reminds me that it is important to mention that it is difficult to wholeheartedly recommend reading 2000 AD because of this kind of misogyny and xenophobia. It's no excuse, but the comic book was laser focused at a readership of adolescent white boys. I enjoy comic books like this enormously but they are a guilty pleasure. I'm glad modern comic books have made faltering steps to showing more diversity than we see here. Nobody is writing stories like this anymore, which is both a good and a bad thing. It’s good that comic books are now – at least the best of them – aimed at an audience bigger than young white men, but I wish the comic books of today also had the joyous speed and invention of storytelling that is on display in these old issues.