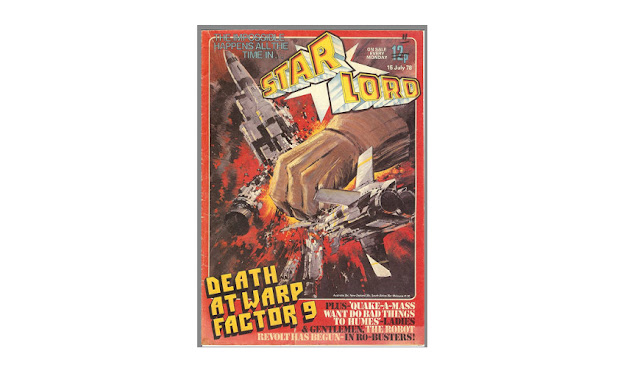 This is the tenth post I’ve written about going back and reading an old comic book from my youth. I’m reading them again, after an interval of decades, because the entire run of the comic has turned up as scans on a website, allowing me to relive them, even though my original copies were sold to a charity shop long ago.

The cover to issue 10, which came out 15 July 1978, is another that has an image that does not relate to any of the strips within the comic. It’s a nicely painted picture of a spaceship being destroyed by a giant disembodied hand, but even though in theory it should be dynamic, somehow it’s a little bland. It’s more like the generic art you might find on the cover of a sci-fi novel that the artist hasn’t actually read, rather than something that goes on the cover of a comic book.

The first story in this issue, as always, is Mind Wars. This is a story that is very heavily influenced by Star Wars, which was a cultural juggernaut in the UK in mid 1978. Star Wars may have been released in North America in May 1977, but UK audiences had to wait months for it to cross the Atlantic. Also, films always opened first in London and rolled out across the country afterwards, so the film remained in the capital for over four weeks until February 1978, when it started to travel round the country. So this comic came out when Star Wars was at its height in the UK. 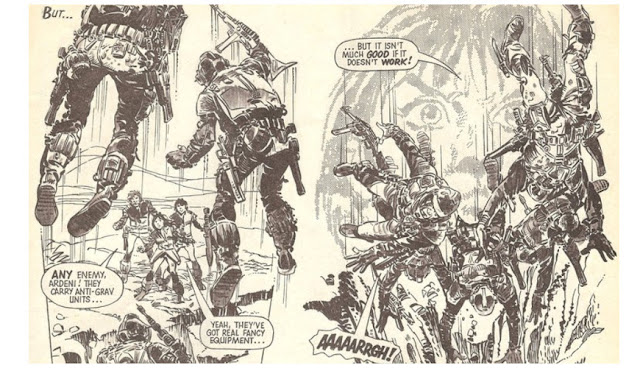 This episode of Mind Wars has an appearance – as far as I know the only appearance – by a bunch of bad guys I remember from first reading the strip, the Jackal Troopers. They are described as part of imperial ground forces tasked with carrying out punishment missions anywhere in the galaxy. It is said they never fail. Of course they are no match for the two teenagers with force-like mind powers at the heart of this story. 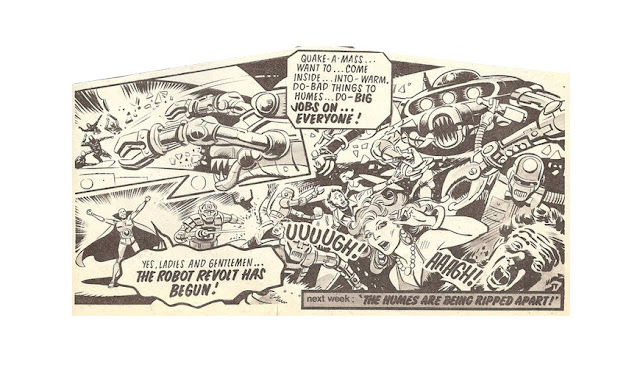 Ro-Busters is next and the last two issues have been leading up to a robot rebellion in a luxury space hotel. At last the carnage begins, with a huge spider-like maintenance droid, the size of a truck, breaking through a huge window and running amok in the dining room. I’m sure there will be plenty more mayhem in the weeks to come, and it is certainly an interesting, if bloodthirsty, inclusion in a children’s comic. But, hey, that was the 70s. 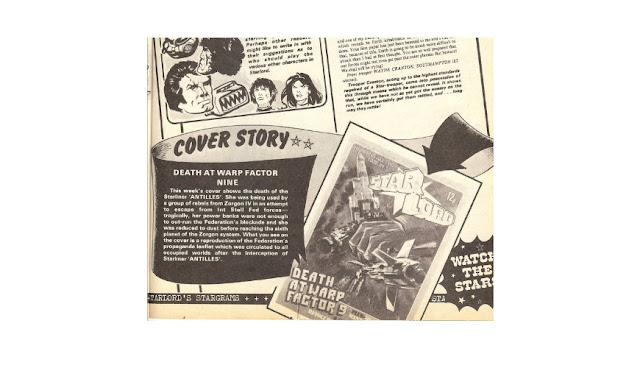 The story behind the cover illustration is told in a tiny paragraph on one of the comic’s editorial pages. It’s a bit of an afterthought, but the story is surprisingly quite satisfying. The painting, apparently, is a propaganda poster designed to show the power of Int Stel Fed, an evil alien empire. 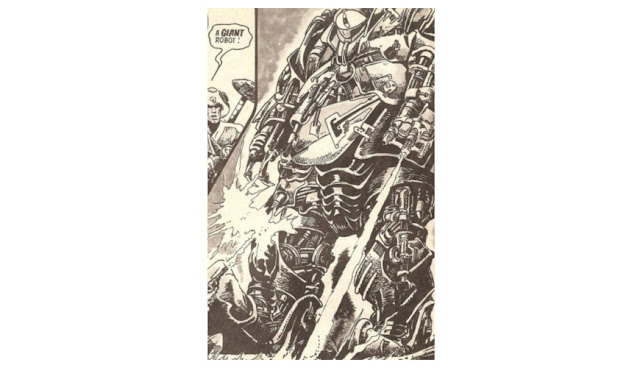 Strontium Dog this week is about revenge. Our hero, Johnny Alpha, is so enraged at being tricked into helping an AI commit genocide that he takes on a robot army, with only his sidekick, Wulf, to help him. The robots’ inability to shoot him is explained as being because it has been so long since they had their weapons checked. The whole story makes more sense emotionally than it does on any logical level, but the strip is entertaining because of the beautiful robot designs created by Ezquerra, which are mechanical but monstrous and organic. They look like the Lord of the Rings meets the Tin Man. There is a giant robot named Big Boy that is a delight, a Cyclopean mechanoid with pointed toes that acts as the boss fight after all the other robot mooks have been dealt with.

By the end of the strip, Johnny’s berserk fury has turned to cold calculation. He takes a terrible revenge on the evil AI by leaving it alone on the planet it worked so hard to take over.
As the AI says: Being in charge is no fun if there is nobody to boss around. 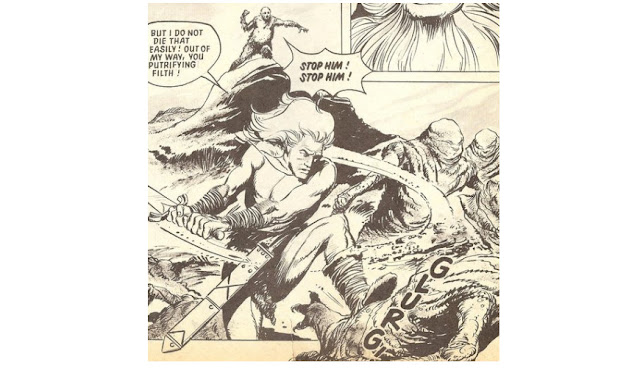 The next strip, Planet of the Damned, also features a story of a single hero taking on an army of monsters. It’s all very pulpy and fun, and the lone hero is even dressed as a loin-cloth-clad barbarian. Planet of the Damned was never the best story in Starlord, but it was never the worst either. I enjoy how specific it is to the 1970s with its references to the Bermuda Triangle and cultists dresses like extras from a Hammer Horror movie.

Half way through this installment, Planet of the Damned moves from the barbarian fighting “abhumans” to some complicated shenanigans that revolve around the group of characters rescuing themselves from the strange planet they have landed in, and going through a wormhole to re-emerge on Earth through the Bermuda Triangle. It takes a lot of large text boxes and speech balloons to get all the information across, and then, pow, it works. The entire story wraps up with everyone getting safely back to Earth, specifically Miami. As I'm reading, I suddenly realize that Planet of the Damned will never return, something I didn’t know the first time I read it, and I will be sad to see it go.

It is only as the strip finishes that it strikes me that the strip wasn’t about any of the characters in it, it was about the Planet of the Damned itself, as a metaphor for late 1970s Britain. Judging by the extreme speed of the climax, I suspect the strip was killed, and I can only hope what comes to replace it will be as good. We shall see with the next issue of – TV announcer voice – Starlord.
Labels: Prog Slog Starlord