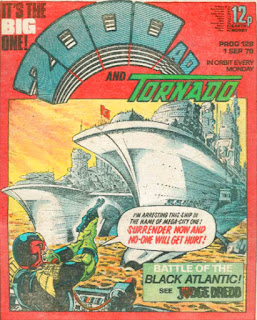 I write a lot about 2000 AD, it was a very formative experience for me, and I still read it today. I have a 2000 AD page where I link to all the issues I have talked about on this site. Part of the enjoyment of reading old comic books is the nostalgia, being transported back to the time and place where you bought the comic, to feel the emotions again as you read it. Even when the comic book wasn’t so great, it’s still fun to think back to reading it for the first time, all those years ago. This issue of 2000 AD, for example, brings plenty of feels with it. After the huge disappointment of the previous issue, which I think is possibly one of the most disappointing issues of 2000 AD ever printed, I remember holding this comic book in my hands and trying to decide whether to buy it or not. I was very angry with 2000 AD for the way they had disrespected Starlord, the comic book that had brought me to them, and I very much wanted to punish them by never buying a copy ever, ever again. But doing so would have been a momentous decision. I remember struggling for what seemed like hours with this decision, standing by the comic racks in the local newsagents. 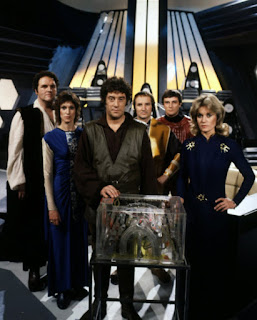 2000 AD was one of the pillars of my life back then, along with Blake’s 7, Doctor Who, and Wagon Wheels, so to be even considering not buying it was a huge step for me. I wanted to hate the comic book. I wanted to shun it, but I couldn’t. In the end, I did decide to get it, and that has a lot to do with this issue’s audacious cover. It features the comic book’s most popular character doing something so crazy and brave that it is almost absurd, like something from a Monty Python sketch. This issue, Judge Dredd is arresting an entire ship. 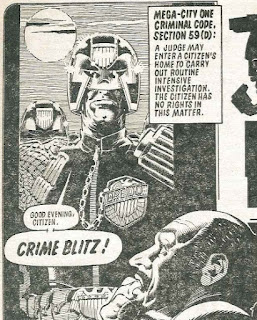 The ship looks cool too, drawn by regular artist Ron Smith, who here surpasses himself. The story that goes with this cover starts with an interesting idea about future police doing an audit on every area of a citizen’s life called a crime blitz. Often I think that Ron Smith’s art, with his fleshy and pudgy figures, is not quite right for the skinny, edgy future first imagined by Mike McMahon, but here his drawing style works beautifully. The way the story escalates from a routine invasion of a citizen’s privacy by the future police force to an international confrontation with one of the other walled megacities that has survived the nuclear wars is also some great storytelling. It is pure comic book, and a lot of fun, while being thought provoking at the same time. 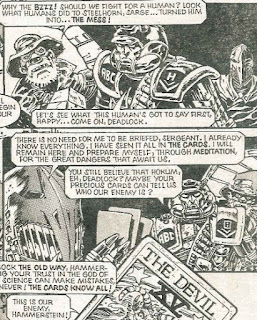 The next story is Blackhawk, which this issue is just a fight between a Roman centurion and a bear creature. It's dull. Then comes an ABC Warriors story drawn by Brendan McCarthy from before he discovered his style. It'S not great, but even a bad ABC Warriors story is still a good comic book.

The next story, The Mind of Wolfie Smith is interesting but a little too YA for my tastes. The comic book is then rounded out by Disaster 1999! and Captain Klep, which are both a waste of paper. So the only thing that kept me buying and reading 2000 AD at this point was one absolutely classic Judge Dredd story, and a glimpse of one of my favorite characters, Hammerstein, in the substandard ABC Warriors story in this issue.

It is fun to remember how upset I was with this comic book, all those years ago, and how desperately I hoped it was going to soon regain the blistering form it had had, just a few issues previously. We’ll just have to keep reading to find out if it managed to do that.