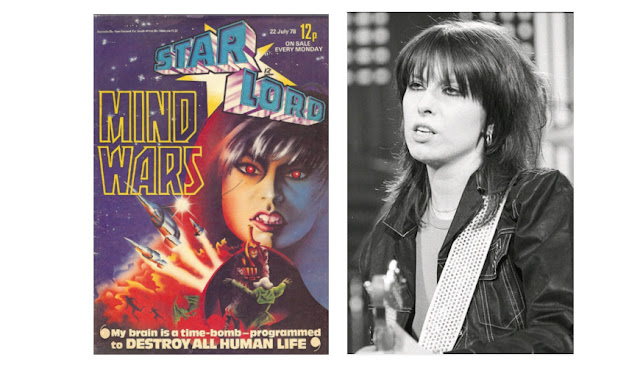 Back in 1978, when I was a kid, there was a sci-fi comic book called Starlord, and it was wonderful. Now, scans of just about every page of this comic book are available to read on the Internet, at Starlordcomic.com, and I can read them all over again. So that’s exactly what I’m doing, and I’m getting a twin jolt of fun, sci-fi thrills combined with warm and fuzzy nostalgia.

I’m not the only one doing such a dive into childhood nostalgia, of course, and today I was reading a post by another blogger who is reading all the books of the Star Wars EU, over at io9. It’s the sort of fun little challenge that goes well with sci-fi blogging, and I’m all in.

I’ve already read eight or nine comics of the sadly limited run this publication had before its untimely demise, and I’m still enjoying the experience every bit as much as I did issue one. So bring on the next issue of Starlord.

The 22nd of July 1978 issue of Starlord, issue 11 for those keeping count, is a strange one, and I vaguely remember thinking as much when it first came out and I got my hands on it at the local news agents.

The cover is a very strange thing done with an airbrush. The female face amid all the sci-fi action is the main character of the strip Mind Wars, but because the artist isn’t the same one who actually draws the story, so she doesn’t look anything like the character. I remember at the time thinking the art looked off, but now I think I know why. It looks like the airbrush artist of the cover wasn’t following the design of Ardeni from the comic, but was instead working from a photograph of Chrissie Hynde, including her late 79s ‘shag’ haircut.

I’m a big fan of Chrissie Hynde, but her look is nothing like what Jesus Redondo established Ardeni as looking like.

The airbrush art is so lacking in detail that everything just looks melted, but I remember that, despite thinking it looked odd, I did like that airbrush look back in the 1970s. Airbrushing was strongly associted with sci-fi  and I was pleased to see it on the cover of my favorite sci-fi magazine.

Enough about the cover, let’s crack it open. The first story presented this issue is, as always, Mind Wars, a story about force-like mind powers and spaceships that is very obviously inspired by the Star Wars mania that was still echoing through the popular culture of the time. This is the week where Ardeni is forces to kill her twin Arlen, and I remember being shocked at the time. It isn’t a comic book death undone by time travel or some other plot device. She is faced with the choice between killing him or killing Earth and she chooses the greater good. She uses her mind powers to stop him using his mind powers to drop a Domesday device into Earth’s sun.

Along with the exciting story, we also have the artist, Jesus Redondo’s little touches of genius. There are spaceahips, rendered in just a few lines and a wash or two of ink. I think it was Redondo that really started me drawing and designing spaceships, way back in the 1970s, and I have never stopped.

After the beauty and space-opera of Mind Wars, we get the equivalent of a short story, that revolves around domestic abuse. We see a 70s office worker in a suit with brill-creamed hair called Sheldon who is angry with his stereotypical housewife mate, smashing a plate of eggs in her face. He moves into an automated house, and this house gives him the pamering he feels his wife is incapable of giving him. The twist is that the house goes all Hal 1000, keeps him prisoner and pampers him to death. The whole thing is dull and the only futuristic things are an AI house and a virtual reality entertainment system the man uses to watch football. I can’t tell if we are meant to sympathize with Sheldon the wife beater, or be glad he has received some kind of comeuppance, and that is not the mark of a good story.

After this waste of time, we get to what I bought the comic for, back in those days. The next strip is Ro-Busters, and this issue we find a full-on robot rebellion in full, bloody swing. The very first image is if a giant robot killing humans. We have been through a couple of weeks of build up to get to here, but now comes the pay-off.

It’s nicely written stuff, including the robots killing catchphrase. He beats... as he kills… as you scream, which is bases on a 70s Hoover advertising slogan of the time. It beats… as it sweeps… as it cleans.

And also the slogan Quake-a-Mass reaches the humes other robots cannot reach.

There is plenty of mayhem intercut with a conference room full of robot manufacturers coming up with ways to reassure people that robots are safe. It’s very nicely written snippets of grisly violence, cut with snug industrialists smoking cigars, completely unaware of the chaos all around.

The story turns on the emotions at the end as the two robot heroes, Ro-Jaws and Hammerstein, are forced to turn in each other. Hammerstein has been reprogrammed by the leaders of the robot revolt while Ro-Jaws is trying to stop it. He’s not against bloody robot revolution, it’s just this revolt is a fake led by humans.

Hammerstein is an army-surplus war droid, where Ro-Jaws is a second-hand sewer cleaner, so the fight has an inevitable conclusion. Hammerstein kills Ro-Jaws. This turns out to be a typical comic book death that can be quickly and easily recovered from, but I didn’t know that at the time. I loved Ro-Jaws, and seeing him killed was a gut-wrenching experience for a young boy, especially so soon after Ardeni killed her twin, just a few pages before.

After such a draining experience, the next story is TimeQuake, which was my least favorite in the comic. I doubt I actually read it back them, more likely I just looked at the pictures to see if it grabbed me, and something tells me it didn’t.

It’s some batty stuff about Aztecs invading time and ascending to a new planet in flying saucers. It’s all very Chariots if the Gods. An interesting glimpse of its time, but it utterly fails as an engaging story and the art is only the top end of mediocre.

On the back we get a Hardware Profile, the very first of then, and it is delicious. It is a model of a futuristic fighting vehicle photographed out in the woods, and it looks great.

It’s like the Top Trumps of the time, which had a set dedicated to tanks, but it’s a future tank so it’s even better. I remember just staring at this picture, drinking in every detail. It is imprinted on my mind and I recognize it instantly. I cut it out and stuck it to my bedroom wall, just like other, less nerdy, kids were doing with pictures of pop stars and footballers.

The model is credited to Martin Bowen, but I’m guessing this is a misprint and they actually mean the model was built by Martin Bower, who was doing special effects work on shows like Space 1999 at the time. This is similar to his famous Laser Tank model for that show.