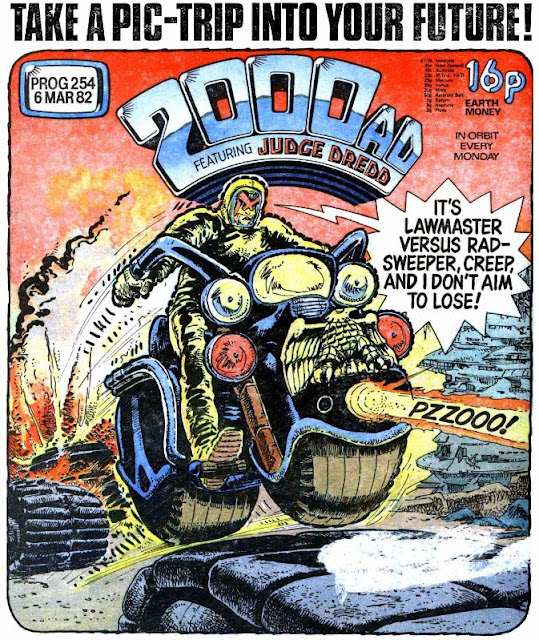 This Xmas, I've been reading comic books, both old and new, including a British comic book called 2000 AD. I particularly enjoy the old back issues of 2000 AD from the 1970s and 1980s, the comic books of my childhood, though they are a guilty pleasure to be sure, with vanishingly few passing the Bechdel test, little diversity, and even a helping of overt sexism and racism thrown in here and there that is potent enough to make you wince while reading them. 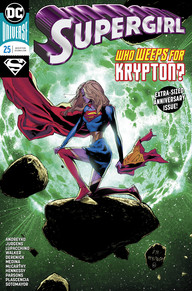 At these moments, I often turn to recently published comic books that, theoretically, are a lot more woke. For example, I recently read issue 24 of Supergirl and enjoyed it very much, so I picked up Supergirl 25. It has a great cover - a very different cover to issue 24 - and I like it because the sci-fi elements of Supergirl are played up, I mean... she is posing on a freakin' asteroid. You don't get much more sci-fi than that.

Unfortunately, the stuff inside doesn't live up to the promise of the cover. Before the issue even gets going, there is a full page given to some "art" that makes Supergirl look like a drunken My Little Pony trying to dry hump her superdog. It us truly awful. Then the story itself isn't much better. Supergirl has traveled to the asteroid swarm that is all that remains of Krypton, and local space is full of Kryptonite. Oh no! Supergirl is struck down. Seems like it might be a big problem, right? But no, she just puts on a spacesuit, and it filters out the Kryptonite, so that's a nothingburger of a resolution to the cliffhanger from last time.

The meat of the story then follows, but the entire issue is given over to Supergirl fighting somebody called Splyce - Caretaker of Krypton. I'm not kidding, the fight is dragged out to an entire issue. This whole comic book felt like filler, and even has me wondering if I'm going to stick with Supergirl.

After that disappointment, I was pleased to return to 2000 AD. Issue 254 has a bonkers cover that features a future lawman in a radiation suit, riding a hog with a laser on the front, as he jumps at a futuristic tank. Obviously, this ancient issue of 2000 AD is its usual hyper-macho, idiotic self, and I sink into it like an old duvet: something smelly, but familiar and comforting. Inside the comic, the action starts with Ace Trucking, drawn by Bellardinelli, which is a thing of beauty.


Along with the outstanding art, the story has a lot going for it too, even though it skews more toward humor than sci-fi thrills. In this episode, Ace's rival gets the better of him by calling a tip into the health inspectors and having his spaceship, the Speedo Ghost, fumigated. The Yellow Snork is soon overtaking the Speedo Ghost, as the bad guy enjoys his victory. 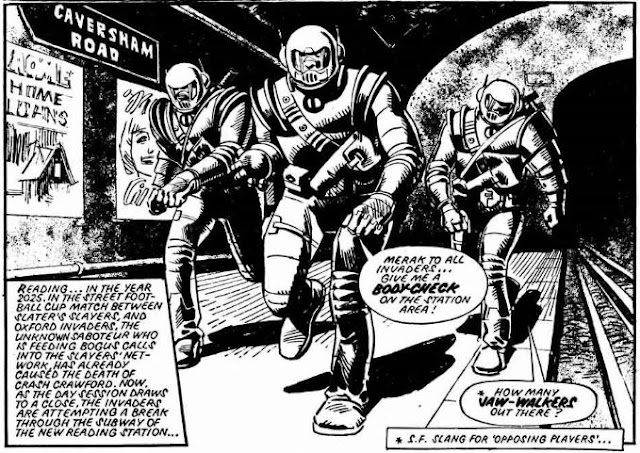 Then comes Mean Arena, which starts with art showing players in a subway tunnel that is beautifully atmospheric.The action in Mean Arena is as violent as usual, with mortars being used in the future ball game this week. There is also a one hour break between day and night sessions of the game. To start the night session, the ref drops the ball back in among the players from a helicopter. It's all like an armored version of The Purge, played between two teams, and I'm liking it more and more. It's a story that has really held up.

Nemesis the Warlock is next, and this issue it is set on a planet where terraforming got out of hand and covered the now abandoned cities with jungle. It's an evocative idea, and I wish Redondo was given more space to show it to us. The few glimpses we get are lovely. 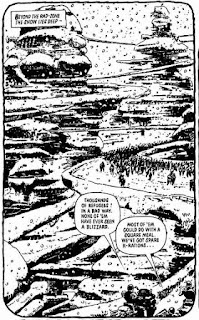 Then comes the story from the cover. It is part ten of the Apocalypse War arc, and it just keeps going and going. There are sublime moments, like the orange, radiation-suited, bikers, but there is a lot of macho craziness, too. For example, we get a scene where a convoy of citizens with radiation sickness ask Dredd and his team to shoot them, to avoid a lingering death, and they do it. And this is a children's comic book! But there is also a scene of snow covering the future city that is under attack, and it looks very festive and Xmassy to me, despite all the combat within the city walls. A mixed bag, in other words.

The comic book then takes a turn for the worse with a "humorous" short story by Alan Moore. He may be a giant of comic book writing but I do not rate him at all. I just can't work out why this third-rate hack with serious issues is so venerated. In the story, a guy called Snazz has been doing a giant Rubik's Cube for six million years. He is rescued and taken to Earth, where California, we are told, won World War 26, so we get a bunch of silliness, about jogging and a Jacuzzi the size of a lake, that never rises to the level of actually being funny. Snazz is bored, so he makes some giant tennis robots and we get a "joke" about John McEneroe's behavior at Wimbledon in the year this comic book was published. According to Wikipedia:

McEnroe was controversial at Wimbledon in 1981. He was fined $1,500 and came close to being thrown out after he called umpire Ted James "the pits of the world" and then swore at tournament referee Fred Hoyles. He also made famous the phrase "you cannot be serious", which years later became the title of his autobiography, by shouting it after several umpires' calls during his matches.

Next we get Rogue Trooper, drawn this issue by Mike Dorey, who is not my favorite for this job. His shading is atmospheric, but his line work is clumsy and his designs for future technology tend to be generic. The story is serviceable enough, but a story like Rogue Trooper lives and dies by the art, in my opinion. Speaking of art, there is something quite amazing on the back cover. 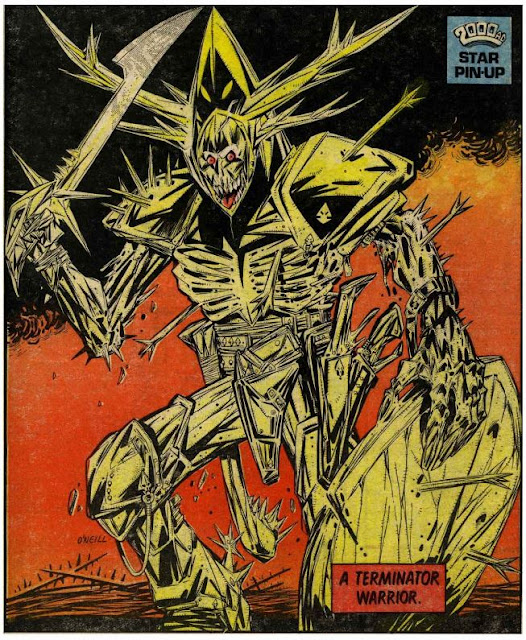 We are given a portrait of a Terminator Warrior. It is another showcase for O'Neil's awe-inspiring and detailed penmanship, coupled with his slightly shaky grasp of proportion and inability to draw dynamic poses. It is a beautiful example of O'Neil's work, and I remember spending long periods of time, as a child, just gazing at it in wonder. Vintage 2000 AD had its faults, but it regularly turned in exciting stories where things happened, coupled with amazing art, something that Supergirl 25 didn't manage this issue.
Labels: 2000 AD British Comic Book Prog Slog