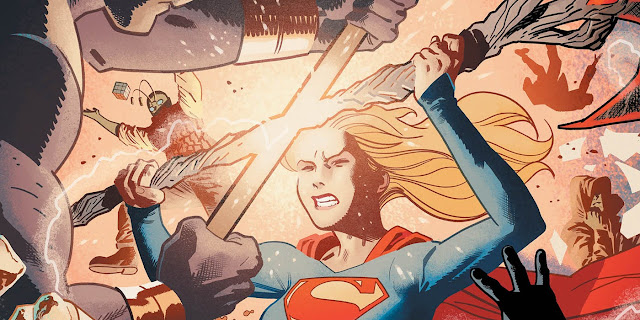 I just read an issue of Supergirl, and I enjoyed it very much, in fact I might just come back for more. I have tried a few times to jump on with reading Supergirl, and usually it is an enjoyable enough experience but, not good enough to get me to come back: but this time it might be different. I like a lot of things about this issue.

I like the old-school art on the cover. It looks more like an art print than a work of comic book drawing, with areas of deep shade and simple lines, but there is detail, too. They shouldn't, of course, but a cover matters a lot to me in enjoying a comic book, and this is a good one. It's by Evan "Doc" Shaner. He's on Tumblr, at https://evandocshaner.tumblr.com/ and http://comicsalliance.com/sketchbook-spotlight-evan-shaner/.

The story is called A Supergirl Walks into a Bar, and it starts in a pleasantly atmospheric way. It's a bit like the Cantina scene from Star Wars, which is no bad thing, with the strange-looking alien played by Ambush Bug.

Supergirl is there looking for somebody called Gogol Zaar but the bar steward and Ambush Bug claim they don't know who that is. The thing is, Supergirl can tell from their heartbeats that they are lying. She then puts the frighteners on everyone by burning a pattern in the floor with her heat vision. 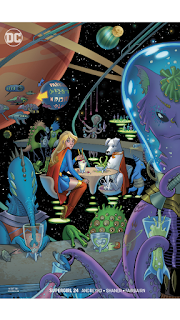 I must admit, I like this grim, driven Supergirl, who can wander into a bar and dominate it.

I'm a little worried that the story ends with Supergirl in space, struck down by some mysterious illness, because that's what happened at the end of her New 52 run, and I have to say, I didn't love it. I get the feeling this is just a fleeting, cliffhanger kind of thing, though, this time and I'm actually quite keen on picking up the next issue and finding out if my suspicion is correct.

Supergirl is a sci-fi superhero, especially in this story, and it is nice to see her zooming through space and kicking alien ass. The comic hints that the story is more complicated than just alien ass kicking, which is a plus, so it looks like I may be jumped on with Supergirl for the long haul.
Labels: DC Comics Supergirl