Here comes another post where I read a classic issue of 2000 AD from the 1970s and talk about it. Reading 2000 AD back then was a very formative experience for me, and I still read it today. I have a 2000 AD page where I link to all the issues I have talked about on this site, in case you want more posts like this (a lot more posts like this). 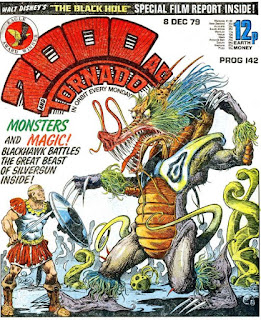 This particular issue of 200 AD has the type of cover I really like, featuring pretty much a full page of the action from one of the strips contained inside. It’s just a shame that the strip in question is Black Hawk. It’s cool that the main character of this strip is a person of color, and is being featured on the cover of the comic book, but unfortunately the strip itself is pretty bad and the alien monsters designed by the artist Belardinelli are often more whimsical than threatening. The monster on this cover is a particularly bad example. It looks like a friendly dragon from a My Little Pony cartoon, not a fearsome monster. 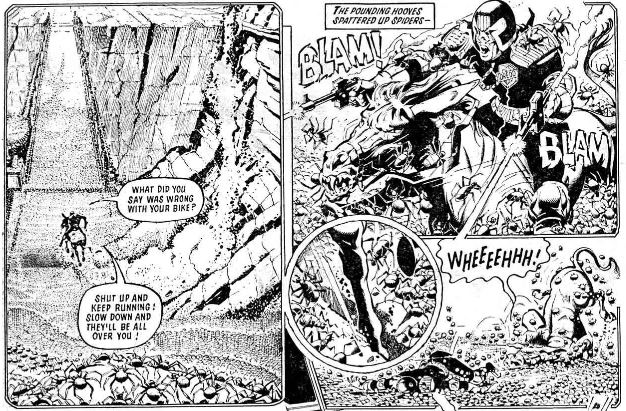 In the first strip this week Judge Dredd is still in the radioactive desert, rather than the megalopolis he usually inhabits, and his is still dealing with a spider infestation. It was an interesting idea for one strip, but after three weeks it is starting to get old. By the end of the strip, Dredd is riding a talking mule and shooting at a swarm of spiders… yes, that’s right… shooting… at a swarm of spiders. The whole thing is pretty dumb.

The next story up is the V.C.s, which ia a bunch of racist rubbish that I have very much taken against. It would take a lot to get me interested in it again. In fact, I was about to flick past the whole story when something about it caught my eye. The art. It’s by Cam Kennedy. I have been rereading classic issues of 2000 AD for a large number of posts now and this is the first strip by Cam Kennedy that I have come across. He is another one of the A-list artists who were working on 2000 AD back then, and this is, I’m guessing, an early outing for him. The influence of McMahon on his work is very clear to see, with some frames being so indebted to the quirks of McMahon they are pretty much indistinguishable from the master’s own work. 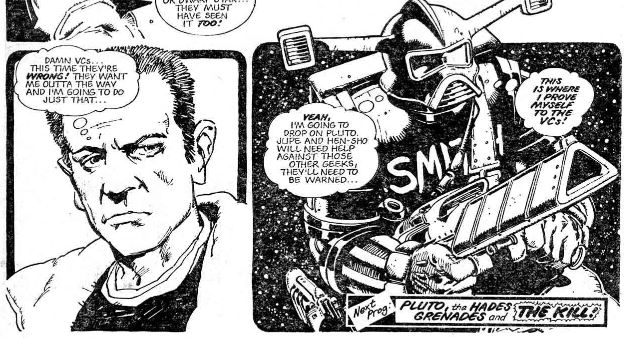 Perhaps the influence I’m seeing is just the fact that a lot of the equipment of the V.C.s was designed by McMahom in the first story, because there is also the unmistakable visual language of Cam Kannedy on display, among the McMahon inspired equipment and fashion. Before putting on his armor, for example, a character will look unmistakably like the work of Can Kennedy, but with the armor on, it becomes more difficult to immediately tell if the drawing is the work of McMahon or Kennedy.

This episode didn’t bandy about words like half cast, so it was leagues ahead of the two that have gone before in previous issues. I might stick with it, to see if it gets its act together. Maybe somebody had a word with the writer, G Finley Day, and told him to cool it with the racism.

Next we have a film review of the Black Hole, a Disney sci-fi movie, but the review is done by Ro-Jaws, 2000 ADs sewer robot with a faulty politeness circuit. The joke is that Ro-Jaws thinks the robots are the stars of the movie and, you know what, I tend to agree. It is many years since I have seen the movie, but I was much more impressed by the robots when I watched it than I was by any of the humans. 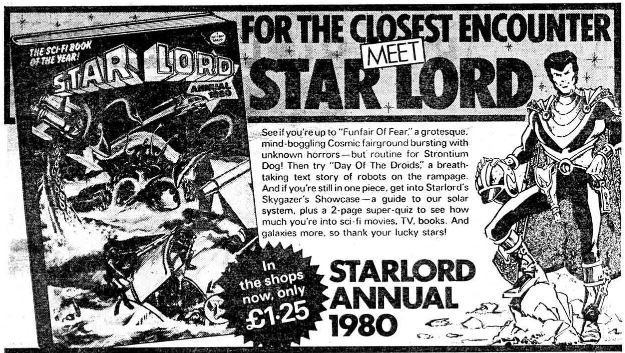 Then there is an ad for the Starlord annual, which would be coming out that Christmas, even though the comic itself was already dead by that point. I had that annual and read it many times, just the words Funfair of Fear in the ad copy sent shivers of recognition down my spine. 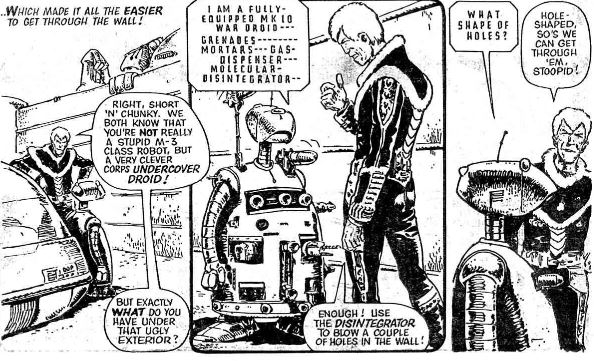 Next comes a comic book adaptation of The Stainless Steel Rat, and it opens with a panel about how ludicrous the idea of space battles between mile-ling ships might seem, before assuring us that such battles are very real in the future depicted in the strip. There are no ongoing wars at the moment in time of the story only because building warships above a certain size is forbidden, an idea straight out of the period between WW I and WW II. Unfortunately, of course somebody is building one and the Stainless Steel Rat is sent to investigate. There is a nice exchange where he asks his robot to blow a couple of holes in a wall, and the robot asks what shape the holes should be. He also looks very fetching in a skins tight admiral’s uniform with a fur collar as he commits the break in, too. It is a really entertaining story, if a little old-fashioned, even for 1979. 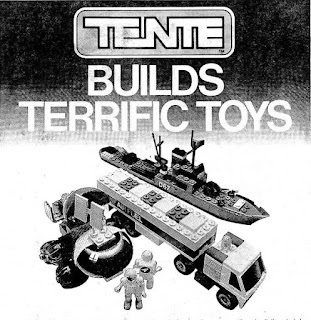 In this issue there is also an ad for something called Tente, which looks like it was a competitor to Leggo. I had forgotten it existed, but that pod-like sci-fi vehicle looks pretty good. This was a classic issue of 2000 AD, and I enjoyed reading it a lot.