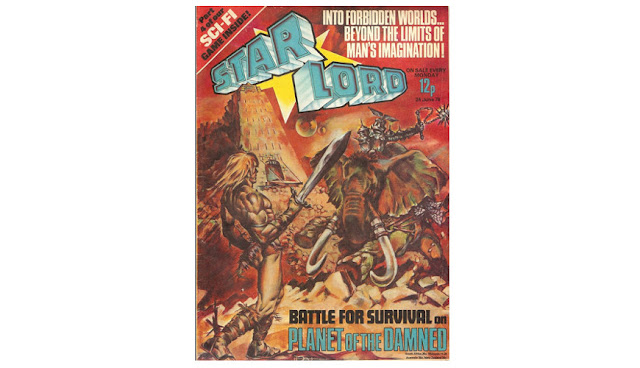 I’m currently revisiting part of my childhood by rereading a comic I haven’t read since 1978. You can read along with me, thanks to the sterling efforts of the people behind Starlordcomic.com, which hosts scans of the comic book for browsing. I have already read issues one through six, and now it’s time for issue seven. Before I start, though, I must mention that 1978 was a very different time. The world has moved on in so many ways since then, so I always wonder, when I start reading one of these issues, whether it will hold up. So far it has held up pretty well, so fingers crossed for this issue.

The date is clearly visible on the cover, and it dates this issue to the 24th June 1978. You're The One That I Want by John Travolta & Olivia Newton-John was number 1 on the charts, while The Smurf Song was number 2. The Flashing Blade and Kojak were on TV, Jaws 2 was on at the movies, Evel Knievel was a folk hero and we all wanted his action figure and bike. But, over and above all these cultural highlights, Star Wars was still casting a long shadow over the entertainment of the time. We’ll see that, I’m sure when we start reading. So, here goes.

For only the second time in the comic’s run, this week the cover relates to a scene from one of the stories within. It’s not a great illustration, though I suppose the painting of the elephant is dynamic. There more good covers coming in the future (actually the past) so, thankfully, we don’t have to spend long on this one. Let’s open the issue up. 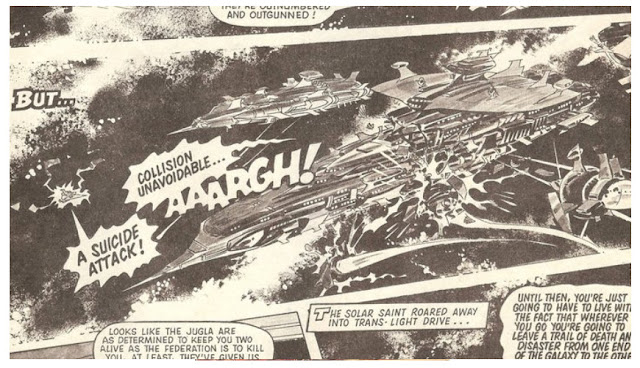 As usual, Mind Wars is the first comic strip, and it is the one that most closely follows the sci-fi template set by Star Wars, with desert planets, alien cantinas, mind powers and all the rest. Obviously, I absolutely loved it, and I’m enjoying rereading it. I have praised the art of Jesus Redondo on this blog before, but this week I would like to give special mention to his ability to draw spaceships. I spent many years trying to draw spaceships the same way, and still do when I’m putting a spaceship down on paper, rather than designing it in 3D in Blender. There is a mix of smooth metal panels and abstract greebles that works very well. I especially like the larger spaceships he draws, such as the Strike Ships that blow up the planet the heroes have just escaped from.


The next strip is Ro-Busters, a story about a bunch of second-hand robots, used as expendable rescue workers when future disaster strikes. This week, our disaster is aboard an orbiting, fully robotized, hotel: The Space Ritz. 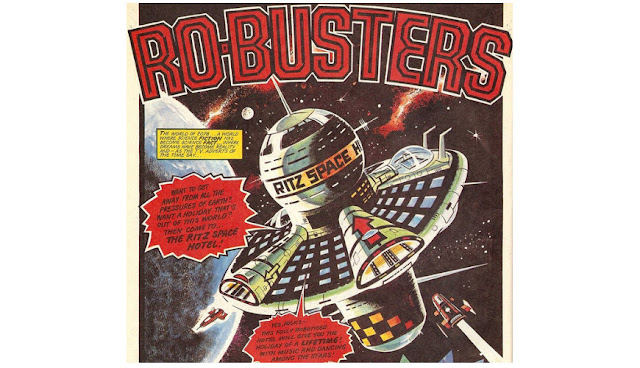 It is lovingly imagined as a cross between a luxury hotel, the house of the future, and Westworld. Even the robots you play tennis against are programmed to lose, to increase your holiday fun. The hotel’s motto is:

A robot holiday means less to pay and more time to play.

It’s in this story that the comic starts to show it’s age a little, with depictions of female characters that are all about the male gaze. Illogically you even have robots catcalling and honking their horns at human females, which doesn’t make any sense at all. They have to be threatened with destruction just to stop them wolf whistling.

Thankfully disaster strikes, and we move from 1970s sexual politics to action. One of the hotel robots goes on a killing spree and leads a robot revolt. The robots of Ro-Busters hear about suspicious activity and go to investigate. Hilariously, a robot called Ro-Jaws compares their mission to being a detective, like Starsky and Hutch. The show was huge back then, and we all loved that car. I’m pretty dubious about how likely a scenario it is for a robot from the year 2078 to be watching Starsky and Hutch on video tape, but I didn’t even notice the anachronism back then.

This episode is all set up for stuff to come, apart from the reader being allowed a glimpse of the start of the robot rebellion, and I am looking forward to all the action I can imagine for next week’s installment. 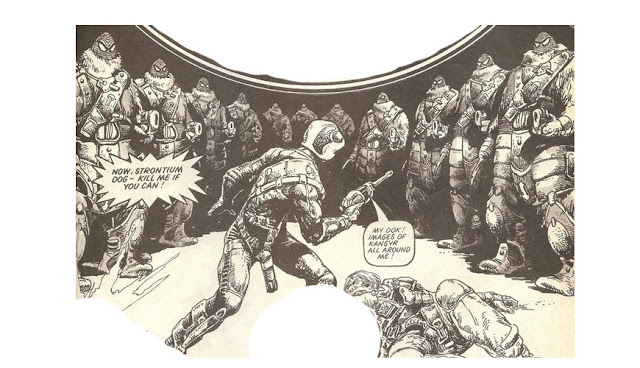 Next comes Strontium Dog, a story that started in Starlord back in 1978, and is still going strong. There is even a fan film based on it, that is surprisingly good. As usual the art by Ezquerra is moody, organic and dark, just the way it should be in this dystopian future. This week’s story finishes with a very effective image of Johnny Alpha surrounded by mirages of the bad guy. The alien design Ezquerra has come up with is bulky and intimidating, and very effectively makes you feel that our hero is in trouble.

The next story is Planet of the Damned, which started out strong, but this week has another installment that isn’t up to the promising start. Here we have a ridiculous scene where our hero brings down an elephant by smacking it on the leg with a sword. I remember that, even as a kid, I just didn’t buy that.

Then comes the last story in this week’s issue, TimeQuake. I’m not a fan of TimeQuake, but ter was one moment in this episode that I liked. One of the Time_Control Operatives is a woman who can shapeshift, which reminded me of Maya from Space 1999, who has the same powers, and also rocks a futuristic uniform. Starlord really is steeped in its time, this issue more than many, and that makes it even more fun to read, at least for me. I’m looking forward to the next one already.
Labels: Prog Slog Starlord