Here we go again with a post about an ancient copy of 2000 AD. Reading this comic book was a very formative experience for me back in the 1970s and 1980s, and I still read it today. (I have a 2000 AD page where I link to all the issues I have talked about on this site so far.) Issue 20 has the second of the comic's experiment's with 'super covers' on the front, and it is certainly intriguing. 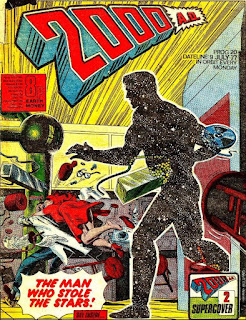 It shows some kind of horrible accident in a lab during an experiment in super science. It's the kind of thing you might expect to see on the cover of a Weird Tales magazine, which is fine, but for 2000 AD it is a wasted opportunity to show off one of the unique characters and concepts in the comic book's ongoing strips.

The first of those strips presented this issue - bumping Invasion from prime position - is something very exciting. 2000 AD might have been launched to specifically cash in on the craze for sci-fi sweeping late 1970s entertainment because of Star Wars, but there was another blockbuster that had recently had such a huge effect that it was also still reverberating through the world of British comic books. That movie was Jaws, and it had been successfully cloned in a comic book called Action as a strip called Hook Jaw.

Hook Jaw was the star of his strip, and his strip was the most popular in the comic book, and that comic book was a market leader so influential it had made a splash in mainstream media. The newspapers and moral crusaders of the time considered it too bloodthirsty and anarchist in its world view, forcing it to be withdrawn from the shelves, for the violent chaos to be toned down (a little), before it was re-released to ongoing huge sales.

Against that background it is no surprise that 2000 AD would try to have their own version of mega-hit Hook Jaw. Instead of a ravenous shark, however, they decided their bloodthirsty beast would be a polar bear named Shako. Using a polar bear is actually an inspired choice because the story then takes place in the horrific and howling wastes of snow that the TV show The Terror just exploited so successfully. If Hook Jaw is Jaws, then Shako is the mutant monster bear thing from The Terror - sorry - spoilers. 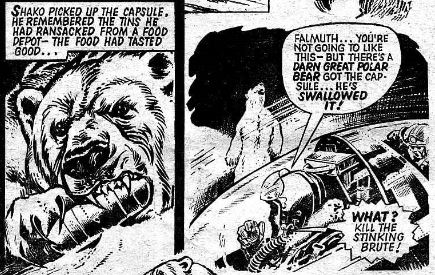 Any strip in 2000 AD has to be given at least a thin veneer of sc-fi, so there is some guff in Shako about a top-secret capsule, but it's just window dressing. This is a horror strip starring an unstoppable animal that could have appeared in any contemporary comic book and been successful. It didn't have to be put in 2000 AD, we're just lucky it was.

The first episode is mostly setup, but even so an unlucky pilot who crashes his plane on the ice is having his face torn off by Shako before the end of page two. This strip is setting out its store to be bloodthirsty fun, right from the get go. I'm sad that Flesh finished last week, because it was a dinosaur strip and I do love dinosaurs, but a polar bear carrying out grim killings on the gloomy ice of the Antarctic is a worthy replacement.

There is a strange moment of calm and beauty among the mayhem when Shako is hunting seals. One of the seals turns suspiciously as Shako approaches, and the giant bear crouches down and hides his black nose with his paws. It's a strange image, and my Internet research says it's a myth, but it is an arresting moment nonetheless. It's a change of pace like this that makes the endless series of bloodthirsty killings all the more terrible. Shako racks up a body count of six, not including the seals he kills, in this episode alone. 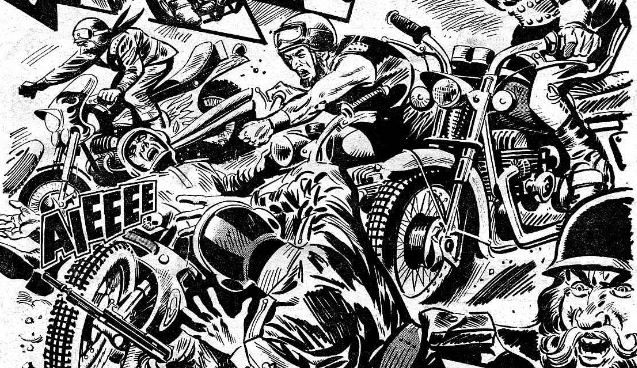 After being bumped from first position, Invasion proves the editors still have a lot of faith in it by arriving in the second spot. This episode is motorcycle themed and doesn't make a lot of sense. The biker gang depicted helping the resistance to the Russian - sorry Volgan - invasion of the UK behave and dress like a bunch of Californian beatniks, and they are proud of only riding British bikes. I'm guessing the writer was not pleased about the invasion of Japanese bikes that was destroying the British motorcycle industry at around this time. Invasion sometimes rises to being enjoyably mediocre but this episode is just bad. 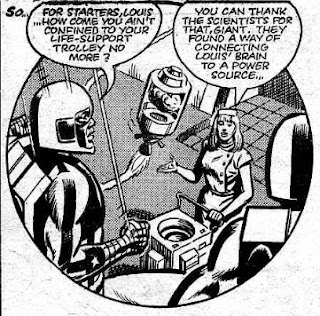 Next up is Harlem Heroes, which started out as a fairly straight-laced story about a future sports team but is getting more bat shit bananas with every installment. I must admit that I like the more off the wall direction it is taking. This issue has a brain in a jar attached to a rocket motor that jets about like a little missile yelling at the team. That is Doom Patrol levels of nutty, and I'm up for it. The strip also has several black characters and an honest to goodness female character, doing a lot to cut into the otherwise almost total lack of diversity in this comic book that is a problematic fave of mine. 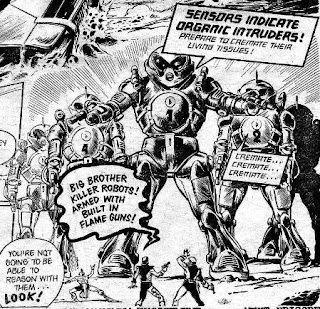 Next comes the editorial page, which I usually skip but this issue it has the story to accompany the 'super cover' so I took a look. The story is a work of micro-fiction, only five paragraphs long. It's not terrible, but is in no way deserving of being featured on the cover of the comic. Dan Dare is next up after that, and the story is as generic and forgettable as usual. It was a nice surprise, however, right at the end to see the strip introduce a squad of giant robots as the cliff hanger. I'll be interested to see how Dare deals with them next issue. I also like that their 'cremate' catchphrase is similar to the 'exterminate' battle cry of the Daleks. Mach 1 comes next and it is a very confused and basic story set in some country that is a mix of both China and Japan. It is not a classic of the Mach 1 run so far. Some of them have had some spark of macho fun to them but this one is a little flat.

The last story however is wonderful, a little tongue in cheek, but wonderful. In this episode of Judge Dredd there is a gang pushing comic books from the 20th century (no prizes for guessing which one - that's right 2000 AD itself in a very meta twist). They are so good that they are addictive, apparently, and they are being distributed as slugs of microfilm, each one containing a whole comic book! It's silly but fun. 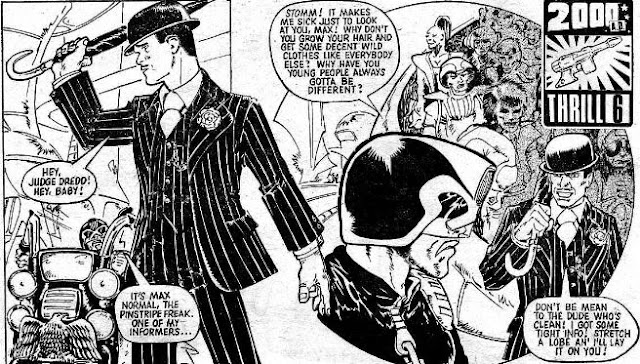 This story also sees the first appearance of Max Normal, and I hadn't realized until reading this that he is supposed to be a kid. Judge Dredd and the other background characters of the city are respectable adults and so they are dressed in pleather and Lycra catsuits with long, feathered haircuts for both the men and women. It's a future where everyone dresses like a glam rocker. Max is a rebellious teenager so he is dressed as a 1970s bank manager in a pinstripe suit, bowler hat, shirt, tie, briefcase, and umbrella. Again, very much an arch idea, almost Monty Python in its silliness, but I think it works. It helps that the strip is drawn by Mike McMahon, and his amazing art style can sell almost anything. 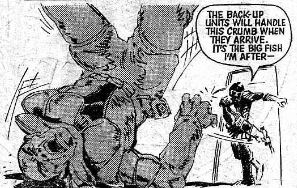