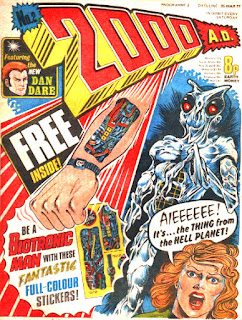 This post I am reading issue number two of a comic book that has a very special place in British publishing. The comic book is called 2000 AD, and it has a similar importance in comic books to that of Doctor Who in broadcasting and television. I read issue one recently, and the next logical step is now to go on and read issue two, and then continue reading issues of this venerable comic book until I have caught up with over forty years of its history, rereading some issues and reading others for the very fist time. That is such a mammoth undertaking that it doesn’t bear thinking about. The current issue of 2000 AD is Prog 2086, which means that 2,806 issues of the comic book have been published since the beginnings in early 1977. Maybe I will read this giant body of work, and maybe I won’t, what I do know is that I am definitely going to read all the issues through the 1970s and 1980s, my childhood and young adulthood in other words. 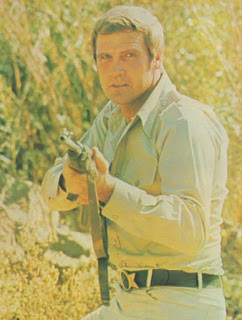 Just like the first issue, last week, most of the cover is obscured by where the free gift was attached. This time it's stickers to turn yourself into a “biotronic” man, obviously very much inspired by the Six Million Dollar Man. If you weren’t there it is hard to imagine how popular this show was with 2000 AD’s target demographic, young boys. The Six Million Dollar Man was one of those decade defining television series that stealthily infected a nation of sci-fi hungry children. Entire playgrounds of them would be running in slow motion while humming the show’s theme tune. The Bionic Man’s feats of super strength, super speed, and super seeing were always accompanied by slow-motion photography and a cool repetitious space age sound effect that caught every young boy’s imagination.
Steve Austin, Astronaut – A man barely alive . . . Gentlemen, we can rebuild him . . . we have the technology. We have the capability to make the world’s first bionic man. Steve Austin will be that man. Better than he was before, Stronger, Faster.


The bionic man used his super strength and ultra-fast running ability to fight everything from terrorists to mad scientists to popular-culture monsters. In my opinion, the shows high point came when Steve Austin did battle with the Sasquatch. The Bigfoot episode contained several scenes with a spinning luminous tunnel that was burned into my childhood brain. 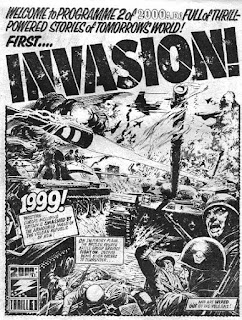 Again the first story in this issue is Invasion, and again it is brutal, macho and jingoistic. I can't wait for strips like this one to be phased out. In one panel, Savage, the hero, takes out four enemies with a double-barrel shotgun. Even in a stupid story like this, that is just a shoddy action scene. 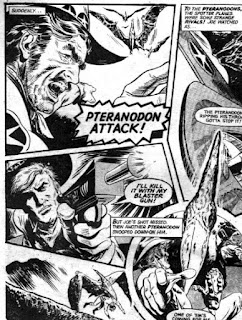 Flesh on the other hand is great. It adds yet more sci-fi concepts this week, introducing something called a fleshdozer. This is a giant robot with grabber arms and an open hatch in the front with a chopping and mincing machine inside. We see one of these machines malfunction spectacularly, dropping a ten ton styracosaur on one ranger and picking up another ranger to be hurled onto the whirling knives in its gut. As a vegan, I'm having a lot of fun reading this. It does a great job of capturing the horrors and amorality of the meat business. The lack of respect for human life is particularly bad in this episode as the decision is made to package the consignment of dinosaur meat tainted with human flesh and send it to the future for consumption. Deliciously grisly. 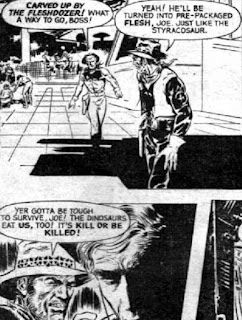 By the end of the episode the rangers are back out on the prehistoric plains, looking for dinosaurs to round up for the fleshdozers. They use spotter plains to find a herd of alamosaurs, but the planes are attacked by petranodons. It's bloodthirsty action all the way, and a lot of fun. 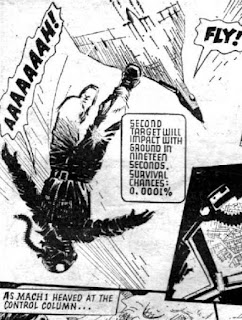 Next comes MACH 1, and where Flesh has fun with different dinosaurs, MACH 1 is the same but with cars, motorbikes, and jets. This issue we see a Nimrod chasing the Vulcan bomber hijacked last issue, and catching it. These two aircraft may seem antiquated in comparison to today’s stealth fighters and drones but they were cutting edge when this comic book was published. MACH 1 then jumps between the aircraft and rips his way in through the Vulcan's aluminum skin. It's all Mission Impossible style action, and the jets are beautifully drawn. MACH 1 terminates all the terrorist with extreme and gleeful prejudice, and takes back control of the Vulcan, allowing the UK to sleep safely in their beds. 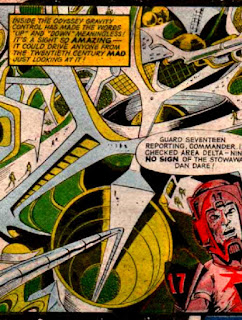 Next comes Dan Dare and Belardinelli goes to town on the futuristic technology. The spaceship interiors he creates are so complex and convoluted they are like Escher drawings. The exteriors are strange, too, like deep sea fish. 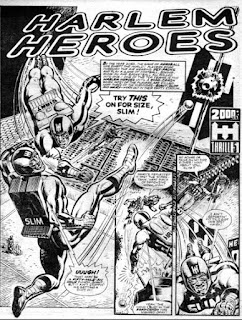 Next comes Harlem Heroes which is about a team of future basketball players, where it is a future version of basketball, played with jet packs. Most of the characters are black, which is a cool touch of diversity for a British comic book of the period. This comic may not be going to pass the Bechdel test but at least it is not uniformly white. I'm not a big fan of sports stories but this one is engaging enough, if a little formulaic. 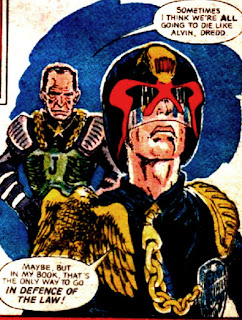 Next we get the first appearance of a character destined to be more important to 2000 AD than any other, Judge Dredd. Dredd does not appear until issue two because it was difficult for the team at 2000 AD to find a strip which would provide a good introduction to the character. The story chosen to introduce the character was extensively re-written, with input from various writers. It was drawn by then-newcomer, the comic book art genius Mike McMahon. It's a pretty perfunctory story, in the end, and I've read it before in reprints but it is amazing how much of the Judge Dredd universe is already here in place, almost fully formed. We already have a Chief Judge and an enormous city with city blocks and roads crisscrossing the sky. Dredd’s gun also already has the dial on the side for selecting ammo type. The end of the story is actually really good, in a twisty kind of way. The criminal from the story is dumped on a traffic island from which there is no escape.
Issue two is a very dated comic book, but there are stories in here that you wouldn’t get in today’s world. The sheer craziness and dinosaurs of Flesh are a great example, and I really had fun reading that strip.