This post is about a comic book. I'm still reading old (like this one came out in October 1983 type of old) issues of a comic called 2000 AD. I write a lot about 2000 AD, reading it back in the day was a very formative experience for me, and I still read it today. I have a 2000 AD page where I link to all the issues I have read and talked about on this site. I have to say, though, that it has been a rough ride lately. These old comic books can have some nasty racism and sexism issues, but it is a problematic fave, and I'm sticking with it. Let's hope this one is a little better. 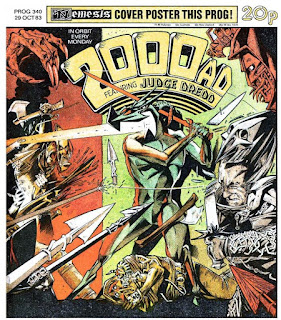 The cover is beautifully drawn, even if Nemesis is naked on it. It's a little disconcerting that Nemesis has no pants on, and that he has no genitalia at all, like a Ken doll. It's a wraparound cover poster, and it just looks great. The colors are moody, and the way Nemesis is in a shaft of light among the gloom says so much about his role in the story. He is bringing light to a dark galaxy.

Inside the comic, the first story is Judge Dredd, which ended last time with a classic cliff hanger: Dredd was falling to his death from a collapsing building. The resolution isn't great. He simply grabs a railing and stops his fall. The story then carries on with its premise, that the city is a vision of hell. This is the sixth episode, with disaster after disaster, fought by brave peace officers but with no regard for human rights nor due process. It's like America, if you believe Trump's American Carnage speech.

The city even has a wall, with the nuclear wasteland called the Cursed Earth on the other side, and they put the irradiated mutants trying to get into the city into cages. Reading this strip about an American city as a vision of hell must be something like the way MAGA people experience life every day, because that's what the Fox News bubble is telling them. It's horrific, but it makes for a damn good story. 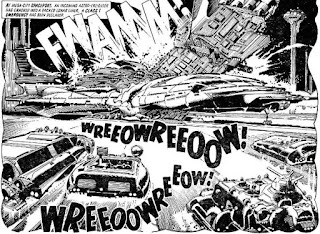 Ron smith's art complements this hellish city perfectly. For me now he is the default Dredd artist, not as gifted as giants like McMahon or O'Neil, but perfect for Dredd. His art gets out of the way and let's the story take center stage. This is classic Dredd. 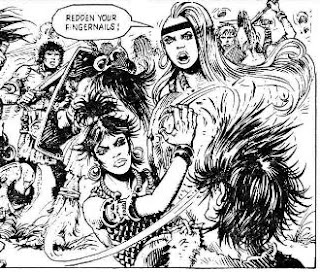 Slaine cones next, drawn by Belardinelli with his usual cast of Romance Novel cover barbarians and supermodel shield maidens. He undeniably puts a lot of effort into his work, but everything is so shiny and the people are so healthy looking that it kills all the authenticity.This is hard to believe as a medieval world, which should be full of diseased and dirty denizens, not these beautiful people.

Even if you look past the art, the story is total baloney, but it does end with a good cliffhanger. Slaine gets himself trapped in the head of a burning wicker man. Hopefully the resolution will be more satisfying than Dredd's cliffhanger escape that opened the comic book. 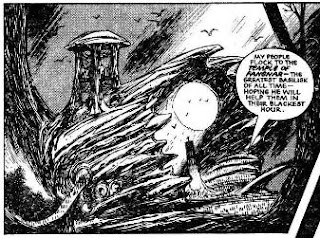 Next comes the cover story, Nemesis the Warlock, and O'Neil's art is, as always, a pleasure to simply gaze at. The action this week is set in a castle carved from a giant tree, and we see a lovely brachiating gondola, with Art Nouveau decoration. Nemesis is still naked, and still has no obvious junk. It does make you wonder about his alien anatomy, purely out of scientific interest, obviously. 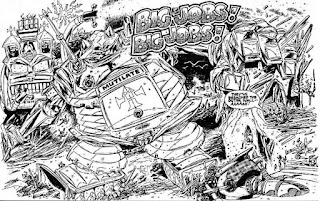 Half way through, this story unleashes a huge surprise. Mek-Quake is back, now in a new and improved giant-robot body and it is an imposing design. I like it but I think it would have been better to have kept Mek-Quake's original form, drawn by O'Neil its original creator. 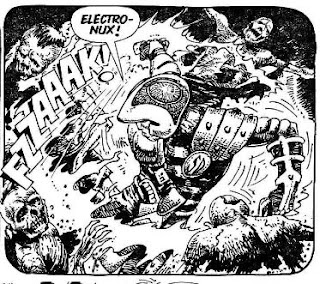 Strontium Dog comes next, with a great story that is unfortunately centered round a big bad that looks a lot like a racist stereotype. Like I said, these old 2000 ADs have been a rough read lately. On the plus side Johnny Alpha uses his Electro-Nux, which are super cool.

The current terrible Rogue Trooper story keeps stumbling forward. There is some nice, atmospheric art by Brett Ewins here. I've always found his style inexact and unskilled, but sometimes he nails it and produces some very successful results. When it cones to line work, he can't compete with McMahon or O'Neil, but he does have something. This episode, for example, he creates some very nice seascapes. The poisoned, Scum Sea never looked so brooding.

In another frame he uses Cam Kenedy's designs for "Atmocraft" and they look great. But then he designs the cockpit interiors and pilot costume himself, and they are a weird, steampunk mess that doesn't go with the exterior. That's okay for some strips, but not for Rogue Trooper. In Rogue Trooper the military hardware is like one of the characters, and the artist leaves a hole in the story if they don't dedicate some effort to learning how to get it to look right. Drawing comic books is about more than just anatomy and shading, it is one of the mist rigorous disciplines of the art world, and sometimes Ewins doesn't do the work. 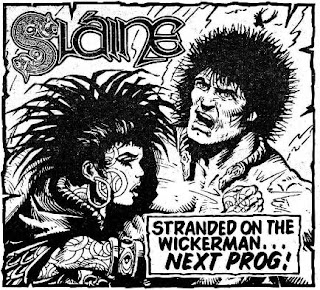 We'll be back next time to see how Slain gets out of his cliffhanger. To end, just a reminder that the best way to support this blog is to buy one of my books. Simply go over to Amazon, or Kobo and get one.
Labels: 2000 AD British Comic Book Prog Slog