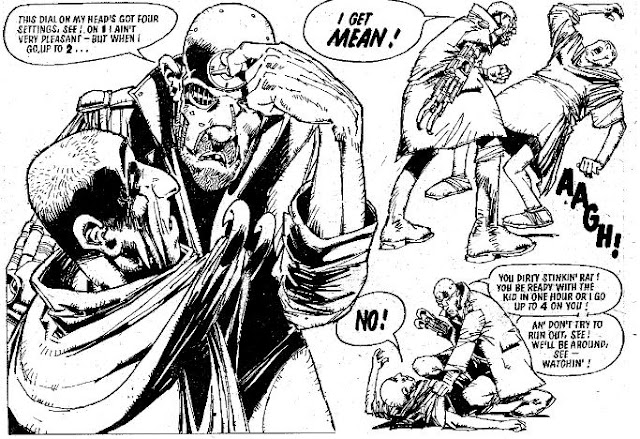 There is a comic book that has been published in the UK since the mid 1970s, and that comic book is called 2000 AD. I write a lot about 2000 AD, as reading it was a very formative experience for me, and I still read it today. I have a 2000 AD page where I link to all the issues I have talked about on this site. In this post I'm writing about an old issue, number 160. 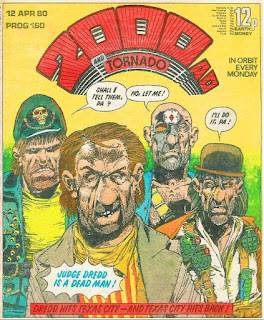 This issue has an amazing cover by McMahon.These guys are pretty generic baddies, n matter how well they are drawn. All except that guy right at the back. The guy with the metal face. He has what it takes to be a star.

Robohunter is the first story, and it is unfunny and lame. Here you see the hero being thrown in the harbor by robot gangsters wearing cement boots, but hilariously they are shaped like actual boots (oh dear).

The V.C.s is the next story and it has great art by Can Kennedy but that’s all it has going for it. It manages to avoid bandying about its usual racial slurs this episode, which is a plus, but we have an educated officer saying his troops “flaunted” his orders. Oh dear, the writer of this pap, Finlay Day, mustn’t have been too bright, on top of all the racism. It’s a real shame that such great art is wasted on this story. 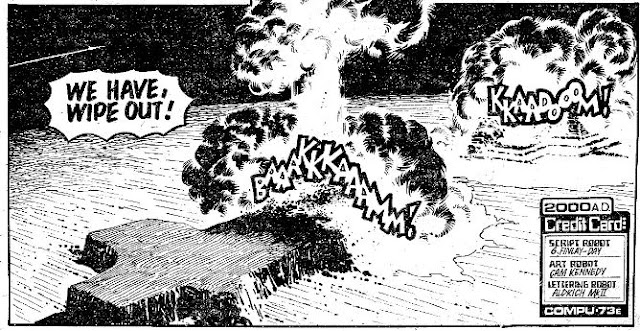 
After two such lackluster stories I’m proud of the childhood version of me, because this was one of the issues of the comic I didn’t read when it was first published. It is only my stupid, adult urge for completeness that is keeping me reading now, instead of sensibly skipping ahead until it gets good again, like I did when I was a kid. 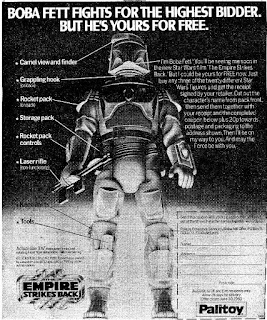 I was interested to see this advert for Boba Fett. It was priming people to look for Bob before Empire even started. He was already a star, and all based on a cool outfit. 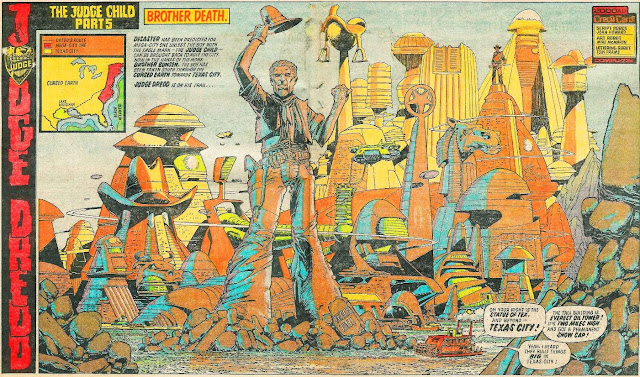 The Judge Dredd story this week marks the point where the Judge Child saga really starts to get going. Instead of workaday Ron Smith, we have the talented Mike McMahon doing the art, and Texas City is an interesting addition to the future world inhabited by Judge Dredd. The double page spread showing the Texas city of the future is a little tongue in cheek, but it does set the scene nicely. 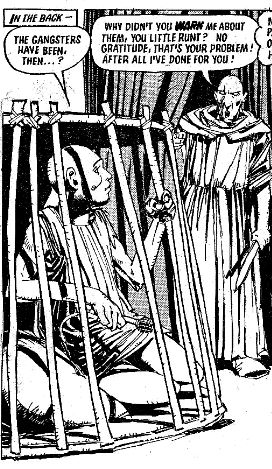 In a fascinating little aside, there us mention of a building so tall it has a permanent covering of snow at the apex. This is because everything is bigger in Texas. This is the sort of sci-fi with a dash of humor I come to 2000 AD for. It is funny without trying too hard - like Robohunter. The computer Dredd uses is also a beautiful piece of retrofuturism, and with a story that isn’t written by a racist simpleton like Finlay Day, I can relax and enjoy these little details, rendered by a brilliant artist, that make this sci-fi comic such a classic. This strip is also the introduction of the Angel Gang, who will go on to be classic 2000 AD characters. 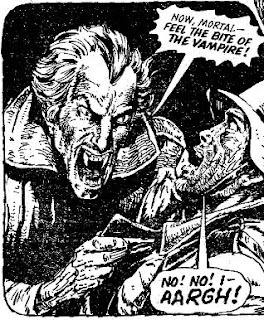 Next comes Fiends of the Eastern Front, a horror/war story that isn’t to my taste and Black Hawk, which is a bunch of sword and sorcery... in space.

Both genres, though not my favorites, can have a place in 2000 AD, if done well. But Fiends of the Eastern front is too much like a typical WWII story of the type popular in the 1907s for my taste and Black Hawk is batshit crazy, and not in a good way.