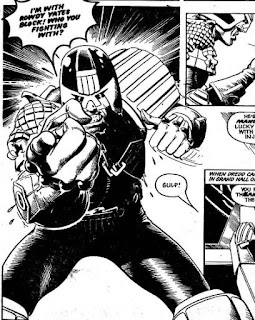 I’m reviewing a comic book in this post, but not a comic book that has been published recently, oh no, quite the opposite: the comic book I’m talking about in this post was published a long, long time ago. This issue of 2000 AD – a weekly British science fiction-orientated comics anthology – came out on the 26 December, 1981, when I was just a kid. Back then, I had to walk the dog down to the newsagents, and buy the comic with my pocket money, but now anyone can get it with the click of a mouse, from the excellent BritishComics at Wordpress archive. The issue I’m interested in today is number 244, so let’s download it and take a look. 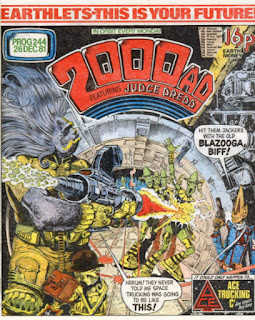 Belardinelli is back on art duties for Ace Trucking this issue, as can be seen from the cover. It shows some action in a sci-fi corridor, and there is a lot of gorgeous detail. It’s not a classic cover, but not a bad one either. I'm already excited to see what is inside this comic book.


The first strip this issue is Judge Dredd, and it is drawn by another very important artist, Brian Bolland. I appreciate his art, but I am not a fan, and I will never forgive his involvement in Batman: Killing Joke. His line work, though, is just a pleasure to behold. It is dense, mannered, and precise. Dredd pointing at the camera is a thing of beauty.

This strip is followed by a stupid Xmas story, that I didn’t bother to read either then or now. I don’t think I would bother with it even if it was Xmas right now. 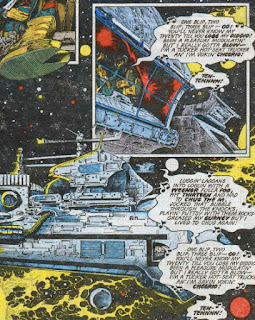 Then comes the story featured on the cover, Ace Trucking, drawn by Belardinelli, whose work is uniquely well suited to this strip. The spaceships he draws are old school, irregular lumps of industrial architecture. I particularly like the tiny bridge of the ship called Speedo Ghost, and the massive engines. This is a freighter on a very different scale to the comparatively tiny Millennium Falcon, for example. Despite these realistic elements, this story is a strange "comedy" strip, starring a pointy-headed alien, who speaks in a made-up CB language, and I like it a lot. This issue's lugjacker spaceship, with giant pincers on the front is inventive and great. It is detailed enough that I feel I can see every panel, but still expressive and imaginative design.

After Ace Trucking comes a few pages given over to a review of the year that smells of filler to me, but if it means the artists and writers get some time off at Xmas, I'm okay with it. This is shaping up to be such a great issue, that a little filler is easy to live with.

Then comes Nemesis the Warlock, drawn by O'Neil, one of the highlights of this – or any – issue. It is just so imaginative, dark, dense, and strange that it is like a body of legends for another world, like Tolkien at his best, with awesome illustrations. 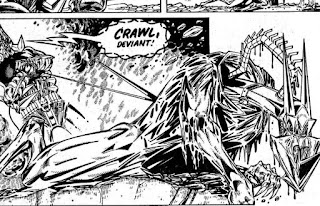 This issue, Nemesis and Torquemada are still beating the hell out of each other in a fight that started last issue. There is a particularly delicious panel at the bottom of the first page, with both characters dressed in leather, spikes, and straps, with lots of naked skin, and Torquemada commanding Nemesis to: Crawl Deviant!

It's kinky, sure, but just understated enough that it completely swooped under the radar of my younger self in 1981, the first time I read it. Now, as an adult, there is no ignoring the subtext of imagery like this. Luckily the kink isn't usually as overt as in this panel. 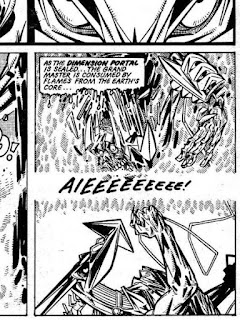 Some panels, like one at the bottom of the next page, have a very stylized disregard for realism. What’s happening is the bad guy is being burnt up by the flames of the Earth’s core. But the panel does not try to show a realistic image of what this might look like, instead it illustrates an idea. It is like an image from an illustrated work of folklore. Nemesis the Warlock being, probably despite itself, a very sophisticated work of art, at least by the standards of 1981. 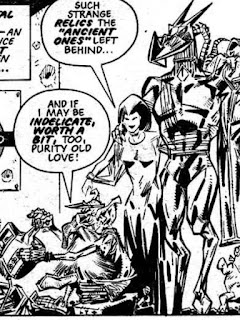 Unfortunately, it then takes a hard downward turn into the old trope of Jewish people represented by a big-eared, long-nosed, money-grubbing species of aliens that is to be found spattered all across sci-fi and fantasy, both back then and ever since. On the other hand, there is a female character this issue, just one, but that puts it ahead of almost every other 2000 AD story of the period in representation of women. This comic at this time was very far from feminist and had real problems with race from time to time. There is a lot to enjoy, but moments of distaste like this often crop up, too. Anyway, the Jewish alien is collecting relics of the lost ancients, and the ones he is most interested in are ugly 1980s kettles with flowers on the side, for some reason. It would be a nice conceit, minus the racism. 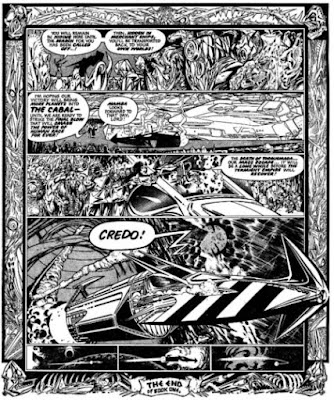 Then comes a page designed with a futuristic, illuminated manuscript border, that is dense with beautiful detail. The aliens look great, the technology looks great, and Nemesis's craft, the Blitzspear looks amazing. It really is a high point of O'Neil art. 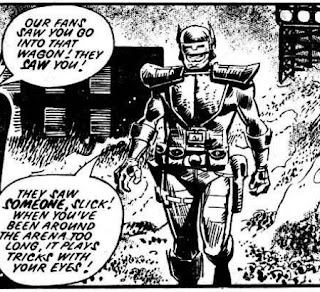 After the mannered art of O'Neil, the brutal and simplistic work of Mike White is quite a change of pace, but it looks great. I doubt he would be able to cope with a strip like Nemesis the Warlock, with its Gothic designs, but he is perfect for rain-soaked, post-industrial wastelands stalked by bands of tough guys in cool armor. There is actually one female character among the men battling in armor among the grime, but true to 2000 AD form, they don't bother to give her any dialogue. That's not to say this story is bad, it isn't.

The hero is a morally ambiguous serial killer with a hit list of people to take out, who he blames for the death of his brother. The pacing is great, and the action is exciting; bad it is not. This is the strip that tempted me back to 2000 AD after giving up on reading it for around a year, and there is a reason for that. This installment, for example, does a very effective job of singing the praises of the strip's main character, Matt Talon. We see him reborn in fire, and decide – unusually for a vengeance-driven comic book hero – to leave his quest for revenge unfinished. Luckily for the story it seems the remaining people on his hit list don't know of Talon's decision and have decided to take him out before he gets round to them.

The mayhem will continue in the next installment, we can rest assured about that.