This issue of 2000 AD, the 246th, came out 9 Jan 1982, and I remember that my feelings about it were colored by what was happening on TV. Just a few days later season nineteenof the original run of Doctor Whostarted, and the first episode of this series is the one where TomBaker's interpretation of theDoctor is retired. We see him for the last time lying under a radio telescope he just fell off of, and I remember that I did not like it one bit. I did not like losing the old doctor, and did not like the young whippersnapper they got to replace him.

To my mind he did not have the gravitas of a Doctor Who. You can see images of Tom on the grass at Tygerwhocame2t.com. Doctor Who had changed and would never be the same again, and I think 2000 AD might have, in contrast, appeared to me to be a rock of unchanging sci-fi goodness. Sure, the stories came and went, but it was always the same old 2000 AD. It still is, in fact. It is still going to this very day, and still features Judge Dredd, just like back in 1982.

We can see from the cover that in this issue we have an artist returning who I absolutely loved when he worked on Mind Wars in Starlord, a talented guy named Jesus Redondo. It was disappointing, sure, that he was taking over Nemesis the Warlock, because he was replacing the genius that is Kevin O'Neil. I suppose that, even at the time, I had some awareness that O'Neil and his rabidly detailed work took longer than the pages of other artists, and that he wouldn't be doing every episode of Nemesis the Warlock, every week. I did hope and expect that he would be back soon, however. In the mean time, Redondo was no slouch and I was happy to see his work. 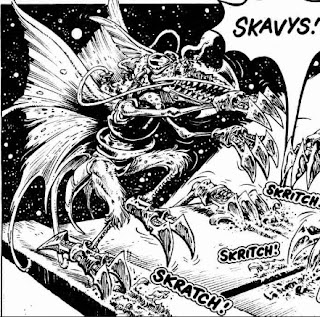 First up is not Nemesis the Warlock, however, it's Ace Trucking Co. I was a fan, I remember, and this one is starting from a strong cliffhanger last issue, when Ace and his associates had a run in with pirates and were jettisoned from his own spaceship in a garbage pod. The pod floats in space, and is then found by creatures called Skavies, which are like alien vulture things that can fly between planets, and have what look like steampunk spacesuits. They are a beautiful idea, a little like the creatures of the Cthulhu Mythos that can fly through space, such as the Fungi from Mi-Go.

Next comes Mean Arena, a strip that has its moments, but is very much a 'B' story. Mike White, the artist, fits the story very well, because he is not 'A' list. This issue he draws some future fashion that is pretty hard to look at, even in black and white. He is good at rendering tangled metal, urban blight, and the face of grizzled hard men, but anything more speculative is a reach for him, and fashion is very much outside his comfort zone. The writer on the strip is a guy called TomTully, and the storytelling is so haphazard I was intrigued to find out who he is. According to Wikipedia:

> Tom Tully is a noted British comic writer mostly of sports and action stories. He is probably most famous as the longest-running writer of the popular football-themed strip Roy of the Rovers.

I guess, if he usually wrote sports stories, it made sense for him to be working on Mean Arena, but he is even more pulpy than the usual writing in 2000 AD. The story is completely derailed half way through in a weird section where the upcoming matches are drawn, featuring strange teams made up by readers of the comic. It is all so bizarre, I totally enjoyed reading it. We also get to meet the club's sponsor, a hideous fat man with a leisurewear company. He’s so grim and small-tine that he is very believable for a sponsor of future sport based in the UK. 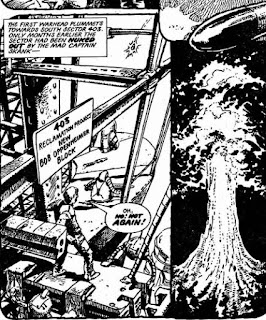 Next comes a Future Shock by Alan Moore, with artist Paul Nearly, who is unfamiliar to me, making this a real nothingburger of a strip. The twist ending is that a sci-fi writer has an alien typewriter. Groan. Luckily there follows something that is much juicier. Dredd is next, and it continues the gleeful, blow-by-blow account of a nuclear attack that started last issue. Hilariously, we see a nuke drop on an area of the city being rebuilt after a nuking just months earlier in a preceding story. 2000 AD is nothing if it isn't bloodthirsty and packed with mayhem. There is a great scene where a block defense force, infected with block fever uses a sonic canon to deflect a nuke, and they celebrate at the nuclear inferno they cause. It is pantomime ultraviolence, and as an adult I'm not sure how I feel about how gleefully it is presented in the comic book. It's like Itchy and Scratchy, but with nukes. It got me thinking that a kid, which is what I was when I first read this, has to be pretty sophisticated to read this type of stuff and not be traumatized by it.

Then starts Nemesis the Warlock, the strip from the cover, with it's new artist, Jesus Redondo. I have to say that Redondo makes a reasonable stab at imitating O'Neil's trademark of extremely detailed and fanciful aliens. He also brings a naturalism and ability to convincingly render anatomy and faces that was always problematic for poor Kevin. The story however isn't - it initially seems - even about Nemesis the Warlock. It's about the bad guy, Torquemada, and not even as an adult, as a kid. On the other hand, there is a star galleon on the second page, for example, that is amazing. It has a superstructure like a cathedral mounted on the hull of a ship. I remember trying to draw something similar myself, and spectacularly failing. All my drawings were like cack-handed scribbles in comparison to the way Redondo uses expresive lines to suggest monumental architecture. Torquemada is betrayed sold into slavery, grows into a youth and escapes, all in a few panels. I love the pace of storytelling in old comic books. Stuff happens. A lot of stuff, and there is a nice, bloodthirsty battle between Torquemada and a manticore, where the boy bites the monsters tongue before butchering it. That's a gross and inventive detail, and who knows where the writer, Pat Mills, got it from, but I approve. 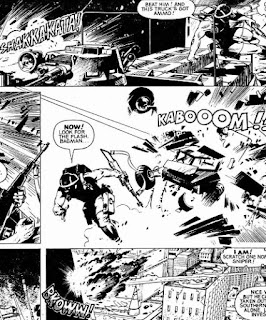 After Nemesis, there is another strip that I remember being very impressed by the art of, when I was a kid. It is drawn by Colin Wilson, and it is an impressive mix of precise draftsmanship and realism, that is probably achieved by copying photographs. The future tank in the background of the first panel is, for example, a very ordinary Britishchieftain tank ofthe 1970s and 1980s. Somehow the strip goes from there to proto-cyberpunk.

It’s intriguing, to say the least. Okay, that’s enough for this post.