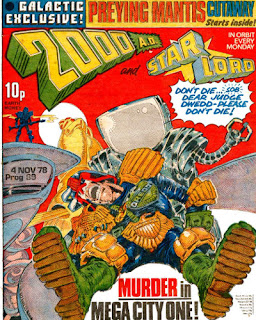 As a kid, I used to read a comic book called 2000 AD, and I'm reading a bunch of them all over again. I write a lot about 2000 AD, it was a very formative experience for me, and I still read it today. I have a 2000 AD page where I link to all the issues I have talked about on this site. I no longer have my own back issues, but I found some scans that I've downloaded and I'm reading on my phone using Bubble.

The cover of issue 89 is a wonderful work by possibly my favorite of the entire school of late 70s, early 80s 2000 AD artists, Mike McMahon. He is a British comic book artist best known for his work on 2000 AD characters such as Judge Dredd, as in this cover, Slaine and the ABC Warriors. His early style was influenced by Carlos Ezquerra, in fact McMahon was chosen for Judge Dredd because he could do a passable imitation of Ezquerra's style, but the more he drew the character, the more his own style emerged. McMahon became the regular artist on Judge Dredd, and his work developed a quick, spontaneous approach that verges on the messy. His figures from this period are lean and androgynous, like the 70s pop icons of the time. 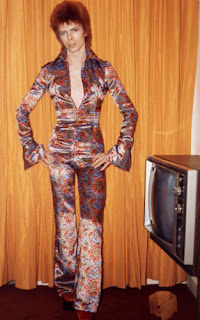 The 1970s weren't all Woodstock afterglow and flower power, this was the Glam era and it saw the rise of a new style of skinny masculinity. The wardrobes of David Bowie and Bryan Ferry were about sartorial escapism and the blurring of gender lines. It was a style that was theatrical, visually excessive and artificial. The mainstream of popular culture, with the work of David Bowie and the New York Dolls was about Glam. But glam was more than an aesthetic. It was more like an attitude, a particular way of thinking about visual culture, identity, and personal style. 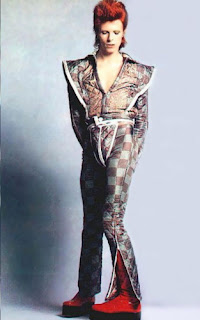 During the 1970s, ideas of androgyny and gender ambivalence were pushed into pop culture. Glam was a period of artifice. The early 1970s was a time of social and political unrest in the UK, and Glam seemed to offer an escape to fantasy. You can see the influence of all this in McMahon's Dredd. 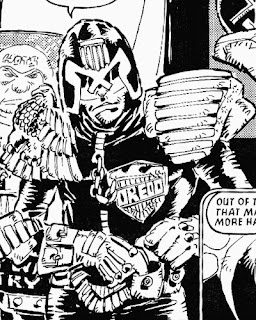 Like Bowie, Judge Dredd is extremely thin. Record producer Tony Visconti claimed Bowie snorted enough cocaine to killed a horse. Bowie's transvestite lover, Romy Haag, who he dated in 1976, said he wasn't doing lines of the drug he was doing bowls of it. Bowie ended up being scarily thin and would often be awake for several days at a time. With the shaggy hair and skeletal thinness, McMahon's art is a real document of this time. 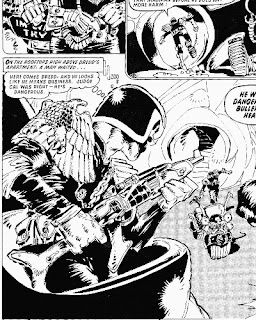 Later, in the early eighties, Mcmahon's art will take a high contrast black and white direction that explores patterns of flat color. That work is great too, but this early style is my favorite McMahon. I'm tempted to include every panel of this story, illustrated by McMahon. Every inch of it is beautifully shaded and drawn with real bravado and insight. 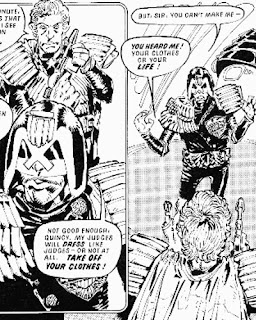 By the end of the installment it looks like Dredd has been killed. We see a bullet go right through his head, leaving him lying on the road in a pool of blood. It's the kind of cliffhanger that has you scratching your head, wondering how the writer is going to weasel out of that. 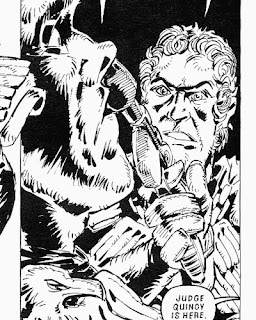 This story has a classic nemesis, in the shape of Chief Judge Cal. We see Judge Cal, with a Roman emperor haircut, shoving a gun in the face of one of his minions, pushing the man's nose up. It's a beautiful drawing, with menace and absurdity in equal measure. 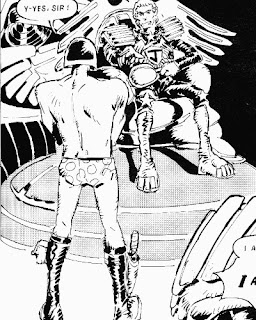 Cal then makes one of his judges disrobe because there is a button missing from his uniform. I had completely forgotten about this plot point, but it came flooding back as I saw the judge's patterned briefs. Seeing the skinny man in underwear, with a helmet on and boots with guns attached was quite a jolt of nostalgia. There is more to 2000 AD than Judge Dredd, of course. There are always four or five stories in every issue, and next up is a classic strip, Ro-Busters. One of the robots in the Ro-Busters squad is an ex war droid, and this issue is part of an ongoing story where he is telling old war stories. 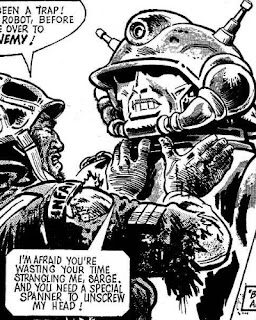 
The art on Ro-Busters is by an artist called Mike Dorey. I don't remember him being in the comic much, but apparently he worked on most of the British boys comics of the 1970s and 1980s, and he had lengthy runs on many classic characters. There isn't much information about him online, at least that I could find, and he seems to have been a journeyman artist rather than one of the stars, like McMahon, Bolland, or O'Neil. 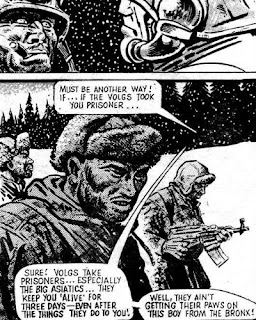 The mix of dark, shadowy forms and deep snow he creates for this story looks great, and though there isn't much detail in the technology, Dorey can really set a mood. I was quite enjoying the strip, but then a squad of the bad guys, the Volgans, were described as being "big Asiatics", which sounds pretty racist to me. The way they are drawn isn't very appetizing, either. I'm also quite fearful that this will almost certainly not be the last time I encounter distasteful attitudes in these old comics. They are replete with sexism, and there is sometimes an undercurrent of racism to go with it. Every time I encounter it, I ask myself if the amazing art of McMahon, for example, is worth dealing with nasty attitudes like these. I'm soldiering on for now, but this stance is always under review. 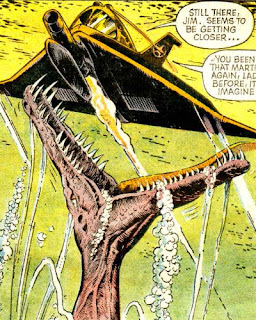 Next comes Flesh, a story with time travelers and dinosaurs. It's a lot of bloodthirsty fun and an opportunity to relax. Among other craziness, the jaws of the dinosaurs in the story are strong enough to crumple the vehicles used by the visitors to prehistoric times, and chew them up. 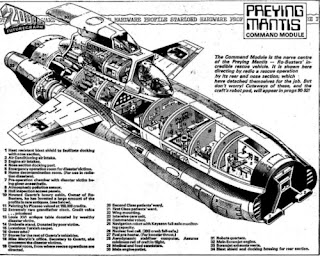 Then comes a cutaway of one of the vehicles seen in the Ro-Busters strip on a regular basis, the Preying Mantis. You certainly get a lot for your money with an issue of 2000 AD. You get the stories, but you also get a fun extra like this cutaway, too. 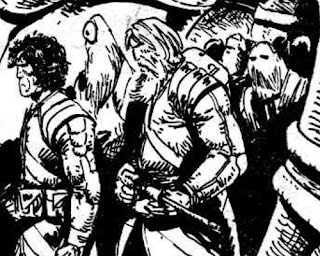 In Strontium Dog, Johnny and Wulf are being trained to be members of a sort of enslaved fighting force, invading planets for a bunch of warlike aliens. The evil aliens haven't just captured humans to fight for them, there are captured aliens too, and Ezquerra draws them in a very naturalistic way. He's a talented artist, an old master, and you can see why McMahon would want to be influenced by his work. 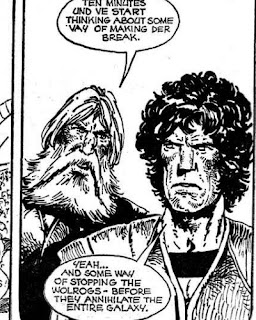 Johnny Alpha is a rough and windswept young man, here looking more like an older Mick Jagger. His futuristic coat, with shoulder guards and big stripes is great, and the spaceship corridors Ezquerra draws are as organic as an endoscope movie. Johnny has the coolest look of any of the characters in the comic this week, and I remember how impressed I was by his outfits and attitude.

The sense of nostalgia at reading these comic books after so much time has passes has faded a little but sometimes an image comes along, an image so iconic, and yet forgotten, left somewhere at the bottom of my subconscious, unthought-about for decades, that it causes a huge momentary rush of nostalgia, no matter how much time has passed, and no matter how much I think I have gotten used to reading these old comics. 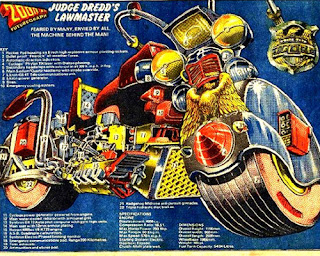 One of these images is Judge Dredd's motorbike. The bike was modeled very heavily on a Harley Davidson, but because different artists have different levels of skill, and all take different shortcuts and exaggerate different elements, it mutated over time into a more generic, futuristic bike. Here, in this poster, its roots in American chopper culture are very obvious. It's a lively, detailed image, and I remember gazing at it, back in the late 70s, probably with a big smile on my face, and some Glam Rock playing in the background. 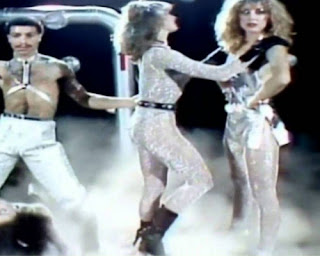 Or I might have more likely been listening to something stupid, like I Lost My Heart to a Starship Trooper, a 1978 song performed by Sarah Brightman and Hot Gossip, which reached number six in the UK Singles Chart the week this comic came out. It's a disco track, a piece of fluff written to cash in on the hype surrounding the original Star Wars film. I seem to remember liking it, and I was into anything even remotely connected to Star Wars. More vintage 2000 AD soon.