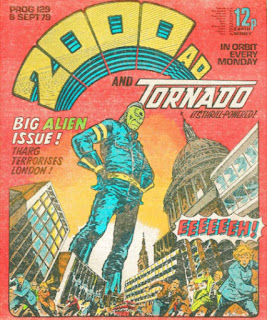 Reading 2000 AD was a very formative experience for me back in the late 1970s, and I still read it today. I have a 2000 AD page on this very blog where I link to all the issues I have so far talked about, but my relationship with this comic book has seen some ups and downs. For example, after a couple of issues that shook my younger self’s faith in 2000 AD, this issue came along – issue 129 – and it got me excited about the comic book again. It is not a perfect issue, not by any means, but it does have one moment of greatness. It has an episode of ABC Warriors within that is so amazing it is worth buying the comic book for all on its own, even if the rest varies in quality from ho-hum to execrable.

Execrable: If something's execrable it's really and truly, unbelievably, absolutely the worst. Execrable is often used as a harshly critical term in the arts, when a reviewer really wants to throw the book at something. Not surprisingly, the word comes from a Latin word meaning "to utter a curse; to hate or abhor." 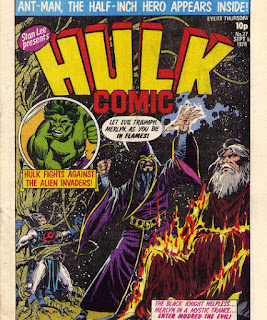 Nowadays, we don’t have to buy the comic, of course, it is now available as scans on the Internet to be freely downloaded by any nostalgia-stricken sci-fi geek who wants to read it. Things were very different back in early September 1979, though. Then I had to decide whether to spend my 12p on 2000 AD, or something fun like Whizzer and Chips, or maybe even something with American-style superheroes in, like Hulk Comic, which has both Hulk and Ant Man inside, all for only 10p rather than the 12p price of 2000 AD. A comic book had to work pretty hard to retain my interest against such competition.


Things don't start out well. The cover of the comic is an absolute low point. It features the comic book’s ridiculous alien editor, Tharg, so basically it is wasted, along with six more pages inside where we get a story about Tharg being omnipotent and annoying. I don’t read comic books for unfunny stories about comic book editing, at least I didn't back in 1979 when I was a kid. 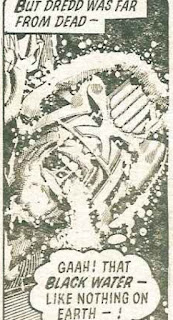 Next comes the star power of Judge Dredd, who in this issue's story has once again been retooled as a fleshy rather than muscular superhero, in a story that started out strong last week but goes off the rails a little here. It isn't actively bad like the Tharg stuff, but it isn't great either. While reading it, one frame did resonate with me. I remember the first time I read it very well, I remember staring at it, intrigued by what I was seeing. Judge Dredd has fallen into polluted water, but improbably his helmet has stayed on (we never see Joe Dredd’s entire face in the comic) and the air is coming out of his lungs in a jet like stream. Despite all this he is supremely unperturbed. It is so unreal but so real for the character. I remember staring at it, and trying to emulate the way Ron Smith draws bubbles, but it was a little beyond my own drawing abilities at the time. It’s nice to see it again and be reminded of all this. 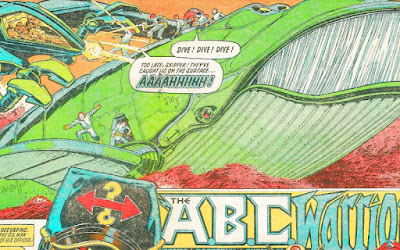 Then comes the reason I even bought this comic book, an absolutely sublime episode of ABC Warriors. The team of robot fighters is going to Mars, and is becoming a lot more sci-fi than it has been up to this point. Hammerstein has really mutated from a near-future retired war droid working in disaster areas. He is now a far-future special operative in a setting that opens with a scene reminiscent of something from the sci-fi classic, Dune. 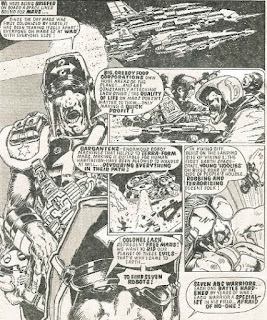 The new ABC Warriors strip outlines its Mars setting in a single tight page of absolutely beautiful world building. There are giant robots, cyborg animals, and warring megacorporations, and we will find out more about all this as the comic strip continues. What’s more, it is all drawn by my personal favorite 2000 AD artist, of any era, Mike McMahon. I remember I was virtually salivating after reading this. I could hardly wait to read more. 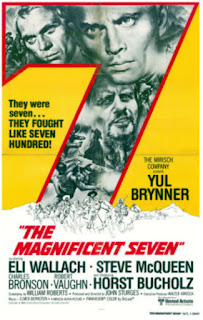 It is obvious now that this is the plot of Seven Samurai, by way of The Magnificent Seven, but that was lost on me at the time. I just found myself wondering how seven robots could stand against this entire planet of chaos and terror. After setting all this up, there is still time for a little story with a crash landing, and an encounter with some mutated Mars settlers. It is a truly great episode of ABC Warriors.

After that the comic book goes downhill again, with what we would now call a YA strip about a kid with mind powers that is okay, but not great. Then comes Disaster 1999! which is, as usual, a complete waste of space. I didn’t care though, and I handed over my 12p with glee. I was still hooked by 2000 AD, despite all the filler in this issue. All it takes is one exceptional strip to make a comic book a must buy. I can’t wait to see where the ABC Warriors go first in this setting.