I have written a lot about 2000 AD on this blog. (I have a 2000 AD page where I link to all the issues). And as I foolishly attempt the Sisyphean task of reading every issue of the comic book called 2000 AD ever written, and hen blogging about them, it occurs to me that a few themes have emerged in my thoughts on each issue. I talk endlessly about my love of the work of McMahon, how problematic a lot of the stories are, in terms of race, gender, and a whole bunch of other stuff, and how the covers are often inexplicably terrible despite the stuff inside being so good, and I could continue to talk endlessly about each of those subjects, but I don’t want to continue doing that. It is really hard but today I want to come up with something new to say about this comic book.


Let’s start with the cover. I love it. It is not drawn well, and the artist was no futurologist either. His depiction of space suits, alien spaceships, and space wreckage are all extremely generic, but there is just something so deeply terrifying about this starship crew member’s predicament. The idea of ending up floating through the emptiness of space on a fragment of spaceship hull is truly terrifying. 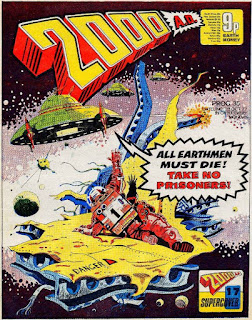 It is such an extreme experience that it is almost sublime. Hopefully that is a concept I haven’t mentioned in any of these posts, so far. For anybody who is unfamiliar with the idea it is a kind of awe derived from experiences that is so extreme it provides contact with some higher power behind the experiences.

The idea of the sublime was popular among European Romantic artists and is closely connected with the notion of terror. Images that brought to mind ideas of fear, awe, pain or danger were considered a source of the strongest emotion the mind is capable of feeling, which was termed the sublime. But the sense of being at a remove was also crucially important. It allows us to take enjoyment from perceiving such things rather than feeling directly threatened by them. 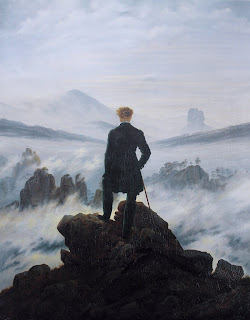 The painting Wanderer above the Sea of Fog by the German Romantic artist Caspar David Friedrich is a famous example of this idea. Like this 2000 AD cover, the central figure is located in a precarious place with their back to the viewer. They are gazing out at an unknowable landscape and are tiny and insignificant in relation to it. The composition elicits a sense of Kantian self-reflection and a metaphor for the unknown.

This comic book cover is such a powerful image, but is drawn by such a pedestrian artist, that I began to suspect is was likely inspired by something the cover artist had seen somewhere else. I did some googling, but if there is an original I couldn’t find it.

The first story this week is Invasion, which has a strange story about tough-guy lumberjacks being unwilling to join forces with tough-guy oil men to fight the Russian-ish forces that have invaded the UK. It is decided that the leaders of the two factions will have a fist fight to settle their differences before then joining the resistance against the invaders. It’s a story that is an inspired kind of lunacy. It makes no sense at all but it is certainly readable. There is also a twist at the end that I didn’t see coming, where it turns out the leader of the resistance betrayed the leaders of both factions to get their men to unite to save them, and it worked, and everyone is okay with it. Amazing.

Next comes Judge Dredd, drawn by Ian Gibson, imitating McMahon’s style. Unfortunately for Gibson, McMahon’s style is inimitable. No mere mortal can ever draw with the same assurance and inspiration as the sublime hand of McMahon. Fittingly the bad guy in the story, Judge Gibson, is named after the artist. He sorts out his differences with Dredd by fighting him, just like the oil men and lumber jacks in the previous story, and pays with his life. I do enjoy these bloodthirsty stories of the early issue of this comic book. They are real artifacts of their time.

The third story presented is Shako, a wonderfully bonkers yarn about a force-of-nature predator in the mold of Jaws. This is the last installment and sees Shako’s end. A harpoon to the heart doesn’t finish him off but he does eventually fall when he is hit by a bazooka. Nothing like Shako will ever be written again and it is genuinely sad to see his passing. 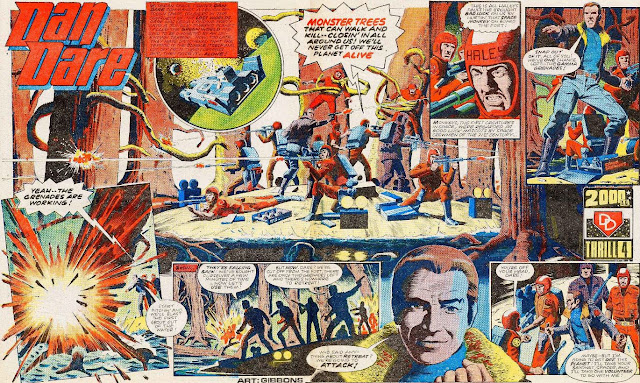 Dan Dare comes next, and it is beautifully drawn by Gibbons, in his usual disciplined style. Dan and his crew are fighting trees this week, which doesn’t make for very dynamic action, unfortunately. 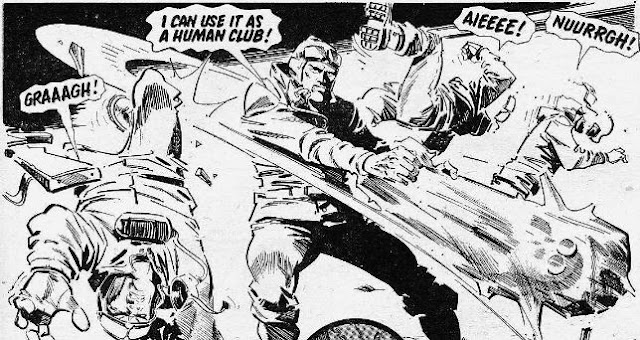 Next comes Mach 1 which is never less than gleeful in its dedication to macho action, but has also been a source of some of the most problematic and xenophobic writing in the comic book. This installment is an egregious example, where the South East Asian enemies of Queen and country are drawn as racist caricatures. There are good ideas, such as Mach using a frozen climber as a club, but the whole thing is too distasteful to really enjoy. 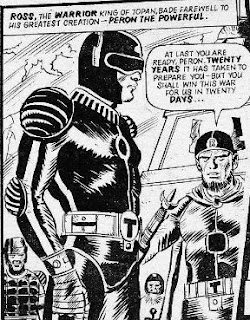 There is a short story next about one planet committing genocide on another, to round out this issues characteristically bloodthirsty range of strips. It actually has a pretty clever twist ending, and is sparse and snappy in its writing, so it’s hard to complain. All in all a classic early issue of this revered British comic book.