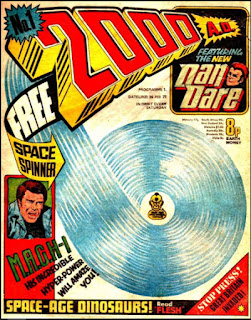 In this post I want to talk about the very first issue of a comic book called 2000 AD. I have read a lot of issues of 2000 AD over the years, but this one is new to me. I did not buy or read this historic first issue when it came out, on the 26 Feb 1977. It was a couple of years later before I started reading 2000 AD regularly, via the gateway drug of Starlord. 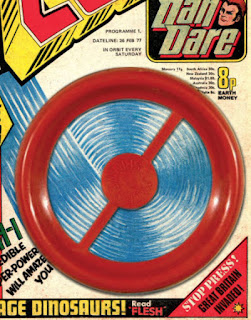 This was the launch of a new comic, intended to capitalize on Star Wars and the public's newfound hunger for all things sci-fi, and a new comic launch was traditionally accompanied by a free gift. The space spinner, just a small plastic frisbee, meant there isn't much of a front cover to speak of. Instead we just have the huge space where the space spinner was attached. 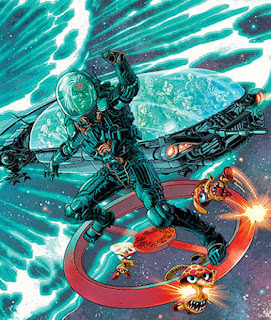 A comic and a plastic toy all for eight pence, that's pretty good. And there are still fond memories of the space spinner, as can be seen from this wonderful painting, where the alien editor of the comic book is riding a space spinner into the depths of the galaxy. After opening the comic book up, the first page is a big advertisement for what is to be found inside, and it is very, very interesting. The page says to the reader in 1977 that the far off date of 2000 AD represents a future that they will be living in. 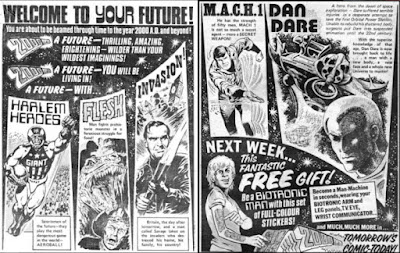 The stories on this splash page are almost all exercises in some pretty grounded futurology. This is not the space fantasy of Star Wars. For example, the splash page promises a story about a future version of basketball played using jet packs. There is also a story about the UK being invaded by Russia, although they call the invaders Volgans rather than Russians. Both these stories are very believable futures, at least from the point of view of 1977, which gives the impression of a grounded comic book making considered predictions about a possible near-future world.


Then comes a slightly more speculative idea with MACH 1, very obviously inspired by the Six Million Dollar Man, and added to the mix is a classic strip called Dan Dare, about a future test pilot. Again not stories entirely out of place in a serious sci-fi comic book looking at a future that is just over the horizon. The only story that seriously deviates from this pattern is the fifth story advertised on the splash page, Flesh. Flesh is a bonkers story about future cowboys going back in time to harvest dinosaur meat. It totally blows any attempt at presenting the comic as staid futurology out of the water. Even so, I had never thought of 2000 AD ever considering itself as such respectable sci-fi before, and this page, for the insight it gives into the ideas behind this first issue, is fascinating to me. 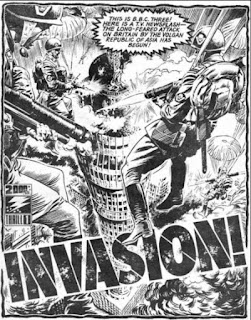 The first story of the first issue of 2000 AD is Invasion, and the first panel is Volgan paratroopers descending on London. I have always assumed that the Volgans were Russian but the comic strip keeps insisting that the invaders come from Asia. It’s a little confusing, and I guess the popularity of WW II war stories set in Japan at the time may be the reason why the Volgans are being presented as Asian. There are some interesting touches in this jingoistic old-school story. We are told that the royal family has been evacuated to safety in Canada. Hilariously the comic book thinks Charles will be king by the year 2000, and now we know he is yet to ascend the throne almost two decades after that. We also see the North Sea oil fields being taken, which shows some thought being put into the geopolitical reasons behind the invasion. 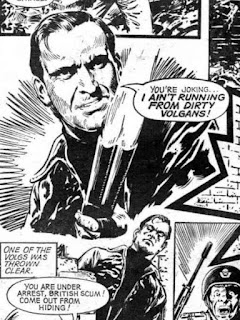 We are then introduced to the hero of the story, a lorry driver called Savage. Without any hesitation from the writers, his wife and family are immediately and gleefully fridged to give him a little motivation to fight the Volgans. He immediately goes to war against the entire invading army, on his own, armed only with shotgun and his rage. It is a brutal and macho story, and is a little out of place in a sci-fi comic book like 2000 AD, even if it is, technically, a story about an alternate future. 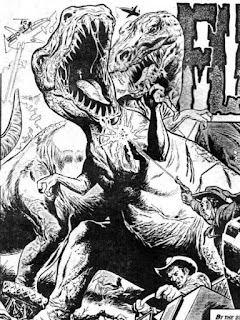 Next we have Flesh, and the first page is a beauty. It shows two tyrannosaurs fighting a bunch of cowboys in little jets and jeeps. The story tells us that in the future, humans are surviving on synthetic food alone yet they still crave meat, and so they have traveled back in time to hunt and butcher dinosaurs. This is a lot more fun than the first story. We see rangers herding thousands of head of styracosaurs as if they were cattle, and it is beautiful. 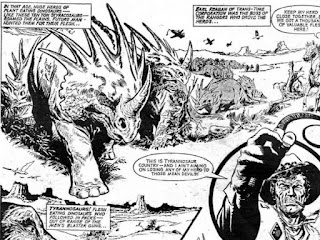 I'm starting to realize that 2000 AD has just taken the formula for a 70s boys comic book and reworked it with a sci-fi flavor. The usual comic book of the day would have a war story, a cowboy story, and a sport story. This first issue of 2000 AD is giving us just that, but each one has a future twist. Flesh is the cowboy story, except it has time travel and dinosaurs. There is a view of the futuristic slaughterhouse at the end of the cattle drive as the first installment of flesh comes to an end, and it is a messed up thing of beauty. Entire styracosaurs are fed into it through huge tubes, to be butchered and the meat beamed to the future. 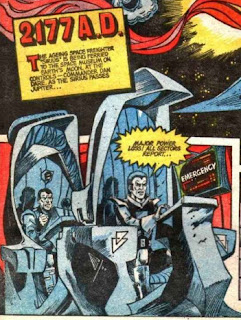 The next story is Dan Dare, and this is a slice of traditional sci-fi that starts with a space freighter in trouble, being dragged down to Jupiter's red spot. The red spot turns into a skull and the freighter is ripped apart. Dare is the only survivor and he saw something alien and evil in the red spot, but back on Earth nobody will believe him. He stows away on a transport going back to Jupiter and we'll no doubt get more action next week. 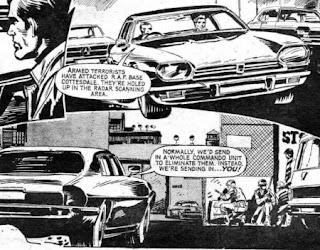 The next story is about a super agent called MACH 1, and it's actually not bad. I particularly liked the drawings of the cars, which are good enough to tell the make and model. Our hero, MACH 1, of course drives a Jaguar XJS, a luxury grand tourer, launched by the British manufacturer Jaguar in 1975. His first mission involves him kicking down some nuclear blast doors, which is a feat that takes him beyond super spy to superhero power levels. Along with the Jaguar we also get a Triumph Triton motorcycle and a Vulcan jet bomber before the end of the strip. If I had read this at the time, I'm sure I would have liked it because I was always into technology and machines, and these designs were all cutting edge in the late 70s. 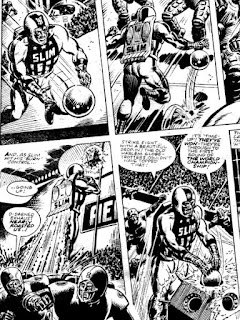 Next comes a very interesting strip called Harlem Heroes, and I assume it is influenced by the huge fame of the Harlem Globetrotters of the time. The story is stone bonkers, but it is drawn by Gibbons and has plenty of cool sci-fi in it. This one is the story about basketball with jet packs and kung fu mixed in. It ends with a bus crash, and one of the players ends up as a brain in a jar. It’s a wonderful, grisly end to a classic issue of 2000 AD.