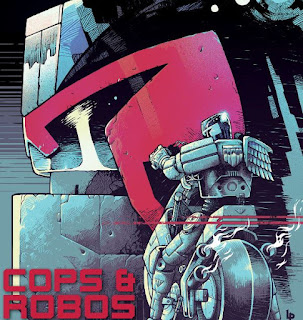 This issue has a great cover, with the robot judge looking both exaggerated, and somehow believable. It also has one of the bad puns that 2000 AD is sadly famous for, with the phrase Cops and Robos instead of Cops and Robbers. The cover art is by Luke Preece, and I was hoping he would be given the gig to do the interior art, too. But no MacNeil carries on with the drawing duties. 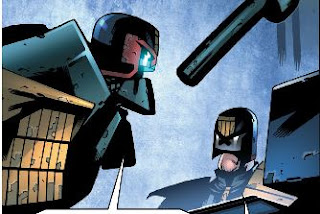 Again he draws the robot judge as a mountain of Bisley-inspired metal. It is an imposing image, but far from subtle. On the other hand, he does draw beautiful, industrial and grim architecture, and is very confident with deep, deep shadows. The story itself is slow this week, with lots of news reports speculating on city politics. There are some drawings of action, but there are no stakes to it, and no excitement.

To top things off, I find out that Wagner has given Hershey a fatal illness. What's wrong with him? What did he have to go and do that to Hershey for? I think the old guy is losing his marbles. It seems to be a fridging in waiting. But we'll see, maybe a cure will come along and save her. If not, this is hardly the blaze of glory that a long established character like Hershey should go out in. No, scratch that. Hershey should not be killed off. Full stop. Some characters should have plot armor, and Hershey is one of them.


Next comes Skip Tracer, and like the Dredd strip before it, it's mostly news reports and people standing around and talking. One of the news reports features a brutal fridging of an attractive, blonde woman, by the way. This is just one frame and then it's back to exposition. Except the writer himself seems to get bored with all the talking heads and a grenade gets lobbed. Luckily this Skip Tracer guy has Hershey's plot armor, so even though the grenade is lobbed by a "death squad" it is only a concussion grenade. Risible. The art is quite pedestrian, too.

Then comes Grey Area, with its beautiful speed-painting/manga art. The story is a little confused. A secret force of operatives starts shooting lasers at the general populace to... erm... hide their existence. Does that make sense? I'll give it a pass because it's pretty.

Then comes a Future Shocks, in black and white. Black and White art is so old-school it made me quite nostalgic. A Future Shocks, of course, lives and dies on the strength of its twist ending. This one was weak, very weak.In fact I'm not sure it counts as a twist at all. 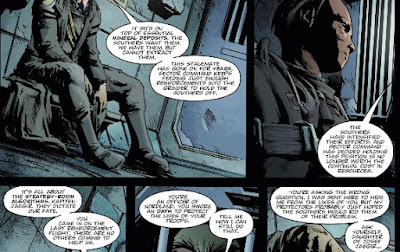 Jaegir, cones next, and I was expecting pure action and mayhem, but it too was a bunch of talking, just like the rest of this issue. Hopefully this story will pick up again next time

I was sad to see that there was no Brink in this issue. It's the story I was most looking forward to, and I hope it'll be back. This was an underwhelming issue of the comic, of the sort I have come to expect from the modern era. For now I'm still jumped back in, but a fw more issues like this one could well show me the error of that decision.