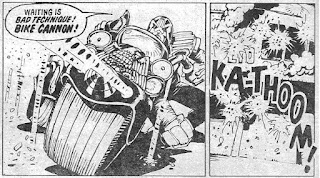 Issue 147 of 2000 AD was published 12th January, 1980. The cover features the Stainless Steel Rat, drawn by Carlos Ezquerra and it is great. It flat out states that the hero of the strip inside gets shot in the chest and head, and ends up in the mortuary. You know he has to survive, seeing as how he is the hero of the story, but you still feel a compulsion to pop the comic open and see what crazy explanation the writer has come up with to explain the hero surviving a head shot. It’s a great hook, but the art itself is something special. 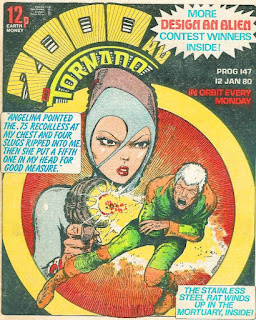 Like many Spanish artists Carlos was drawn to the then-booming UK comics market in the 1970s, a very different time in publishing, with multiple comics for boys and girls every single week, selling in their millions. He was a giant of comic book history, and one of his true talents was futuristic fashion. It was Ezquerra who visualized Judge Dredd. Again working with Wagner in Starlord, he created mutant bounty hunter Johnny Alpha, with an equally iconic look. Here on this cover we see another excellent design for futuristic clothing. Angelina diGriz is seen here wearing a very cool outfit that includes a kind of integrated hat, veil-type thing.


Before we find out how The Stainless Steel Rat survives, the first story presented is an episode of Judge Dredd. And it is drawn by the super-talented Mike McMahon. It is written by John Wagner, and features The Long Walk for the first time in 2000 AD history.

Judges are not allowed to retire. They are recruited as children and swear to uphold The Law until they die. When they reach retirement age and can no longer perform their duties out on the street they need to find something else useful to do. They can become teachers or they can leave the city to take the law to the lawless. Judges taking this option usually go out through the city walls into the Cursed Earth, an irradiated wasteland, populated by outlaws and mutants, or they to go down into the undercity. It’s like a form of ritual suicide preferred by Judges who don't want to be stuck teaching at the Academy of Law. The Long Walk isn't just for elderly judges. Some take the walk after they have blemished their records in some way and face being dismissed from Justice Department.

Every frame of this Judge Dredd story is full of frenetic line work, giving each panel a sense of energy and action. You know Dredd means business, even if he hasn’t started shooting yet. Then comes panel after panel of action, gunfire, bashed in doors, bike cannon, and more gunfire. But then the story ends on a soulful note as old judge Minty takes the long walk. It’s a truly moving scene as Judge Minty walks out into the cursed earth, to bring law unto the lawless. 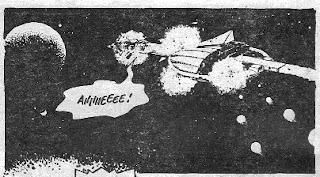 Following the Judge Dredd drawn by McMahon comes the V.C.s drawn by Cam Kennedy, making this a special issue, at least art wise. The V.C.s script by journeyman Gerry Finley-Day never seems to be as good as the art it serves as a vehicle for. 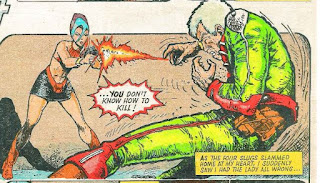 The Stainless Steel Rat is the next story presented in this issue, from an original story written by Harry Harrison, adapted by Kelvin Gosnell, with art by Carlos Ezquerra. Our hero indeed gets shot, in the heart and in the head, just as the cover promised, and it happens on the second page of this week’s story. I was half expecting it to be kept for the end as a cliff hanger. I was expecting something clever with clones or a hologram, but it turns out he was saved by something as mundane as body armor.

Next we have a strip called Ro-Jaws Robo-Tales. I don’t always like the one-shots presented in 2000 AD, but this is a very good one. Then there’s an interview with model builder Mat Irvine that is really quite interesting. The bulldozer hes working on in the photo that illustrates the article looks really good, so I decided to see if I could find the TV show it was used for, Spaceships of the Mind. 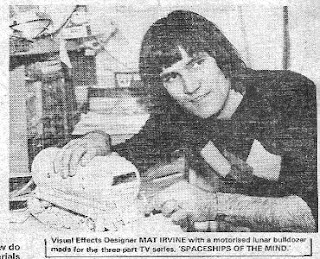 Apparently Spaceships of the Mind was a BBC series first broadcast in the summer of 1978 and hosted by pop science writer and television host Nigel Calder, one of the founding team of the influential pop science journal New Scientist. There were three episodes, each focusing on a different aspect of space colonization, exploration, and survival as the field stood at the time. Calder was able to call upon some of the biggest names in Cold War-era space science to talk about their ideas concerning prolonged human survival off-planet. Luminaries such as Gerard O’Neill, Freeman Dyson, and E.O. Wilson all contributed to the series and to Calder’s extensive write-ups in the book adaptation. The language used is all about colonization, with most of the scientists involved referring to Western conceptions of a frontier to be tamed and conquered. 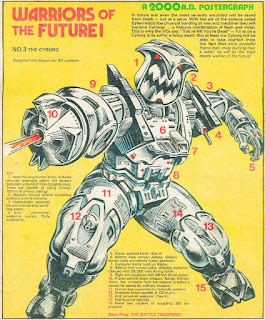 The back cover of this excellent issue is also something special. It features a poster of a cyborg warrior of the future, and it looks pretty cool. It’s a shame nobody had the idea of writing a story to feature it. Anyway, this was a great issue of 2000 AD and a thing of beauty. I write a lot about 2000 AD, it was a very formative experience for me, and I still read it today. I have a 2000 AD page where I link to all the issues I have talked about on this site, and I've written a book collecting the posts.