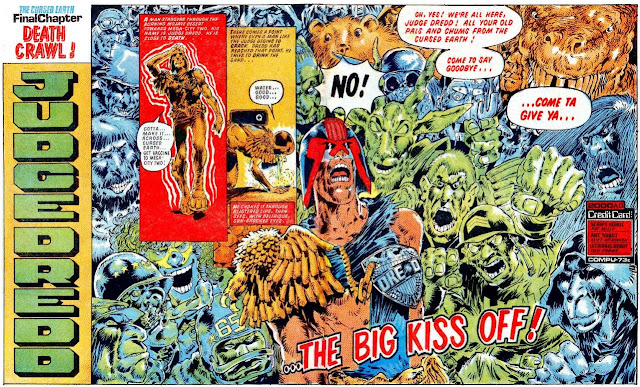 A lot of the posts on this blog are about very old back issues of a comic book called 2000 AD, and this is one of them. I have a 2000 AD page where I link to all the issues I have talked about on this site. Today’s blog post is about issue 85 of 2000AD (7th October, 1978), which is an absolute classic but also the end of an era.

The true golden age of 2000 AD started when it was joined by Starlord, but this comic book from just before that is also very good, so perhaps it could be called the last of 2000 ADs silver age. Starlord was a better seller than 2000AD during its short life across the summer of 1978, but the decision was made to fold it into 2000AD rather than the other way round because it was far more expensive to produce (more color, larger format and a higher grade of paper). The infusion of characters and ideas from Starlord (which had a more ‘serious’ sci-fi remit) into 2000 AD turned it from a good comic book into a great one. 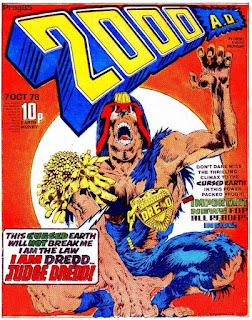 It has a cover that is an absolute classic by Mike McMahon, in fact it’s more than that. It’s an iconic image that has helped define the character featured, Judge Dredd, and lives on in the imagination of a lot of those who saw it, way back in 1978. 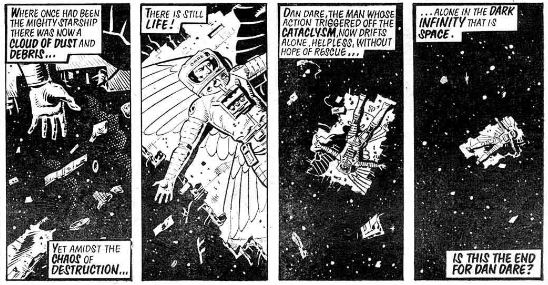 All the stories reach a conclusion of some kind or another in this issue, to make a natural jumping on point in each for the merger of 2000AD and Starlord the following week. From the next issue, Starlord heroes Ro-busters and Strontium Dog would join the regular line-up. Dan Dare, drawn with the usual impressive level of detail and rigor by Dave Gibbons, is the first strip in this issue. The story is tied up in a satisfying bow as it ends, but the way it deals with Dare and his crew is absolutely brutal. Dare’s entire crew is killed over the space of a handful of panels, then his ship is blown up and he is left floating in space. I was no fan of Dare’s macho crew of manly men and I am not sad to see them go, so I thoroughly enjoyed this episode of the strip. 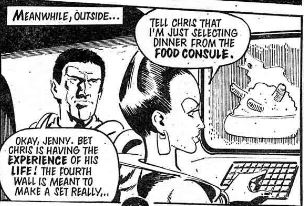 The next story is a one shot under the Tharg's Future Shocks banner called The Fourth Wall, and it’s about a holodeck-type technology. It doesn’t have much to recommend it, including the art by John Cooper, which is adequate at best. The best thing about it is a shot of a woman calling up a meal on a food replicator, and it’s a giant bowl of anachronistic bangers and mash.

Judge Dredd comes next, completing his epic quest across the Cursed Earth. It is drawn by Mike McMahon and is so loose and scratchy it is almost cartoonish. It certainly has an energy and ferocity that is perfect for this story. The Cursed Earth saga had run for 25 issues and Dredd shows every moment of it in his ragged appearance. This was the story that really put Judge Dredd on the map, but it isn’t only about the Cursed Earth. The story also winds up a subplot about an alien in a moving way. The creature is terrified that humanity will come o its planet and do what they did to their own. Dredd can only agree that history shows it has very right to be worried. Dredd leaves one epic, and next issue will step straight into another, in the Judge Cal ‘The Day the Law Died’ arc.

Ant Wars is the next strip, and it deals with being wound up by tacking on a twist ending to its rushed conclusion. It is not very sci-fi, and not hugely interesting on its own merits, a perfect candidate for culling to make way for the goodies coming over from Starlord next issue. 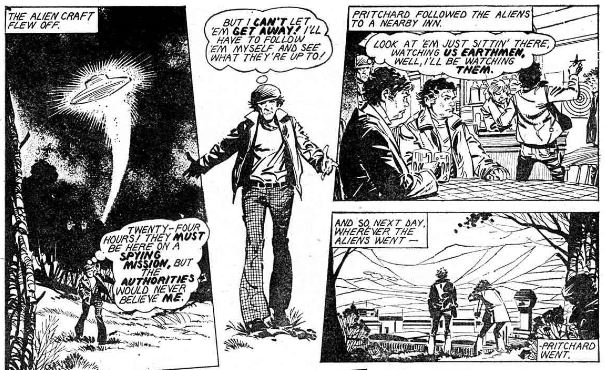 Another one shot under the Tharg's Future Shocks banner is next, with great art by Jesus Redondo. It looks much better than the other Future Shock in this issue. It is examined in almost excruciating detail by futureshockd at wordpress.com which judges this story to be lackluster. I disagree. It isn’t exciting and there is no twist ending but it does build a nice sense of menace in familiar UK surroundings, which is a lot of what British sci-fi of the time was about. Huge numbers of villages in the Home Counties were menaced by alien invasion in Doctor Who and the like.

Walter the Wobot is the last strip, and it is terrible. The art is by Brendan McCarthy, who will go on to develop a very interesting and attractive style all his own, but there is little evidence of it here. All in all this is an excellent issue of 2000 AD but it is about to become so much more with the very next issue.