Issue 204 of 2000 AD was published 21st March, 1981, and cost 15 pence Earth money. This is so long ago that the US president at the time was Ronald Reagan, a crazy racist with a background in entertainment. Imagine if we had somebody like that in charge of the USA now... oh... wait... Anyway, people were listening to Keep On Loving You by REO Speedwagon and Jealous Guy by Roxy Music. So to get that real early 80s vibe, download Keep On Loving You to listen to as you swipe through your scan of this classic issue of 2000 AD. Scans of back issues of 2000 AD can be found at BritishComics at Wordpress. I write a lot about 2000 AD, it was a very formative experience for me, and I still read it today. I have a 2000 AD page where I link to all the issues I have talked about on this site. 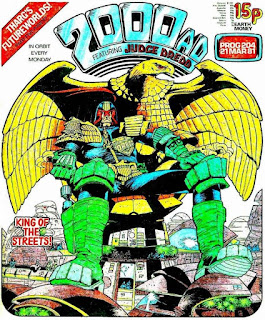 The cover of issue 204 is wonderful. It is an absolute classic, as McMahon draws Judge Dredd on a throne, sitting with his future city at his feet. Taint-the-Meat.com likes it too, describing the image as “vintage McMahon Dredd: austere, grim and, frankly, hard as nails. ... it’s richly detailed, there’s wonderful use of shadows and deep blacks, and it’s got bags of attitude — it’s just a terrific piece of work altogether.” I can only agree.


The issue starts with the Strontium Dog strip by Alan Grant, with art by Carlos Ezquerra. It is episode five of Portrait of a Mutant, which chronicles the early years of SD agent Johnny Alpha. It also turns out that Johnny Alpha is a natural with a gun, as if that was ever in any doubt. The story mainly deals with prejudice and intolerance against a backdrop of post-apocalyptic Britain, a land of mutants and normals. Mutants are hated by wider society, but they have a comradery among themselves. There is a scene where two of the mutants are comparing mutations. And one says: We can't all be as mutieful as you. It's an interesting line. The future Britain these characters inhabit is an irradiated wilderness with pockets of civilization, so political fortunes can turn on whether a food convoy gets through or not. It's good storytelling, and great art. Simple food trucks and heavily armed transports are turned into amazing images by Ezquerra. 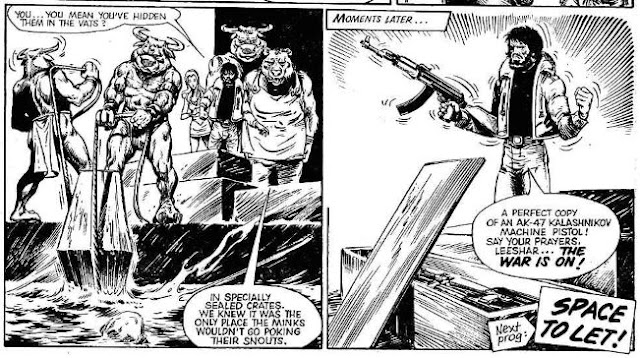 Meltdown Man by Alan Hebden, with art by Massimo Belardinelli, is next, and I can't be bothered to read it. It looks like the usual talking animals shenanigans, but this week a consignment of AK-47s turns up. Strange, but I'm not intrigued enough to actually read the strip and work out what is going on. Apparently, though I would never have guessed it, this strip is based on The Planet of the Apes.

The next story is Return to Armageddon by Malcolm Shaw, with art by the sublime Jesus Redondo, and it is much more engaging. In just a few episodes, Return has created a very dense backstory for itself, bonkers, but dense.

Next comes a Tharg's Future Shock by Kelvin Gosnell, with art by Mike Dorey. I'm no fan of these stories, as they usually depend on a twist ending that isn't so twisty. This week the twist is that a planetary survey operative turns his robot assistant into a barbecue because it was annoying. It's a stupid story, and once again confirms my distaste for these one shots.

Next comes Judge Dredd, and it is drawn an artist called Emberton. I could have sworn it was Gibson, but that’s okay because I like Gibson's take on Judge Dredd. Unfortunately the story is a crazy one that is almost as bad as the Future Shock that precedes it. It is about a diminutive alien who has his own unique ideas on dispensing justice. 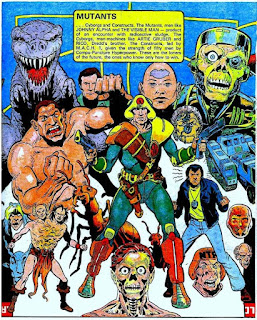 The issue also includes part of Tharg's Futureworlds Poster for readers to cut out and collect. It is a page of mutants, including Johnny Alpha, the Visible Man and Rico, Judge Dredd’s brother. There is also some nostalgia on a back cover that features a 1980’s anti-smoking advert starring Superman and Nick O’Teen. 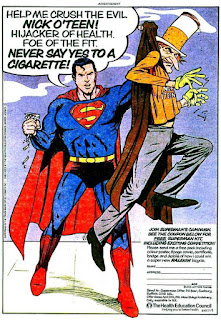