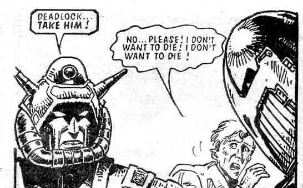 I have been revisiting comic books from my childhood for quite some time now, specifically back issues of 2000 AD, and the hit of nostalgia when I download a file of scans from a great vintage UK comic book site out there on the Interwebs and open it up is always very pleasant. You can almost smell the crappy newsprint of the original comic book and feel the smear of cheap ink on your fingers, even though these are obviously just a bunch of jpegs. I write a lot about 2000 AD because reading it was a very formative experience for me, and I still read it today. I have a 2000 AD page where I link to all the issues I have talked about on this site. 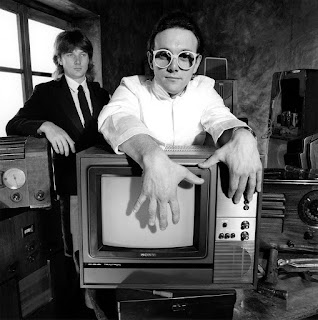 This particular comic book, the one I’m revisiting today, was published 13 Oct 1979, when Video Killed the Radio Star by the Buggles was topping the charts in the UK, so I suggest that you put the song on while you read the comic for that authentic late 1979 feel, I know that’s what I’m going to do.


According to Wikipedia: Video Killed the Radio Star was written by The Buggles above a monumental stonemason's in Wimbledon Park, London and, in a 2018 interview, Horn (bassist and singer/songwriter with The Buggles) it was based on reading JG Ballard, listening to Kraftwerk’s The Man-Machine and being interested in the new medium of music video. 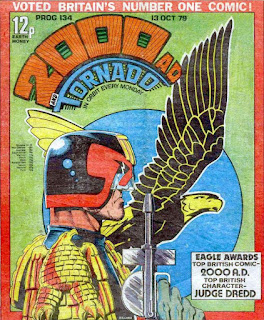 So, to the comic, and it has a cover by Bolland, a very simple image featuring a single character, the kind of image where Bolland should excel. Bolland is impressive when he puts a lot of work into the meticulous shading of an otherwise simple image, such as a single character in profile, but here his work looks rushed. I guess 2000 AD must have won the Eagle Award that is being commemorated here and this cover celebrating their success had to be done in a hurry. It is not a classic cover, but it does look imposing and it does feature the comic’s star character, Judge Dredd, so a very fitting 2000 AD cover, all in all.

The fact that Dredd is the star also means that his strip is the first one presented in almost every issue, and this one is no different, so we start with Dredd. The first image in the story, this issue, is a very old-school looking note made by cutting words from a magazine. It is always amusing to see images of the future that were created in the 190s that get so many things so right, but often have a few things like this note that are completely old-school and out of place.

The story itself is all setup, where we are introduced to a criminal calling himself the invisible man who cannot be seen or caught, it’s an intriguing idea and it will be interesting to see how they explain the villain’s ability next time.

Black Hawk is the next story, and it is not great. It came to 2000 AD from the short-lived comic book called Tornado that was shut down and combined with 2000 AD due to lack of sales. Black Hawk was a historic strip in Tornado and as only retooled as science fiction when it was moved to 2000 AD. The bastardized story that has resulted is just too generic and muddled to really shine. 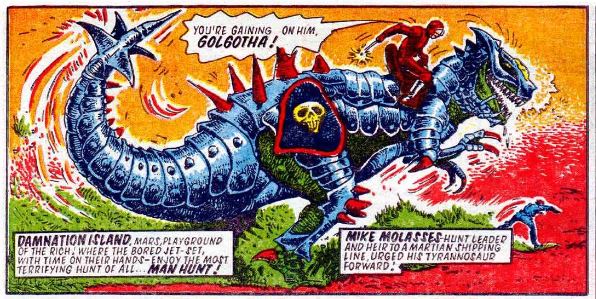 Next comes the most interesting story in this issue of the comic. It is a kind of cross over based on the frankly bizarre notion of trying to tie together the dinosaurs of the Flesh strip and the robots of the ABC Warriors. Don’t get me wrong, it’s an awesome idea, in theory, I only wish it had a better story and was drawn by either O’Neil or McMahon, rather than Ezquerra. 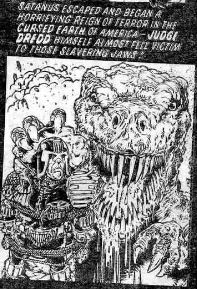 The story starts with a swift prologue that recaps the history of all the tyrannosaurs so far to have appeared in 2000 AD. It includes a classic scene from issues past with some very nice dinosaur art by Mike McMahon, a reprint of a beautiful image of Dredd being menaced by a tyrannosaur called Satanus. Then we go to Mars to join the robot heroes of the ABC Warriors strip, and see them encounter a new tyranosaur. 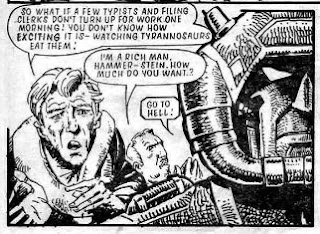 This tyrannosaur is called Golgotha and it wears a suit of armor. I’m smiling as I write that. It’s also nice to see Hammerstein drawn by Ezquerra. The way he draws the helmet shading his eyes is very nice. He also draws an excellent Black Blood. He’s slimmed down, compared to the fat old man version that McMahon draws, and it makes him look all the more sinister. The story itself is ridiculous, though, so despite the awesome concept and top-notch art, it is still a miss. 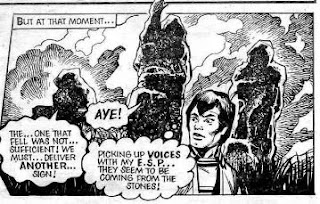 There isn’t much else in this issue. Just The Mind of Wolfie Smith, another strip that is a hold over from the defunct Tornado stable, and Disaster 1990, both of which are pretty bad. The Mind of Wolfie Smith this issue is like a bad installment from the Hammer Horror movie studio, with costumes that even look cheap when drawn in a comic book. There is no excuse for that. There should be no budgetary constraints in a comic book.

Disaster 1990 is a post-apocalyptic story that makes about as much sense as your average episode of The Walking Dead. It is just a strange fight between macho men in the ruins of rural England. 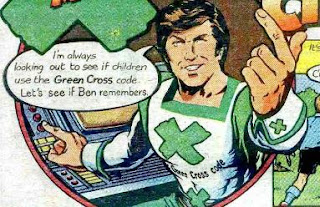 On the back of the comic is a nice hit of nostalgia with a comic book version of an old road-safety advert from the 1970s. British actor David Prowse, who wore the Darth Vader suit in Star Wars, played a character called The Green Cross Man in the adverts, which were broadcast on British television from 1975 to 1990. Prowse says the 14 years he spent as the face of this road safety campaign is the best job he’s ever had, including his Star Wars role.