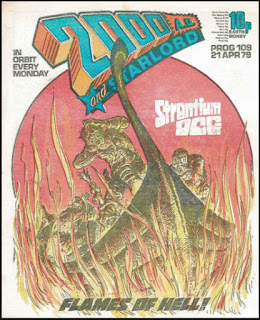 I write a lot about 2000 AD - I have a 2000 AD page where I link to all the issues I have talked about. 2000 AD is a weekly British science-fiction comic book that serializes stories in each issue. 2000 AD is a fixture of British sci-fi culture, producing artists and writers such as Alan Moore, Neil Gaiman, Grant Morrison, Brian Bolland, and Mike McMahon. In this post I will be looking at issue 109 of this fine publication, which was originally published way back in 1979. It was sold for 10p, which in today’s money is equivalent to 55p, according to Kate Morley. Even for then that was a low, low price, which is why the comic book was printed in four colors on crappy, pulpy paper. 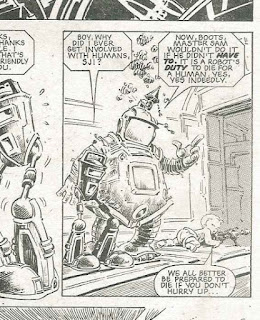 The first story in the comic book this issue is a not-great strip called Robo-Hunter. The strip is a strange concoction of unfunny jokes mixed with unconvincing action told with the help of robots. In the picture above we see the hero Sam Slade’s sidekicks, which include an ashtray robot, a steam powered robot, and a baby with a sniper rifle. I think you can tell a lot about how nonsensical this story is from that one panel. 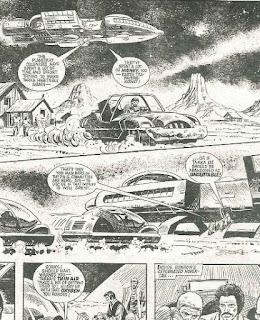 The next strip is a self-contained story with a twist ending. These have always been quite common in 2000 AD, presented under the Tharg’s Future-Shocks banner, but they have never been my cup of tea. This one is a case in point. It’s about accountants coming to a colony world to check that Earth tax dollars are being spent wisely. The story is seven pages long and the obligatory twist isn’t hugely twisty. The art is pleasant enough, but this is not a high point of the issue. 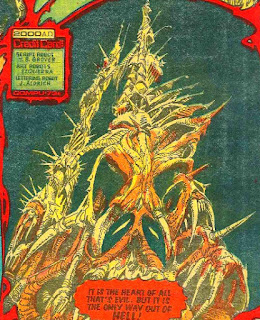 The next strip, Strontium Dog, on the other hand, is a very nice slice of comic-book action. The editors seem to know this, because they have given the strip pride of place in the center of the comic, which means its first two pages are printed in color. Ezquerra also goes to town, drawing an organic and creepy-looking version of Hell. There is a tower made of giant skulls at the center of Hell, and Ezquerra’s design for it is particularly nice. The story ends with a brutal cliffhanger, as the boat Johnny and his team are crossing a river of fire in burns away and dumps them in the flames. We have already seen a character resurrected last week, because this is Hell so torment is eternal here and there is no death, so we can safely assume they somehow survive, but it is still an extreme piece of storytelling, but not untypical for bloodthirsty 1970s comic books. 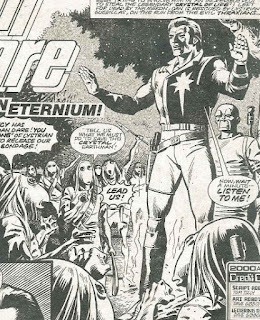 The next story is Dan Dare, which is absolutely beautifully drawn. Unfortunately, the story is little more rudimentary. Dan is rescued by a tribe of alien swamp creatures, and they immediately decide he is the chosen one from their legends. This is yet another manifestation of the white savior trope. This is such a mighty trope, it even has a Wikipedia page. Wikipedia says: The white savior is a cinematic trope portraying a white character rescuing people of color from their plight. In the praxis of cinematic narrative, the white savior is usually a man who is out of place within his own society, until he assumes the burden of racial leadership to rescue non-white foreigners and minorities (racial and ethnic) from their plights. As such, white savior stories are essentially grandiose, exhibitionistic, and narcissistic fantasies of psychological compensation. 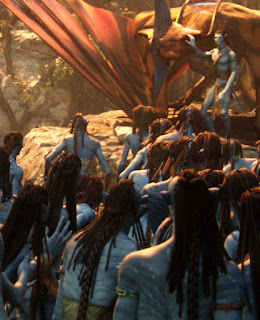 White savior stories can be a lot of fun, such as the crazy shenanigans seen in the Avatar movie. As Katherine Kingsle notes in an article for The-Artifice.com: ...in James Cameron’s Avatar, displaced white hero Jake Sully - as per the trope - becomes so skilled that he eventually exceeds the skills of life long Na’vi warriors, leads the Na’vi in battle against the invading corporation, and saves them whilst also managing to preserve their culture. In further conformance to the trope, Jake Sully is romantically involved with Neytiri, the Chief’s daughter, who only momentarily angered by his involvement in the death of her father - returns to him apologetically when he reappears, having tamed the beast feared most by the Na’vi, affirming himself as the hero we all knew he would be.

Unfortunately, such stories are toxic, even when they are well and entertainingly written. Kingsle goes on to say: At it’s the core, the white savior trope is the application of colonial ideas that idolized patriarchy, and cast people of color as hopeless and incompetent. 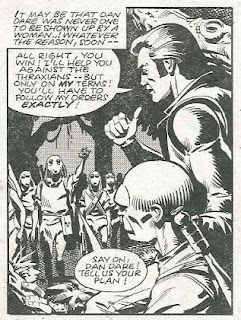 Dan Dare then doubles down on its toxic attitudes with Dare being goaded into action because he doesn’t want to be shown up by a woman. These reflections of the prevalent sexist and racist world view of 1970s Britain do rear their heads in these ancient comic books, though on the other hand, they have hardly disappeared from the comic books of today.

After all this, the strip gets down to some action, and it starts to improve. The princess (of course there is a princess – this is the white savior trope) turns out to be the most capable fighter of the episode, saving everyone’s skin against a gun emplacement that has Dan and the swamp people pinned down. Then there is a very effective cliffhanger where Dan leads the swamp people against an open gate, only to see a force barrier descend, blocking it, and leaving Dan and the swamp people as sitting ducks. How will our hero get out of this? 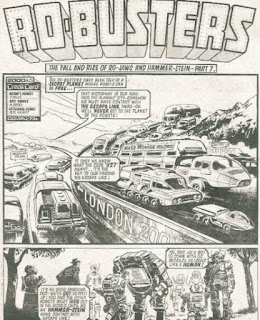 Just as I’m complaining about how reactionary a strip like Dan Dare is, we get a really progressive strip like Ro-Busters. I usually end up talking about how great the art is on Ro-Busters with works of genius created by such creative talents as Mike McMahon or Kevin O’Neil, but this week the art is by M. Dorey. It’s pretty good, but it doesn’t have the inspiration or detail of the art we usually see on this strip.

Instead we can take a moment to notice that this story is based on the idea of The Underground Railroad. The Underground Railroad was a network of secret routes and safe houses established in the United States during the early to mid-19th century, and used by African-American slaves to escape into free states and Canada with the aid of abolitionists and allies who were sympathetic to their cause. In Ro-Busters, the underground helps robots escape the brutality of their human masters in order to escape to freedom on a robot planet.

For every, subconscious, reactionary trope in this old comic, there is also a story where you see some much more progressive attitudes. I think this was what made Ro-Busters my favorite strip back then, and why I was so interested in this comic book, with its progressive ideas about what the future might bring. Among the culture being produced in the late 1970s in the UK, this really stood out, sometimes, with the things it had to say.