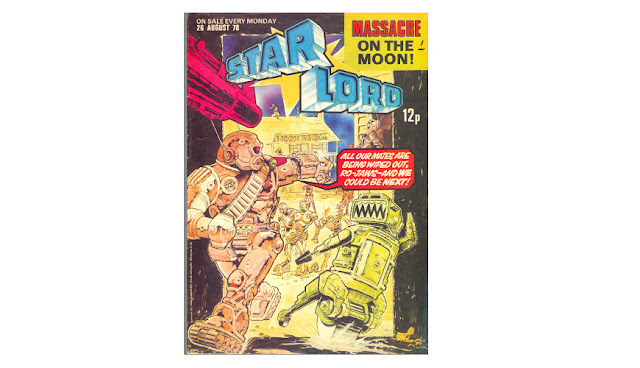 Regular visitors to this site will know that I am currently rereading an old comic book from my childhood, a comic called Starlord. It is actually a pretty frightening span of years since the first time I read this comic, as this issue of Starlord came out way back in Aug 1978, about 40 years ago. By the way, you can read this vintage comic book too because scans of the entire run of the comic are available on a website called Starlordcomic.com.

The sixteenth issue of Starlord, which came out on the 26 Aug, has a cover by one of the most talented artists ever to work in comics. Here he is drawing my two favorite comic book characters of this era. These two robots, Ro-Jaws and Hammerstein, will always have a place in my heart. It's a perfect storm of comic book nostalgia that makes this nerd's blood course through the veins just a little bit quicker.

Let's start with the artist Kevin O'Neil. O'Neill began working in comics at the age of 16 as an office boy. In 1975 he started publishing his own fanzine, Just Imagine. By 1976 he was working as a colorist on Disney comics reprints and British children's comics such as Whizzer and Chips. O'Neil then heard of a new science fiction title that was being put together and asked to be transferred. It was to be called 2000 AD. O'Neill initially provided art for pin-ups and covers, such as this one, so this is an image where we see this master finding his feet. It was not until almost a year after this cover, when he started work on Ro-Busters in 2000 AD issue 88 that O'Neill started work on his first major ongoing strip for the title. O'Neill's quirky and unusual work on Ro-Busters proved popular and helped establish him as a major 2000 AD creator. One of the things about O'Neil's art that makes it so unique is the manic attention to detail. 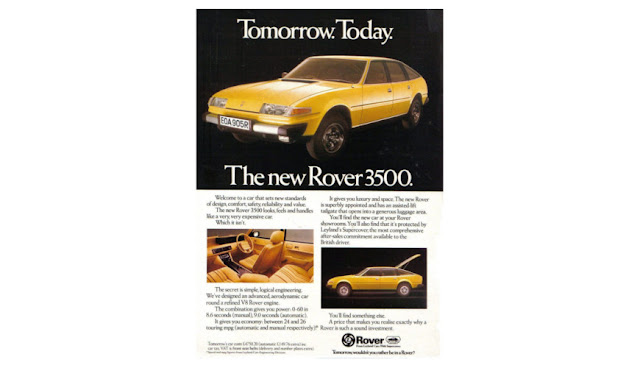 The robots are cool, and it is fascinating to see them in such extreme detail, thanks to O'Neil. We can see from a logo on his midriff that the robot on the left, Hammerstein, is built by Rover. Rover was a brand of the car company British Leyland, and it was cool in the late 70s because of a car they created called the SD1. The car was launched in June 1976, and priced at a very reasonable 4750 pounds. It's popularity was also helped by appearances in The New Avengers. Typically of 70s British products, there were complaints about terrible panel fitting and a general lack of quality control that European companies would not have tolerated in their products. The Rover logo is such a tiny detail but it is so wonderfully evocative of the 70s. In another example of the robots of the Ro-Busters future being considered like cars, we can also clearly see that he has a tax disc attached to his chest. 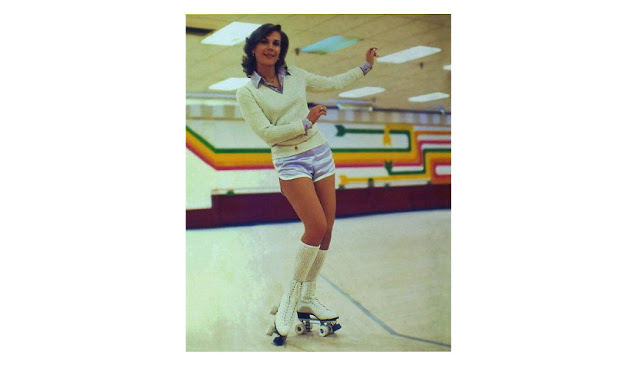 The robot on the right, Ro-Jaws, is also covered in fine detail, and even the poor droids getting blown apart in the background are detailed and interesting designs. One is even wearing roller skates, a fad that was sweeping the UK at the time, and another beautiful touch of nostalgia. Rollerskating reached the pinnacle of its popularity in the late 70s, when polyurethane wheels hit the market, Disco roller rinks were cool, and there was a roller skating scene at Venice Beach. Anyway, we have to stop gazing at the cover some time, and actually open the comic book.


As always, Mind Wars is the first story in the comic, and it is the one I have been enjoying rereading the most. It is very much inspired by Star Wars, which means it is a space opera with starship battles and mind powers, which may not be enormously original, but it is done extremely well. 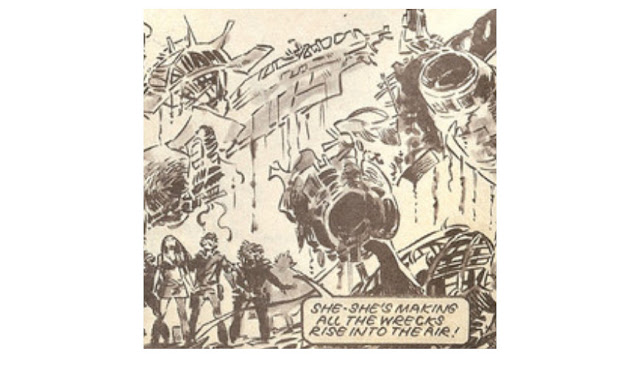 Here we have Ardeni levitating wrecked spaceship parts with her mind, years before The Empire Strikes Back did something similar. It's a relaxed little episode, where the characters get to recuperate a little between all the plot-driven story shenanigans they get up to every week. But that doesn't mean nothing happens, there are still plenty of events. The main characters build a new spaceship, meet a new character, he gets murdered, and Ardeni gets kidnapped, but in between they get to let their hair down and relax amid the beautiful visuals drawn by Jesus Redondo. You can feel the heat radiating from the page, as the men take their shirts off and Areni wears summer clothes like a tourist. 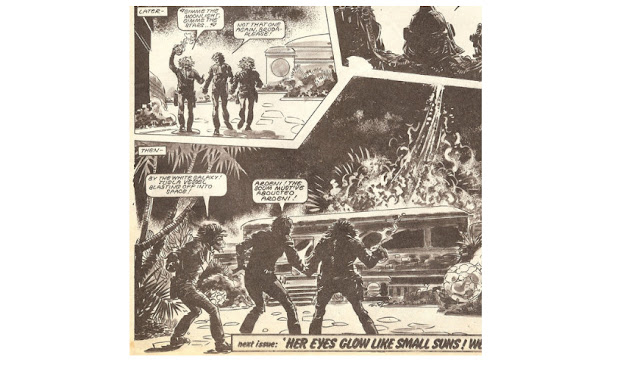 Strontium Dog is away this week, so instead we have a standalone story called Earn Big Money While You Sleep. It's set in a futuristic city, which makes me think it was actually written for Starlord's sibling publication, 2000 AD, which has a strip called Judge Dredd set in a very similar, futuristic megalopolis. 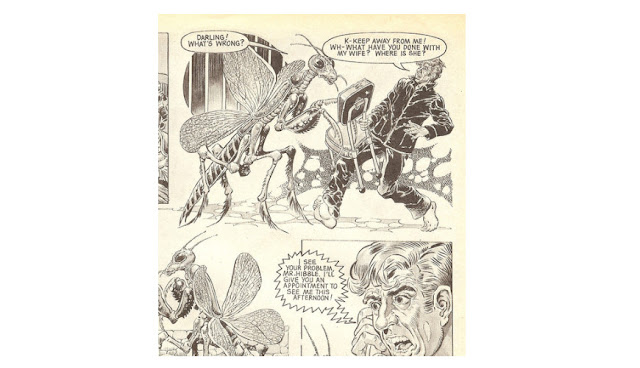 The guy in the story rents out his sleeping mind to run some calculations for an insect study, but there are side effects. It's a fun story with a surprise ending, which is also very standard for the short stories featured in 2000 AD. 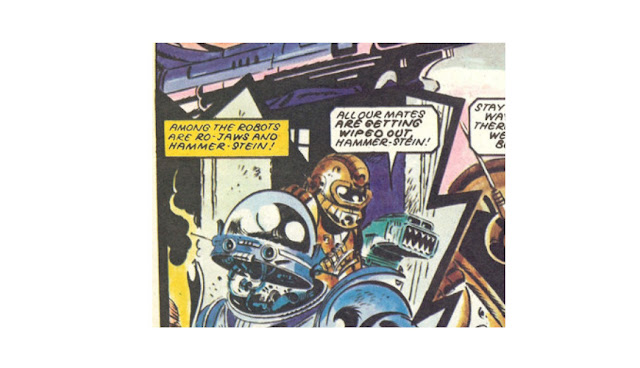 Next comes Ro-Busters, with the art done by somebody credited only as Ferrer, and it is woeful and rushed looking. Ro-Jaws in particular doubles in size from panel to panel and distorts like in a fun house mirror as Ferrer tries, and fails, to draw him. There is no detail at all and the story of this episode is all running around and exposition.

There is another story called Holocaust and it is readable, but a little muddled. It feels it has to explain everything about an extraterrestrial invasion the whole time, but shows like the X-Files and anything by J J Abrams later proved that leaving things shrouded in mystery works a lot better. I remember disliking this strip back in 1978, and it has not aged well.

There may be a few bum notes in it, and it is certainly not a classic, but this issue of Starlord is still an enjoyable read to me, for nostalgia value alone. It is also a valuable historic document for students of comic books, if only for that lovely, early O'Neil cover alone.
Labels: British Comic Book Prog Slog Starlord