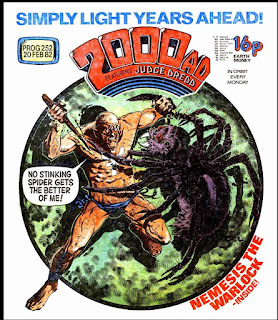 This is a  beautifully drawn cover but a weird image. It depicts a bald, middle-age man in a budgie smuggler battling a giant spider. I've said it before, and I'll say it again, given their penchant for terrible covers, it's amazing to me that 2000 AD is still in business. It has to have a readership that is loyal to the point of mania.

Ace Trucking is the first strip this issue, and I have been hugely enjoying reading it over the past few issues. It is more inventive and entertaining even than I remember, and Belardinelli's art is just perfect. This installment's gem is a panel showing the Speedo Ghost navigating a meteor swarm. Just a thing of beauty. I would blow it up and put it on my wall if I had the original art... or wall space. 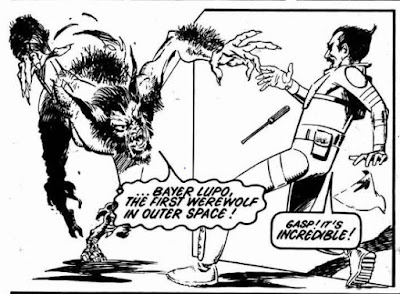 Next comes a one-off called the Hume Factor that is stupid and dull. Followed by a Tharg's Future Shock called An American Werewolf in Space. This one is quite zany, and it is nicely drawn by somebody called Paul Nearly, with a story by Alan Moore. I'm not a fan of Moore's, as I've pointed out many times, but as a light piece of fluff, this works quite well. Paul Neary, it says on Wikipedia, was born in 1958 and is best known for inking Bryan Hitch's work on The Ultimates for Marvel Comics. 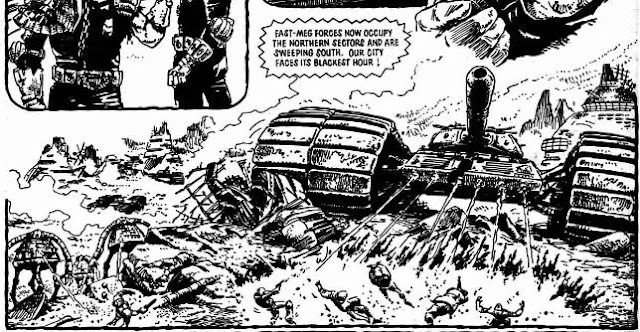 The next strip is Judge Dredd, which is still going through its long Apocalypse War arc. It can he a bit of a slog, but this is a prog slog blog post, and that is what we are here for. Ezquerra's work for this story is really sketchy and swift looking. I can't wait for this to be over and for Dredd to get back to normal.

Next we have the story from the cover, and it is good, but it has the wrong artist. Redondo is best on pulpy stories like Mind Wars, not Gothic tales like this. While reading, I can't help but imagine the panels drawn by Kevin O'Neil. The fly harvester, in particular, is crying out for his manic detail and dark sensibility. 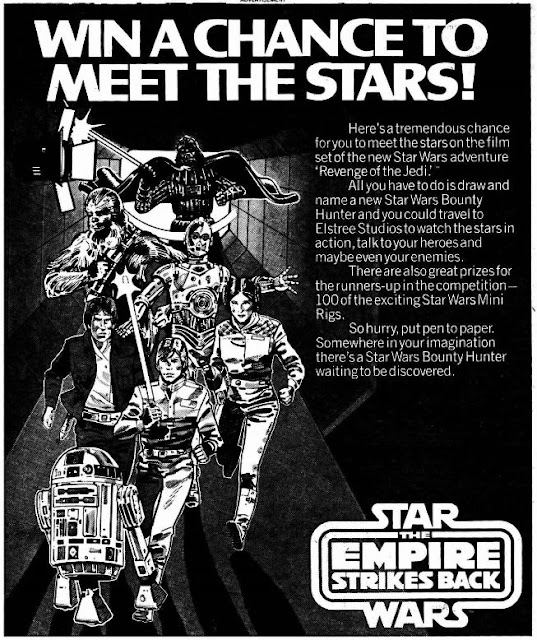 Next cones a really badly drawn ad for the upcoming movie, Star Wars: The Return of the Jedi, that was filming when this issue came out, except the ad refers to it by its abortive title, Revenge of the Jedi. 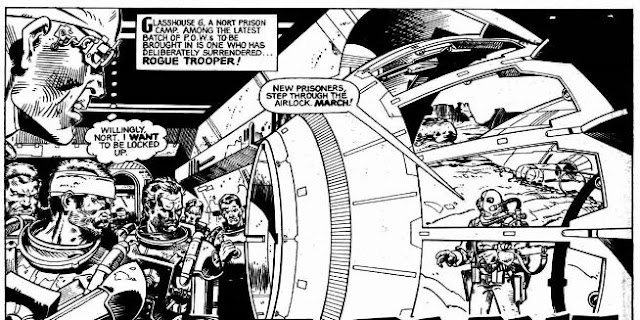 The last strip is Rogue Trooper, with that strange, detailed, art by Colin Wilson. His disciplined penwork, with lots of photographic reference is so different to the sketchy, organic style of Esquerra. I often like more expressive artists, but Wilson's work on this strip is phenomenal. The story plays to his strengths and he is obviously putting a lot of time and effort into his art here. In the episode, Rogue finds the traitor he has been hunting, but can't confront him because he first has to save hundreds of his comrade's lives. Ah, the conflicting duties of a hero bent on revenge.
Labels: 2000 AD British Comic Book Prog Slog