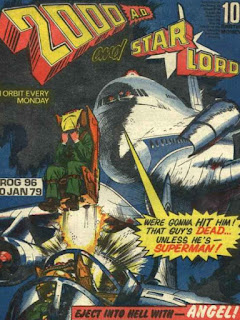 This is an ongoing series of blog posts where I am reading comic books from the far distant past, specifically early 1979, and in this post I am looking at issue 96 of 2000 AD. It came out 20 Jan 1979, and sold for the princely sum of ten pence. The cover of issue 96 isn’t very futuristic. It depicts technology that was commonplace even at the time the comic was published. There is just a harrier jump jet, a Boeing 747, and an ejector seat, but it is still a great cover. Without any robots, spaceships, or monsters, it is still perfect for the cover of a sci-fi comic book. It looks enigmatic and screams action. I like it a heck of a lot. I couldn’t spot a signature, but I’m guessing it is by Carlos Pino, an artist I have a soft spot for, after all the work he did drawing my favorite strip from 2000 AD, a strip called Ro-Busters. 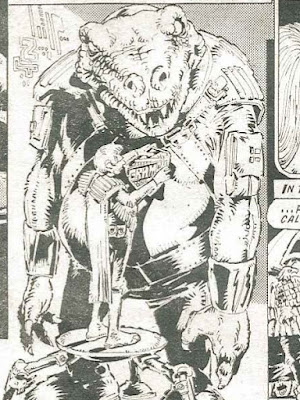 The first story in the comic book this week is Judge Dredd, and I’m pleased to see it is drawn by McMahon. Just look at the way he draws the Kleggs. The Kleggs are alien mercenaries who love battle and are paid in meat. They are a typical creation of the unsubtle and heady days of 70s sci-fi comic books. They are basically just bipedal alligators in space suits, but McMahon makes them more than that. He makes them truly menacing presences. The detail that McMahon suggests for the creature’s skin and the way it’s clothes hang on its alien body are beyond good. That sort of ability to capture light and shade has to be instinctive. 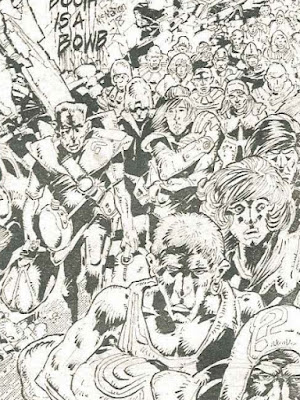 His dedication to the details of future fashion is also awesome. Even minor characters have fully realized outfits, with straps, buckles, hats, and hair styles. Often future fashion is just an afterthought in a comic book, not so McMahon. I can easily spend more time gazing at the art in the stories he works on than I do reading text boxes and speech bubbles. His work is a snapshot of life in the late 70s, his artistic talent capturing hairstyles, ideas about clothes, and even the rubble that was to be found in English cities. This rubble was the remains of townhouses and terraces demolished in those years as part of slum-clearance schemes across many neighbourhoods in the UK in the 1970s. 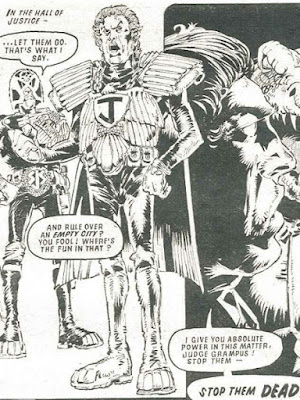 With his spindly legs and big fat belly, Cal is looking more and more like Trump. Cal, of course is a caricature of a dictator with all the nuance removed, designed to play the role in a kid’s comic book, but then again, that’s also a pretty good description of Trump. 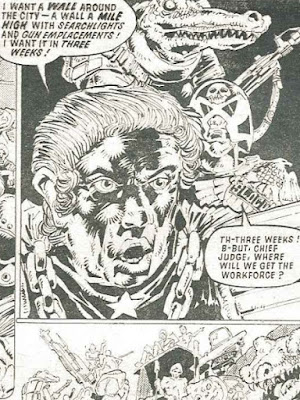 Cal even demands a ridiculous wall be built, within a stupid timescale that he doesn’t put a second’s thought into. It’s to keep his citizens in, rather than keep other people out, but it is still a spooky echo of the times we live in. Things are even worse in the future than they are now of course. After all, at least there are no alien crocodile mercenaries in our current politics.


At the end of this week’s episode they are releasing their crocodilian hounds to hunt Dredd down, and it gives McMahon another chance to display his ability to suggest detail, with all the scales of the hounds and the links of the chains holding them back suggested with bold lines and washes. 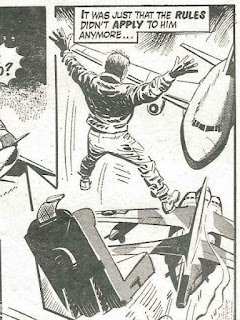 The next story is Angel, the stupid new strip that features a cut-price version of The Six Million Dollar Man]. Pino’s art is lovely, even if the story is pretty silly. I do like the gonzo storytelling behind the idea of delivering him to Air Force One via an ejector seat, though. 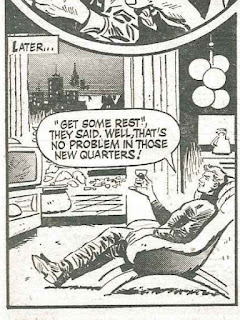 This one single panel of Angel’s penthouse, with 60s modernist furniture and something sophisticated to drink is alone worth putting up with the stupid story for.

Next comes one of Tharg’s Future Shocks, drawn by Brett Ewins. The story itself is a sci-fi standard about adventurers traveling to the edge of the universe, so the only question is – being as how this is a sci-fi short story, where a twist ending is mandatory – what exact kind of twist is waiting for them.

They don’t find an edge, and conclude the universe is infinite. One of them says he would give anything to be able to see the whole of the universe, and a text box appears saying that of course he can't, but somebody else can. Then we turn the page for the twist ending, and an alien is putting our universe under a microscope. Not the twistiest of twist endings, in fact I groaned in pain a little, but Ewins’ abstract style is a good fit for this pretty inconsequential story. 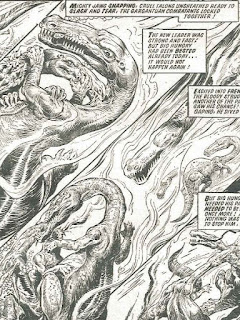 The next story is Flesh, drawn as ever by Belardinelli, who is having fun with all the grisly deaths visited on human time travelers by the dinosaur stars of the strip. 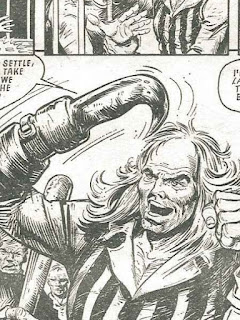 The central character of Flesh is quite interesting. He is no hero, and is written so that he has no redeeming features whatsoever. He is balding, but still wears his hair long, and all he cares about is money. He causes death and mayhem to those around him as he goes after it, and this doesn’t bother him one bit. He wears a stripey vest, like a rock star, and can be a sniveling quisling if it helps him get closer to his goals, and he is infinitely more interesting than Peters, the square jawed dope who is trying to stop him. Despite all his flaws he is charismatic, and the people employed on the time rig – worked to death, whipped and exploited – follow him in mutiny at the drop of a hat. 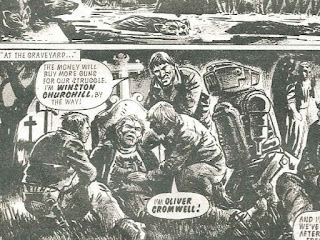 Next is Ro-Busters and the hero of this week’s story, Ro-Jaws, is in deep with the robot resistance, specifically a bunch of androids. One gets wounded and they take him to a graveyard, which sets up a very powerful comic book panel. 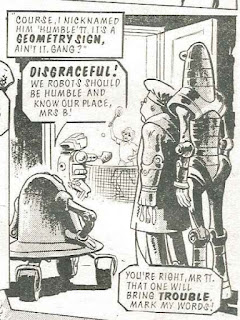 Ro-Jaws helps them and tries to officially join, but they turn him down. He then gets a job at the very same graveyard. It’s while he is working there that he meets a young girl mourning the death of her real father. She laughs at his language and his antics, and the girl’s parents buy the robot, as a gift to cheer her up. The other robot servants don’t take to Ro-Jaws. That is bound to be trouble, but we’ll have to wait till next week to exactly what kind of trouble.

This was a great issue, and I’m looking forward to reading more 2000 AD in issue 97, next week, or maybe even before.