The cover of issue 26 of 2000 AD is such a bad misfire it looks like a parody of sci-fi. As so often, I'm writing about 2000 AD, the reading of which was a very formative experience for me, and I still read it today. I have a 2000 AD page where I link to all the issues I have talked about on this site. What we have on the cover of this issue here is a group of green samurai-inspired aliens riding on the back of huge, chubby, genetic monstrosities that are a mix of lemur and teddy bear. I imagine we are supposed to feel awe and terror as these guys race toward us, but... No. 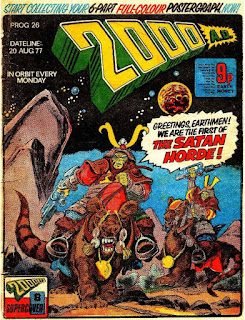 Luckily the cover relates to a single page within the comic book where there is a short story of a couple of hundred words rather than to an actual strip. You would hope that if the comic book was going to feature a strip starring these guys, they would invest a little more time getting their look right, but... No. 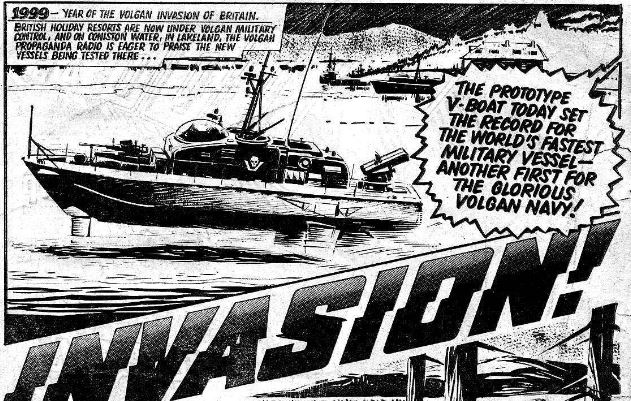 The first strip in this issue, as with almost every other issue so far in 2000 AD's history, is Invasion. And Invasion, unlike the art on the cover, looks good. The very first frame is a superb drawing of a hydrofoil speeding into action, and action is what Invasion is all about. Invasion is about an invasion of the UK by a militaristic Eastern power that is a hybrid of Soviet Russia and Nazi Germany, and about the resistance fighters who are spearheading an insurgency against them. The year for this invasion is 1999, which was over 20 years in the future, from the perspective of the writers in 1977, and a very plausible scenario. This week the story sees the Volgans testing new fast attack hydrofoils on a British lake.

The art is by Pino, one of the early 2000 AD artists that I really like. His art has one foot in the past, with a very curved, streamlined, shiny look to the vehicles he designs, for example, but his skilled atmospheric style adds so much to stories that benefit from that backward-looking aesthetic, and Invasion is never better than when being drawn by Pino. 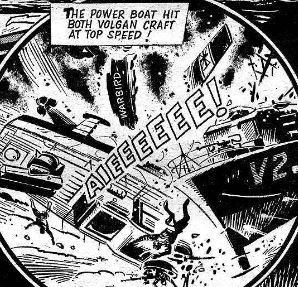 Improbably the two insurgents, Bill Savage and Peter Silk, find a boat used to break the world speed record on water. It's a fictional design called Warbird, and it looks very convincing for a boat used in an 80s speed record attempt. The guy who piloted the boat in that attempt is now an old man with a broken back, and a broken spirit, but by the end of the strip he gives his life by ramming the Volgan hydrofoils in his record attempt boat, managing to take them out in one attack. The physics of that don't make any sense but it is a surprisingly effective moment. From the first second we are introduced to the fast boat and its broken old pilot we know it is he who will save the day, and we know how - Invasion is just too powerfully driven by tropes for there to be any other outcome - but still, probably thanks to Pino's art making the impossible look at least half way believable, the moment still hits.

After Invasion, a war story, comes Harlem Heroes, a sport story. They may have both been transposed into the future but war and sport stories were the bread and butter of boy's comics in the 1970s. One problem with putting sport stories in a future setting is that the writers very rarely give much thought to the rules of the game. They change and ignore the rules whenever the fancy takes, just to help tell their story. This episode, for example, sees the Harlem Heroes go up against adversaries armed with shields. At one point a Harlem Heroes player gets slammed in the head by two shields at once. It is more like wrestling than a real sport in the way the rules are so elastic, but maybe that is a fair representation of future sport after all. 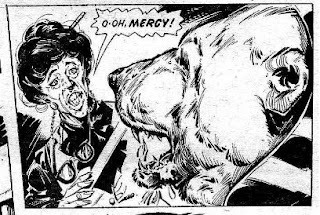 I smile as I get to the next story, Shako, for it is based on such a gonzo, bat shit premise that it can't fail to please. Even today, comics still have war stories and sport stories in them but the genre that Shako inhabits, of a kill crazy animal terrorizing a community, did not long survive the movie, Jaws, that inspired it. This is a real gem and has to he savored, because the world will likely never see anything as bananas and brutal again. Having said that, the recent series The Terror did capture something of the Shako atmosphere, but as horror rather than action, which is how it is played here.
One again, this story does not disappoint. The killer polar bear - the hero of the story - befriends a young boy. The boy hides him in school, in a book cupboard, under the American flag, and it is from here that Shako emerges to tear out the throat of the boy's teacher.

This story has two female characters and some diversity and they are all written as human beings. They are a little - okay a lot - tropey, but human. The only white guy in this episode is a mad CIA agent who has had his arm torn off and, Ahab-like, is hunting the bear. It really is a great story and worth downloading the comic for all on its own. I only wish they had given Shako the cover rather than the risible alien horde, of two, that did get the cover spot. 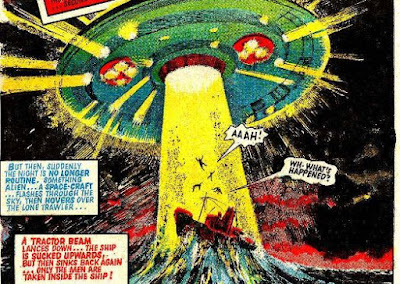 Next comes a Future Shock, a self contained short story, and it is surprisingly decent. The art is atmospheric and it has a nice angle on a Cthonian story of human impotence in the face of alien terror. Here the human victims are not like cattle to the aliens or prey to be hunted, as is so often the case in such stories, but more like fish to be harvested. The aliens even throw a small one, a boy, back. Also, because fish is brain food, it is the human cerebellum that they feast on. I rarely enjoy Future Shocks but this one really hit the spot for me.

Next comes a story called MACH 1, the code name of its hero, John Probe, and this story has been shifting wildly in tone recently. It started as similar to Invasion but as a spy story with sci-fi elements rather than a futurist war story. This week though it is doing some ancient aliens stuff, in a style influenced by Kirby. Don't get me wring, I like it, but this is not a usual MACH 1 story.
Up till now, Mach 1 has mostly featured real-world tech, except for a few prototypes and the like, so when a death trumpet is used on our hero, and it is claimed it was invented in 1964, I found myself looking it up. I mean, I know that there has been research into pain rays and sound weapons, so it didn't seem too unlikely that this had resulted from some design that was produced in the 60s. The weapons is completely made up, though, which I found disappointing. Mach 1 should stick to its real-world technology, even if our hero gets his powers from computer controlled acupuncture. One point of continuity does remain, however, and that is that Probe is his usual bloodthirsty self. Here we again see him getting 'angry in my skull' before killing adversaries. 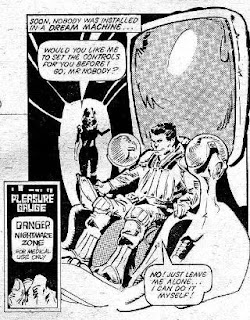 After all these comic book staples of war, spies, and sport, but with a hint of the futuristic, we get to the comic book's only real sci-fi hero Judge Dredd. This week's story is great, combining a thought-provoking concept with McMahon's amazing art. We find out that in the future, citizens of Mega-City One can use a machine to stimulate their subconscious and dream during the day as a pastime. 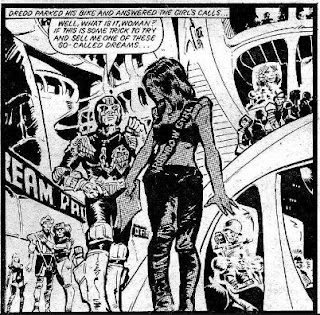 Unfortunately, in this story, a psycho is using the technology to stimulate his creative juices before causing mayhem with bombs and poison. That is a great sci-fi concept, joined with others such as the Justice Day Parade where the paramilitary, fascist force that Judge Dredd is a member of celebrates its victory over crime. When I heard that, I immediately thought of other meaningless slogans like War on Drugs. This really was a prescient strip. Unfortunately, it is less far sighted when it comes to its attitude to the patriarchy. Here it is a female character who discovers the crime and alerts Dredd, but he calls her 'woman' and disparages her help. Also her job is as a 'rainbow girl' where she wears a revealing outfit, which has echoes of a Playboy bunny girl. She has to beg Dredd to stop giving her a hard time and actually listen to what she has to say. If only they had been more forward thinking with this element of the story, less stuck in the unthinking sexism of the 1970s, this story would be an all time classic. As it is, it is a dated gem, but no more than that. 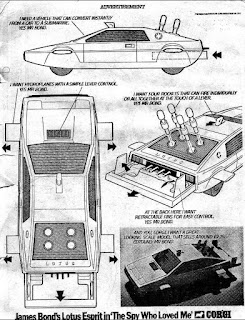 After Dredd we get a full page ad for the Corgi toy car version of James Bond's Lotus Esprit from The Spy Who Loved Me. It is still, after all this time, a very nice design. They should use it in a Fast and Furious movie. And finally, on the back page, we have a futuristic hospital that is designed to be part of the Space 1999 universe. There is even an Eagle transporter on its landing pad. It looks great, and would not have been out of place in the TV show. 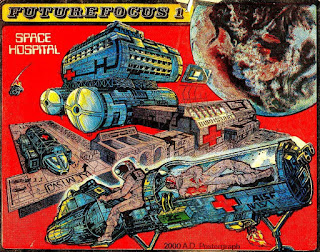 There has been so much good stuff here in this ancient comic book that it would have been an absolute classic issue... if not for the terrible cover.