Here we go again with more classic issues of a comic book called 2000 AD. Reading it was a very formative experience for me, and I still read it today. I have a 2000 AD page where I link to all the issues I have talked about on this site. For this post I'm looking at issue 29, which was published in September 1977. 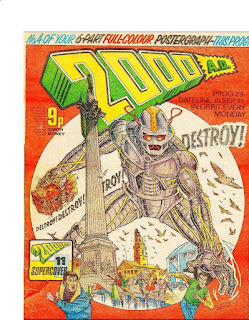 The cover of this issue is not great. Ordinarily I am a fan of giant robots, such as Mazinger or the battling behemoths of Pacific Rim, but this one is pretty generic as giant robots go. On top of that, there isn't actually a giant robot story in the comic book that this cover relates to. I hate it when 2000 AD wastes its covers on stuff that isn't actually inside, and though I would be prepared to make an exception for a giant robot but it would have to be a good giant robot, not this doodle.
Anyway, let's open this ancient comic book up.

The first story is Invasion, an alternate history story about a Nazi/Commie invasion of the UK by a power called the Volgans. This week the Volgans attempt to infiltrate the insurgent forces who are the heroes of this strip, but they are betrayed by the sound of the jackboots the evil infiltrators are wearing. The leader of the insurgency and hero of the strip, a working class thug called Bill Savage is the one to spot them. Even though they have been discovered, the infiltrators manage to start causing mayhem using flame throwers, but the insurgents are able to escape to a fire station.

An interesting battle then takes place where the insurgents use fire truck ladders to drop from the dark sky among the attacking infiltrators, and the hand to hand fighting means their flame throwers are useless. As one particularly poetic caption puts it... 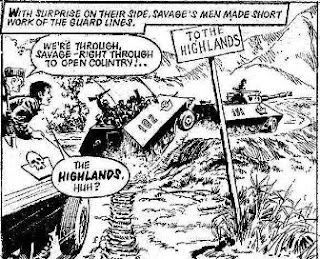 By the end of this installment the British insurgents have captured three armored vehicles and have retreated to the highlands to regroup. I must admit that, despite Invasion being violent claptrap most of the time, there are some genuinely insightful episodes. This actually reads like the story of a possible invasion of the UK, and maybe all the writers got wrong was the date. The story is set in 1999, but now in 2019 we have similar problems. The Russians are currently intent on destabilizing Europe, and it is not absolutely impossible to imagine them invading. 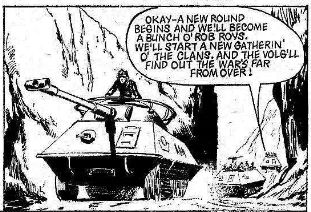 After an election where a clown like Boris Johnson has become leader of the country, helped by the Russians, it is not beyond the bounds of reason to imagine Putin succeeding in putting nationalist puppets at the head of every European government, and then invading, and the invasion reaching as far as the UK. Okay, I’ll admit, it’s unlikely, but not impossible. If that happened, the resistance could maybe come from ordinary people like Savage, and his middle-class friend, Silk. They would also be likely to find a power base in Scotland, the only part of the UK to thumb its nose at Boris, and from there launch their insurgency. Invasion might be pure malarkey, but it is capturing something believable about a UK insurrection against Russian invaders. 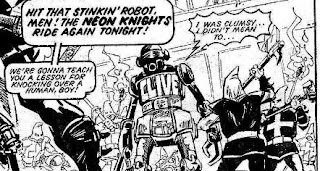 Judge Dredd is the next strip and it also has echoes of yesterday’s election. It addresses the issue billionaires, like Boris and his posh chums, use to keep the populace from getting rid of them. Racism. Boris is famously racist and is absolutely unafraid of using race to boost his popularity. In the Judge Dredd strip the racism is futuristic, but it is just as overt as anything Boris traffics in. The only difference is that in the future the racism is directed toward robots. We see hooded vigilantes killing robots and robot lovers on trumped up pretexts. This is not subtle stuff, the vigilantes are called the Neon Klan and they address at least one robot as 'boy'. Unfortunately, the artist, Gibson, undercuts the relatively interesting message of the strip somewhat by falling back on racist tropes in a drawing of one of the robots that is attacked. 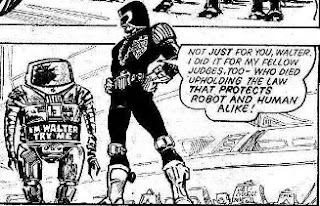 Dredd, thankfully, holds no truck with anti-robot discrimination and sets about murdering the entire nest of anti-robot racists. Killing then all proves difficult, even for Dredd, and things start to look bad for him, but then the twist comes. In the battle the Klan leader is revealed to be a cyborg with a prosthetic, robotic face, and his racist horde refuse to continue to fight for him. At the end of the story Dredd stands, legs akimbo, hands on hips, and declares that the law protects human and robot alike. This sort of anti-prejudice message just can't be repeated enough. In this election we have hate mongers like Boris and Farage peddling both overt and dog whistle racism, supremely unconcerned about the ugly forces this powerful political tactic has already unleashed. And even Corbyn, who I held my nose and voted for, has a long history of giving into antisemitism. In the face of such regressive and stupid politics, this ancient issue of 2000 AD resonates just as strongly as it did back in the super-racist days of the 1970s when it was originally published.

Politics even comes into the next story, Shako, about a bloodthirsty polar bear being hunted by the CIA because it has a prototype virus weapon in its belly. Okay, the setup is very political, but the stories are usually just entertaining Jaws-style horror, as Shako continues to up his kill tally. This week Shako does not manage to kill any humans at all, a very rare occurrence. The CIA corner him, and are about to execute him, but he is saved by the Russians. It's an interesting new direction for this strip, and I can only assume the killing will return with a vengeance in next-week's installment as the Ivan's, as the CIA refer to them here, discover that allowing Shako to live is not a good idea. 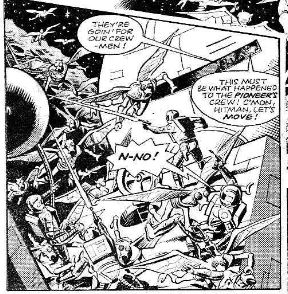 Dan Dare comes next, and it is excellent. This is pure sci-fi space opera escapism, but of a refined and beautiful kind. The art is by Gibbons and the aliens he designs here to threaten Dare and his crew are more threatening than the fanciful and imaginative aliens designed by Belardinelli, who was responsible for the art on the strip's previous run. I hope Dare manages to keep up this quality, because it is the strip that consistently has the most promise but consistently fails to deliver. This run, though, is great and I'm hoping this is just the start of a lot of space-based shenanigans to come. 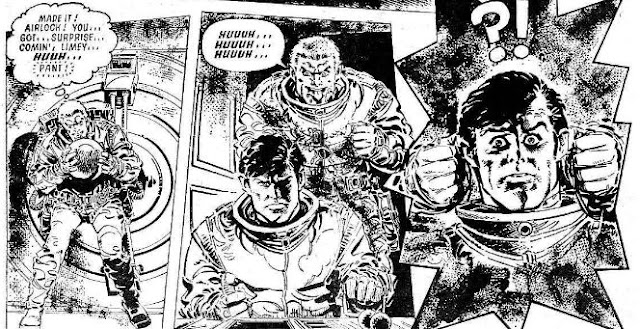 Then the Mach 1 three partner drawn by Jesus Redondo wraps up, and continues the high quality level of this great issue of 2000 AD. Again the bad guys are the 'Ruskies' and again they are helped by elements within the West. Here it is a crazed American general who is doing his best to start a nuclear war. More politics, and more echoes of today's world. Not much has changed since the 1970s in terms of the antagonism between Russia and the West, even though everything has changed.

Lastly there is a self-contained sci-fi short under the Tharg's Future Shocks banner. It is stupid, and absolutely should not work, but I have built up such good feeling about this issue, and the art on the story was so good, that the dumb reveal at the end actually worked on me. 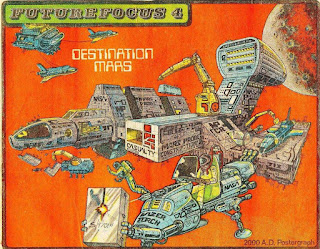 This is a great issue of 2000 AD, and with a better cover it would have been an absolute classic. I did however notice that there wasn't a single female character or, since the end of the Harlem Heroes story an issue or two ago, any people of color. In 1977, this was a comic book with its heart in the right place, but I can never recommend it as anything other than a problematic fave. It doesn't seem to even consider that its readers might be interested in anyone other than straight white men, or that they might even be someone other than straight and white. It is a huge fault with this comic book in this period, but it is still a good read and a fascinating window into the past, and how that past saw the future.