It is many, many years since I have been a regular reader of 2000 AD, but after reading roughly a metric ton of back issues, I am increasingly feeling the temptation to jump back in. This issue seems like a good point to do that, as it uses a symbol on the cover that dates way back to the early 1980s, when I was a regular reader, and that makes it feel more approachable to me. The symbol comes from a story called Rogue Trooper. It's a stylized lightning strike, the symbol of his enemies, the Norts.

The cover also says: Jaegir Returns This Prog, and I had no idea who or what Jaegir even was,  I assumed it was a different story, unrelated to Rogue Trooper, and his world, as I swiped to go from the cover to page one. It turns out I was wrong, but more of that later.


The 1980s version of me would never have guessed that I would be reading my comic books on my phone in the future, in a time after the arrival of the actual date of the comic book's title, after 2000 AD. It gave me pause, and I started to worry about what I might find in the comic book. So much time has passed since I was a regular reader. Would the stories inside the comic book be anything like I remembered. I needn't have worried.

My first shock was that even the editorial page, called Tharg's Nerve Centre, is in color. It is jarring after all the black and white 2000 ADs I've been reading, to see a color Tharg staring at me. I have never read the editorial page, though, and I don't intend to start now - plus the alien editor character, Tharg, has always annoyed me, so... moving on.

Judge Dredd is still the star of the comic after all these years, and so it makes sense that it is the first story presented. It is drawn by an artist named Colin MacNeil, who seems to have strengths and weaknesses. Like all artists.

Starting with the weaknesses, the first thing I noticed is that Dredd has dirt on his uniform. What the f...? Dredd is a showman, and the very definition of anally retentive. There is no way a speck of dust would be allowed to settle for more than a few moments, but here he has what looks like a drizzle of coffee stains all over him. And his chin has been emphasized to stupid proportions... Just.... No. And the robot judge we see, from the shadowy glimpses I caught, is something that could have been designed by Bisley in his ugly, stupid, heavy-metal pomp.

MacNeil does draw wonderfully atmospheric cityscapes though. The colors are great, too. It's nice to see Megacity One in color.

The story feels to me like something that could have been written by a Daily Mail hack. The main action revolves around a convenience store, staffed exclusively by white people - this alone seems unlikely for a present-day American city, never mind the future - but we get no insight into the undoubtedly horrific lives of the shop assistants. Instead they are gunned down by old folks for not smiling enough and being less than accommodating. This is all written by John Wagner, the co-creator, with artist Carlos Ezquerra, of the character. I can only imagine that his advanced age - he must be around 70 by now - is turning him a little reactionary. 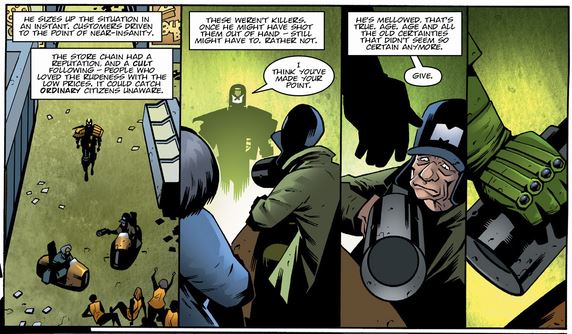 When it comes time for Dredd to deal with these perps, instead of showing off his usual paramilitary style, he goes easy on the old folks. This MAGA BS - even if the old geezer's hat only has the first M on it and is the wrong color - is the exact opposite of what a Judge Dredd strip should be about. But, if anyone is allowed to get Dredd wrong, I suppose it's Wagner.

Next comes a story called Skip Tracer, with art by Paul Marshal that looks exactly like the art in the Dredd strip. It's so similar that I wondered for a moment whether 2000 AD now has a house style. The hero seems to be a person of color, which is cool, but the story is stupid. A sniper has the hero in his sights, but kills the person he is talking to, rather than him. A stupid old trope, and pretty much the only thing that happens this episode, so yeah. The jury is out on this one, but I'm not impressed so far.

Then we have a story named Brink, which opens with a nice view of a space habitat. This is actual sci-fi, with great art by Inj Culbard, with a trendy, sparse style, and it passes the Bechdel test. Things sure have changed in 2000 AD. This is an episode that comes after some action, it seems, where the characters get together and try to work out what just happened to them. From their conversation, it sounds like a lot of cool stuff has been happening in this story. Along with a space habitat, there are also aliens, possibly Cthulhu Mythos type stuff, and the heroin has had some psychotic episodes. This one is great. I liked Brink very much, and if I do jump back in, it will be mostly because of this strip.

From the next story, it looks like Tharg's Future Shocks have been rebranded as Tharg's 3rillas. Oh dear, how unfortunate. The art is the least accomplished of this issue, by Steven Austin, and it is paced very strangely. There is a pig-faced guy with a pipe, and he swings it so slowly the characters can roll around on the ground and have long talks about archeology between each strike. The twist ending is that some guy gets his foot sawed off. I have no idea how the people in this story got to this point, but that is an odd pay-off... whatever came before.

With the next story I find out that the cover symbol does not refer to Rogue Trooper, as I had assumed, but to a story called Jaegir. It seems to share the Rogue Trooper setting, however, with the same hovering gunships - called hoppas - and war-ravaged world. I like the art, by Simon Coleby, even though I can see deficiencies in basics like perspective and anatomy. With more practice, he could become a real good artist, I feel, but he isn't quite there yet. 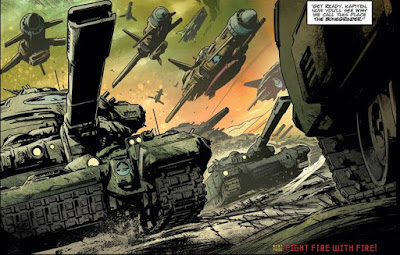 The tithe character turns out to be a sort of commissar type, bringing justice to military criminals, from what I can gather from this episode. It is all set-up but it captures the feel of Rogue Trooper nicely. I'm inclined to want to give it time to prove itself. I guess this means I've jumped back in. This issue has done enough to make me want to read the next one, issue 2118. I hate what they have done with Dredd, and not every story was engaging, for me as a new reader, but it is a solid issue, all in all.