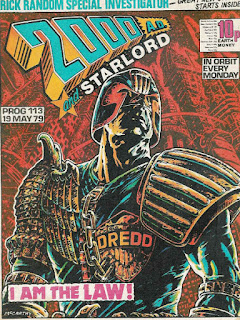 I write a lot about 2000 AD, and I have a 2000 AD page where I link to all the issues I have talked about on this site. Unfortunately, I’m wondering if I should keep on with my project of going back and once again reading issues of 2000 AD from the late 1970s and early 1980s. The problem is that there is a lot of sexism and racism in these comic books, and by writing about them, I may be validating this. They're sexist in their lack of female characters, and racist in the ethnic stereotypes that appear now and again within the pages. It’s a real worry for me, but I guess these are the comics I read when I was a kid, and I get a real strong kick of nostalgia from rereading them. I’m going to stick with 2000 AD for now, but be warned, this is not a comic book I can unreservedly recommend.


In my journey through the back issues of 2000 AD, I have reached issue 113 of the comic book. Issue 113 of 2000 AD has a very iconic cover. I remember being amazed by it, when I first saw it on the 19 May 1979. It is a very different, more painterly style than any comic book cover 2000 AD had had up to that point. I remember being aware that this was something new and different.

This brooding cover, showing a detailed but abstracted version of Judge Dredd, is painted by Brendan McCarthy. To my knowledge, this is his first contribution to 2000 AD, at the start of his career, but it would not be his last. He studied film and Fine Art Painting at Chelsea Art College in London, before deciding to become a full-time artist. He created the independent comic book Sometime Stories with art college pal Brett Ewins, who also worked for 2000 AD, and had a style that shared similarities to that of McCarthy. I imagine that Brett Ewins helped McCarthy get the gig. McCarthy started working for 2000 AD in the late 1970s but later worked as a designer on Highlander, Teenage Mutant Ninja Turtles, and Lost in Space.

More recently he was asked to co-write and design Mad Max: Fury Road with director George Miller, after meeting Miller in Hollywood and pitching the movie to him. It was McCarthy's first Hollywood screenplay, and he was the original Production Designer on the movie. As if to support my theory that Ewins got him work with 2000 AD, the artist on Judge Dredd inside the comic book this issue is Ewins. 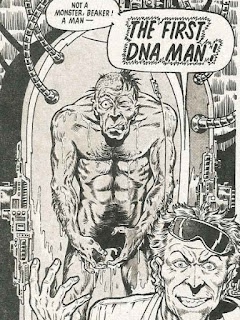 The Judge Dredd story is a horror yarn based on Frankenstein, and Brett Ewins is a perfect choice. He did his best work on stylized stories with a horror element. I have a soft spot for Ewins, even though I did not rate him as among the very best of the artists that worked on 2000 AD, and my warm feelings for his work have only increased since his death in 2015. According to Wikipedia:

He started the comic Deadline in 1988 at the same time as working on Skreemer for American comics publisher, DC. He was also still contributing art to 2000 AD at the same time, and this level of work was to have a serious impact of Ewins' health. He suffered a serious breakdown from overwork in 1991 and was unable to take on work that had a deadline. In January 2012 he sustained head injuries during a confrontation with police, in which one policeman received stab wounds. He was subsequently charged with causing Grievous bodily harm with intent. On 17 February 2015, people received the news from his niece that Brett had died in hospital from emphysema.

It is a very sad story, and a warning to anyone who throws themselves too deeply into creating comic books. 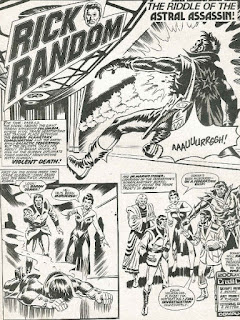 Next we have a story called Rick Random, and it’s a vintage-seeming thing, reminiscent of Buck Rogers. The art is extremely lacking in detail, and I suspect that is because the artist, R Turner, lacks the skills to include it. The story is centered around a space detective, though, so perhaps the strength of the plot will compensate for art that is more decorative than explanatory, if that makes sense. 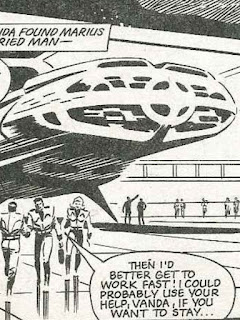 This panel may only be a very vague sketch of a spaceship, almost completely lacking in detail, but I have to admit that I do like it. I particularly like that big front window. I’m a sucker for complex windows, like the spiderweb window of the Millennium Falcon. 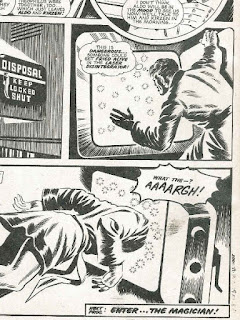 The strip ends with a murder that I remember - through the decades - to this day, because the design of the laser disintegrator this poor rube gets kicked into offends my sense of health and safety so much. Something so dangerous should be protected with more than just a big sign on the hatch that covers it. 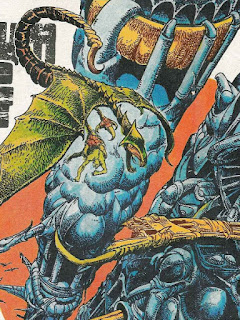 Next up, Ezquerra does his usual beautiful art for Strontium Dog, including here a kind of half pterodactyl, half scorpion bird. This episode of the story is quite trippy, as the characters move through an alternative dimension that is very similar to Hell, like the sort of thing that might be written on a drug fueled bender, but the art is great, and it is a nice break from the usual antics of Strontium Dog, which often lacks the whimsy that this story has in spades. 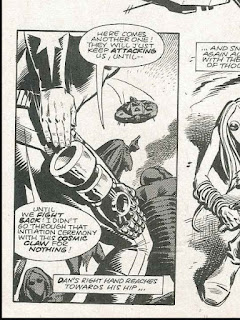 Dan Dare is next, and Dan is looking more and more like Han Solo. He is even wearing his powerful alien artifact slung low on his thigh in a holster. It is a nothingburger of an episode, but still engaging. The art, by Dave Gibbons, is beautiful and precise, and is crying out for something more interesting to depict. 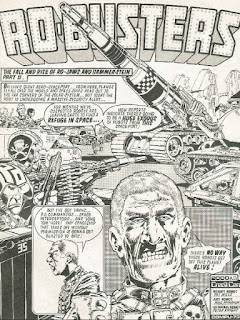 At last, after all this good stuff, we come to something very special. The next story is Ro-Busters, drawn by the genius that is Mike McMahon. As Heroesof2000AD says: McMahon is one of 2000AD’s all time art legends. Pretty much everyone raves about his work, and only has nice things to say about the man himself, too. He seemed to be interested in using his pages to draw some sneaky fine art in amongst the story. Like the best comics artists, there’s the pure pleasure of a drawing in there nearly every time. When you’re depicting futuristic robots and still make everything look grimy, broken and lived-in, it really brings home the sense of realness, for want of a better word.

This is one of the very best episodes of Ro-Busters, which is one of the best strips ever to appear in 2000 AD. McMahon is having particular fun this week drawing various paramilitary thugs with guns, the bad guys who are chasing the robot heroes of the strip. They are gargoyles in uniforms that look like they are made from bin bags. 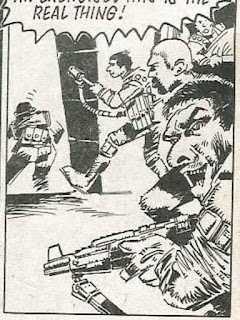 These idiots are gleeful in their cruelties, hot on the heels of the escaped robot heroes of the story. The robots are leaving for the robot planet, where they can be free, but the robot investigation police are just too close. A small team of robots will have to sacrifice themselves, stay behind, and make sure the others can get away. 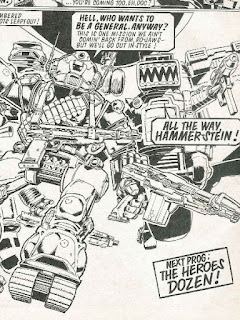 Of course the two robots leading this gang of heroes are Ro-Jaws and Hammerstein, jumping from a spaceship, and drawn by Mike McMahon. The way Ro-Jaws is holding his gun in his two-fingered pincer hand is just priceless. As I said at the start of this post, 2000 AD is problematic, and this is yet another issue that comes nowhere near passing the Bechdel Test, but at the same time it is a classic.