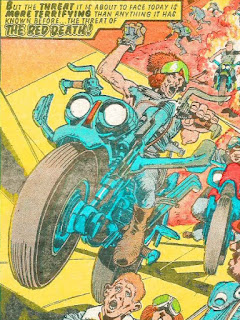 I’m reading ancient comic books from my long-ago youth. I’ve lost sight of why I’m doing this but it’s too late to stop, so here goes with another one. It’s from way back in 1979, and it’s called 2000 AD. (I have a 2000 AD page where I link to all the issues I have read so far) 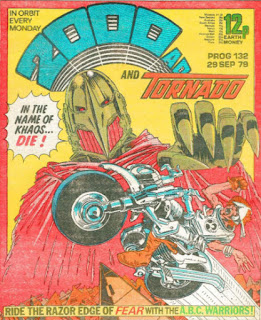 Issue 132 of 2000 AD has one of my all time favorite covers. It is by McMahon, who has a very different style to Bolland, whose work we saw on the cover of last week’s comic book. The colors are different, the composition is different, and the pen work is different. McMahon, the cover artist and all-round genius, has painted a bright, primary color yellow sky, combined with candy-apple red occultist robes, a rust orange cityscape, olive green robot, silver motorbike, and brilliant white  clad young droog thug. The droog has a ginger afro and some kind of white eye protector, high-tech headband on his head, combined with lots of punk-style straps. It’s a wild choice of colors, dissonant, expressive, and arty.

The pen work is as confident as the choice of colors. There is very little crosshatching, just bright areas of color, drawn over with lines and areas of black that are all doing something architectural and important. There is a lot of detail in the folds of clothes and the contours of technology, lovingly outlined without unnecessary scribble. Don’t get me wrong, I do like some scribble if it is done well, but here it has been omitted to produce the light and dark of a punishing sun.

The composition is fascinating to me, because the robot is drawn threatening the droog in some uncanny way, the way a demon would usually be drawn, hinting at the immense mystical power this robot commands. I loved the idea that a robot could be a magician and a master of the occult, and I still do. It’s an idea I keep coming back to in my imagination, and this robot character, he’s called Death Lock, was the first time I encountered it. I remember hardly being able to wait to open the comic and find out what this creepy robot is doing to the futuristic biker gang member. 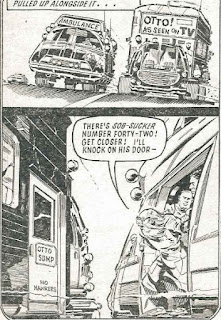 I would have to wait, though, because even as a kid I used to like to read a comic book in order, and the first story is Judge Dredd, drawn by Ron Smith, who has his faults. I don’t like how his figures are all very plump and fleshy, even the heroes, but his art works well for this strip. The writing is also excellent. I usually don’t pay too much attention to the writing in 2000 AD; I’m usually quite happy if it does no more than avoid being offensive and manages to entertain me. This means that when quality stories with inventive premises and interesting themes do turn up, they are delightful gems among the morass, and I enjoy then all the more. This Judge Dredd story is a case in point. It touches on reality TV, a housing crisis, and police using computers and surveillance to fight crime. This is all in the late 1970s when most of these were only the fever dreams of the most pessimistic futurologists. The idea that people would live in mobile homes that are continually driving is something that might actually work. It’s awful but possible. 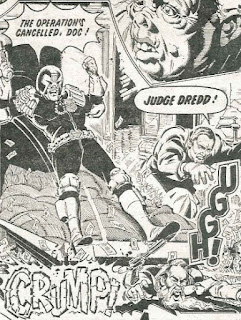 After all that praise for the writing, Judge Dredd foils the crime by hiding in a wall bed. It IS an effective moment because you really care, waiting for Dredd to turn up and save the day, and it isn’t obvious how that is going to happen, but popping out of a wall bed is kind of dumb. Then things turn violent and it’s always a guilty pleasure to see Dredd deal out some summary justice. This week he even shoots somebody at the wheel on a busy motorway, causing a crash. The whole strip is great entertainment. 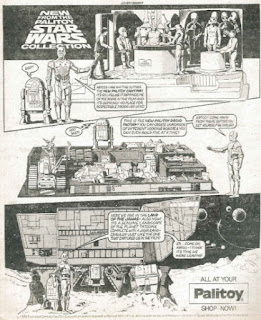 Next we have a rather beautiful advertisement, hand drawn by one of the 2000 AD artists by the look of it. It’s advertising three Palitoy sets, including the Mos Eisley Cantina, a droid factory, and the sandcrawler used by the Jawas. My favorite is the Jawa vehicle. I’m guessing Bolland or Gibbons did this, but I can’t be sure. If whoever did it managed to hide a signature in there, I couldn’t spot it. 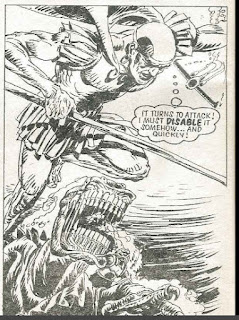 Next comes Black Hawk, but I couldn’t concentrate on it. I ended up just skipping past it in my eagerness to get to the ABC Warriors, making this one more time I haven’t bothered reading this strip. It’s about a Roman legionary kidnapped and forced to fight in a space arena like a gladiator, but it turns out not to be an exciting comic book, no matter how badass the concept sounds.

At last comes the ABC Warriors, and we see that McMahon’s color choices are just as brave here as they are on the cover. The visual design of the pages is great too. Everyone lives in pyramids in the story, because of course they do, it’s Mars. There was a Dr Who story around this time called The Pyramids of Mars which was very good considering the usual standard of Dr Who. The idea of pyramids on Mars is just baked into the culture. 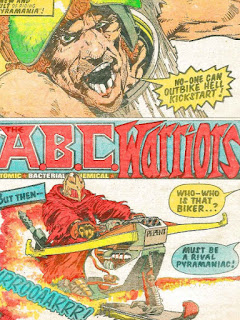 On one of the color pages in the center of the comic we see a close up of the head droog, named Hell Kickstart, and his gap-toothed maw is wonderful. Just below that we have McMahon’s interpretation of a future bike designed for an earlier story by Kevin O’Neil. It’s a badass bike with a skid for a front wheel. McMahon’s renderings of O’Neil’s designs are sublime, and that includes the strip’s main character, Hammerstein.

Just look at this hospital designed by McMahon. It is a superb futuristic space, with the guy doing the autopsy working on the dead body via a computer terminal, not touching it at all. This happens when the second half of the strip moves away from the bikers to a disease called the Red Death. It turns people into skeletons but lies dormant until triggered by fear reactions such as adrenaline and an increased heart rate. At the very end of the strip, the soldier robots decide they should go fight the virus at its source, Death Valley.

There are a couple more stories before the comic book is over, but neither of them are particularly interesting. Never mind that, though, this issue of 2000 AD is a great one based on the strength of this episode of ABC Warriors alone.