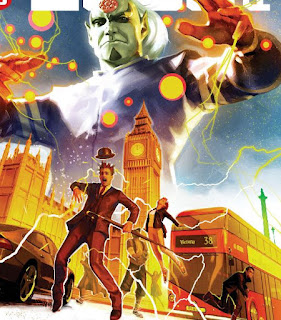 I love 2000 AD. It was a very formative experience for me, and I still read it today. I have a 2000 AD page where I link to all the issues I have talked about on this site. This issue has a beautifully painted cover. It's a really nice example, really, except for one thing: Tharg. I hate Tharg, and have hated him ever since it was decided to kill a comic book called Starlord and merge it with the (less popular!) 2000 AD. Starlord was put together by an alien named Starlord, who was always a much better editor than Tharg, and looked a lot cooler, too. He was never egotistical enough to demand to appear on a cover, while Tharg has appeared on far too many. Plus there is a guy in a bowler hat. Why? Is he Max Normal? Is it supposed to be anachronistic? Is it time travel? Nobody puts on a bowler hat anymore.

Judge Dredd is the first strip, and it starts with crowd trouble, but Judges have never had trouble dealing with crowds before. It had me wondering what happened to good old riot foam. Maybe austerity is hitting the police in the future, too. maybe they can't afford riot foam anymore? Then, at the appearance of one, single, mad bomber, the mob melts away, anticlimactically. 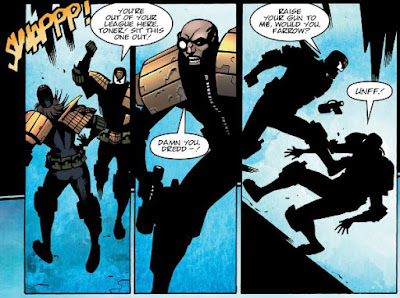 Then the coup we were promised was dealt with by Dredd in just three frames. That's two non events, after weeks of build up, so what are we left with? There is a nice twist to the story, relating to the robot judge that everyone in the city has (inexplicably) been angry about. I enjoyed it, but at the same time it is a curiously low key end to a story that held a lot of promise. I must state here for the record that I like my Dredd with a little more action.

Skip Tracer comes next, and he is also facing a bomber. He uses his "green power" (whatever that is) to attack some old guy, seemingly unconnected to the bomber. The bomb is then diffused by having a taser thrown at it. Huh?

Some more stuff then happens, but none of it made any sense to me, and then (out of nowhere) this episode has the words "The End" printed at the bottom. I can't say I'm upset about that, because I have no idea what was happening - week after week. I guess that's what you get when you jump into a story half way through.

Then comes the conclusion of the Tharg's 3riller. The story is definitely a John Wick homage mixed with a Usual Suspects twist, but a weird one. The assassin seems to be a shape shifter, if I understand it correctly, but I'm not sure I do. I'm actually intrigued to see this story carry on. I won't lie. I thought it was dull when it started, and borderline racist, but it has won me over. 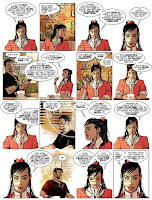 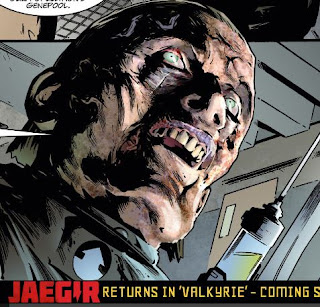 Then comes Jaegir, and there isn't so much cool military hardware trundling and flying around this week. Boo. Hiss. However, the art is, if anything, even more atmospheric. I'm sure Simon Coleby would be a great choice for a zombie strip, based on the grim freaks he draws for this episode.

All in all, this issue was a great improvement over the last couple of issues, and I enjoyed it a lot.
I see from the editorial page that Brink is coming back, too. Yay. I have to admit that I'm having fun reading 2000 AD at the moment, and I can't wait for next week.