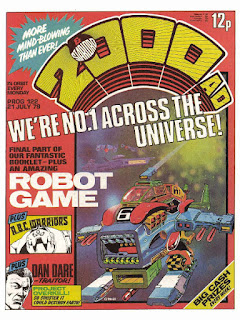 For this post, I’m reading a comic book that was published way back on July 21, 1979, which is the same day that the famous Amandla world music festival was held at Harvard Stadium in Boston. The headline performance was Bob Marley, and other performers included soul legend Patti LaBelle and jazz pianist Eddie Palmieri. So feel free to listen to Bob Marley while reading the comic book, to get that authentic 1979 feeling. I write a lot about 2000 AD, it was a very formative experience for me, and I still read it today. I have a 2000 AD page where I link to all the issues I have talked about on this site.

Issue 122 of 2000 AD has some nice spaceship art on the cover, from the talented pen of Kevin O’Neil, but that doesn’t mean this cover is good. The spaceship has to fight for attention against all the other elements of a cluttered design, and there is also a price hike from 10p to 12p. 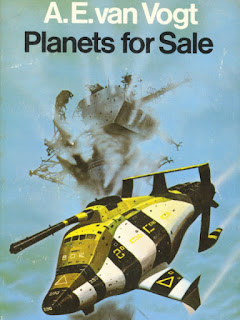 The spaceship is like a comic book version of the work of Chris Foss. Foss has become one of the most widely recognized spaceship artists. He has created over a thousand book cover artworks for authors such as Isaac Asimov, E. E. Doc Smith, Arthur C. Clarke, A. E. Van Vogt, Philip K. Dick, and many others. It is understandable that his influence on this artwork would be so obvious, even though it is still very much a work by O’Neil, with his extreme detail and extremely geometric take on technology. 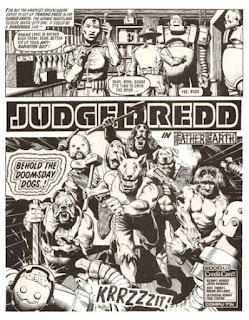 Judge Dredd is drawn this week by Bolland, who always produces beautifully shaded and pleasing images. In the intriguing story this issue, the bad guy is a man covered in vegetation. Bolland’s attention to detail is perfect for this guy, and the vines that wrap round his body. This installment is all setup, and the actual plot will start up next time. It’s a strange one, but atmospheric and interesting. 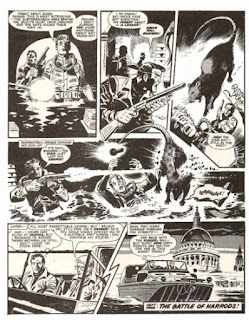 The next story is Disaster 1990! Bill Savage continues to drive round flooded London in his amphibious vehicle and, almost realistically, his biggest problems are rats and bank robbers – Just like today’s London. Next issue we will be treated to the Battle of Harrods. Disaster 1990! isn’t my favorite strip but that sounds like it could be interesting. 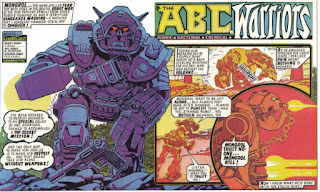 ABC Warriors is drawn by McMahon again this week, and the color choices on the two-panel spread that introduces this week’s action are excellent. Half of the spread is in the cold blue of the time before combat is joined, then after Hammerstein and Mongrol meet, the color turns to hot oranges and yellows. 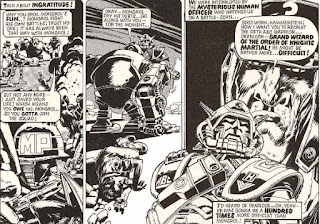 In the black and white of the later pages we get the raw physicality of these two robots. They are heavy lumps of metal, robust and dangerous. Hammerstein ends up saving Mongrol’s life and he agrees to join the squad, in a beautifully lit panel. In the foreground we see a dead human, reminding us that even though this is a robot war, there are still casualties. This is a beautifully drawn comic strip, even if the story itself is a little obvious. It even includes the I owe you my life trope. 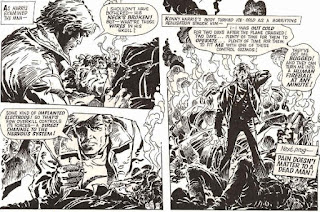 The next story is Project Overkill, and we are starting to get details about what the project with the code name Overkill actually is. It turns out that Overkill is a computer buried in the dessert. It is so advanced and intelligent that it can predict what Captain Kenny Harris, our hero, is going to do before he even does it. Our hero also finds out that the computer implants cybernetics in the skulls of its minions. Understandably, he suddenly becomes worried he has been given the same procedure. This is another intriguing story, in an issue that is shaping up to be a classic. 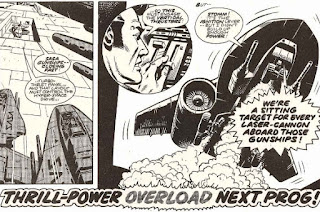 Dan Dare is the next strip, another installment that just keeps going round in circles. At least this week Dare gets a nice new spaceship. He stalls as he takes off, and it looks like he is going to be a sitting duck, creating a pleasing cliffhanger for the comic book's last story for this issue. I can’t wait for dare to blast off with his cosmic claw and his new spaceship and actually get involved in some adventures.

I would say 2000 AD has managed to justify its increase in price from 10p to 12p with a very solid issue. I, for one, will continue reading, of course I downloaded it for free, because it is a couple of decades after the futuristic date the comic book is named for, and we may not have the robots and the flooded London that 2000 AD predicted, but we do have the Internet, and scans of these classic British comic books are stored there.