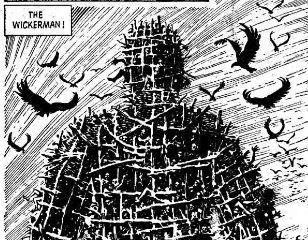 I have decided to read every issue ever printed of a comic book called 2000 AD. Don't ask me why. I'm also posting about it, for the edification and enjoyment of this blog's readers (however many of them there may be). This post is about issue 338, and it makes a good initial impression right from the cover. 2000 AD often ends up with covers that make no sense if you have never read the comic book before, and make little sense even if you have. Some particularly egregious ones have been a pop group of chickens, a baby being inflated with helium and floating like a balloon, and a guy with a giant nose. I've always wondered if they lost sales with such weirdness on the covers. 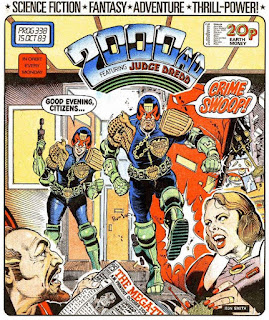 The cover this week is by Ron Smith, and it is not weird at all, at least by the standards of 2000 AD. Instead of musical animals, inflated babies, or pendulous noses, we have a future police force doing some dystopian future things, the bread and butter of sci-fi.


The Judge Dredd strip gets the cover and it is also the first one presented inside the comic, befitting Dredd's status as this comic book's star. It is funny that the action in this first story looks like it is happening in a small apartment in the 1970s rather than a future city. The 70s vibe isn't limited to the apartment's decoration because the couple being oppressed by Judge Dredd this issue are living the sexist dream, the man reading the paper while the woman is knitting (probably baby clothes). On the other hand, the cover also features Judge Hershey, a female judge who is one of the most famous and kick-ass of 2000 AD's stable of judges, along with Dredd himself. 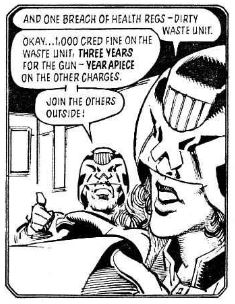 As a kid I used to hate Ron Smith's art for the flabby physicality of the people he draws and his awkward poses, but he has grown on me over the years, and I now really like some of the work he has done on Judge Dredd. This cover has his usual flaws of weird poses, and flabby bodies, but it has atmosphere. There is a real sense of the outside world intruding on the cozy domesticity of this couple, and that things will not go well for them. Specifically what we are seeing is the crime swoop we saw starting at the end of Judge Dredd last issue. It's like a stop and frisk, except they frisk your entire home, which is very on brand for Dredd, a future fascist cop. 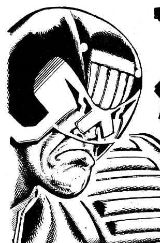 I was reading an article by Arthur Wyatt about 2000 AD, and I came across this little snippet of information: Dredd was designed by Carlos Ezquerra, a Spanish artist who had lived under Franco’s regime. Ezquerra’s fascist references for Dredd were clear — he had based Dredd’s helmet on an executioner’s hood and bedecked his uniforms and equipment with an eagle insignia swiped from a fascist-era coin. To drive the point home, he added reflections in Dredd’s visor reminiscent of SS lightning bolts. In total, Dredd dripped with imagery of violence and totalitarianism — not a comforting figure. 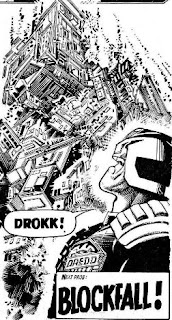 Along with his take on Dredd, the cictyscapes Smith draws are detailed and evocative. It's the kind of architecture being built now, and you have to winder how long it will be before our "policed by consent" peace officers become the fascist boot boys that Dredd and his fellow judges are. 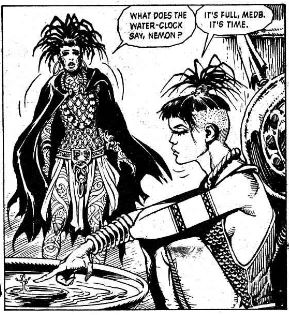 Next up is Slaine, as usual drawn by Belardinelli, and this episode is not so great. It features supermodels in chain mail swimwear. It's terrible, like a Carry On movie, but with stupid levels of violence. Belardinelli does draw a very nice looking wicker man though, so maybe there is hope for this story yet. We'll see where it goes next week. 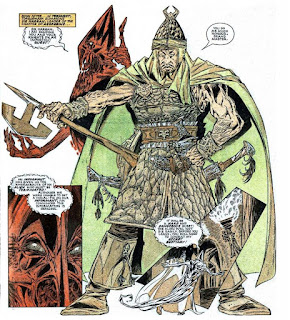 Next story up is Nemesis the Warlock, and usually I would talk about O'Neil's penmanship, but not this time. There's a repulsive, racist stereotype this episode, the sort of thing that is unfortunately all too common in these old comic books. We are presented with an evil knight with hooded eyes who leads an order of assassins. It's grim stuff. Hopefully this guy will soon be written out and I can return to gasping in awe at the artists drawing skills instead of lamenting this sort of misguided choice. 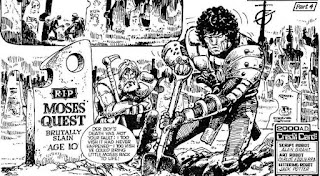 The penultimate story this issue is Strontium Dog, and our hero does a little grave robbing this week. This is a very interesting and dark story. It started out just like your average Strontium Dog strip, but it is going in a very unexpected, almost Hammer Horror, direction. The art by Ezquerra is just great, and captures the mood brilliantly. I'm all in for this, and I'm intrigued to see where it's going. 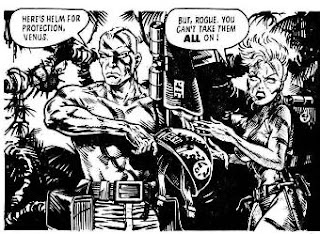 There is also a Rogue Trooper strip in the comic book, but it's my least favorite. It's like that Guy Ritchie film he made with Madonna in 2002, Swept Away (The film is a remake of Lina Wertmüller's 1974 Italian film of the same name). Ritchie's version stars then-wife Madonna and Adriano Giannini. When the studio screened the film for Wertmüller, director of the original film, it is alleged that Wertmüller left the theater at the end crying out, "What did they do to my movie? Why did they do this?" I feel the same about this story. "What did they do to Rogue Trooper? Why did they do this?" The usually grim future warrior who broods among the trenches of a future version of WWII is here hanging out on a remote island with a bikini-clad girlfriend. It's just weird and wrong. 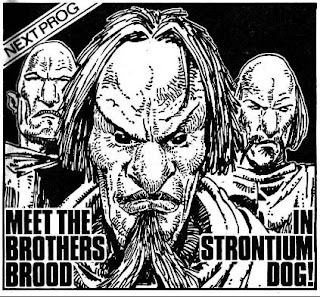 This has been a vintage issue, with great art, but not without its problems. Unfortunately, the image they have chosen to put in the back of the comic book to advertise the next issue hints that the next one will be just as difficult to read in places. As I've said before, 2000 AD is my problematic fave, and I'm in this for the long haul now, so I'm just going to have to keep reading.