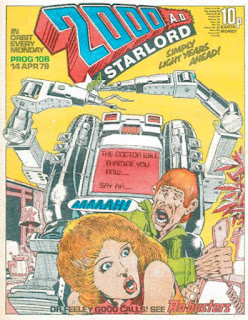 I’m reading another issue of an ancient British comic book for this post, a comic book called 2000 AD. I’ve been reading back issues of 2000 AD for months, and I have reached issue 108. This is another classic of the comic’s run, and is a great example of what I think of as the golden years of 2000 AD. I write a lot about 2000 AD, it was a very formative experience for me, and I still read it today. I have a 2000 AD page where I link to all the issues I have talked about on this site.

There is a lot of good stuff inside this issue, but let’s start with the cover. The cover of this issue is a real treat. It is a scene from one of the stories inside the comic – which I always prefer to some random sci-fi cover art commissioned for no particular reason – and that story is one of my all-time favorites, a strip called Ro-Busters. The illustration is also drawn by McMahon, one my favorite artists from among the 2000 AD stable, or anywhere. The image is of an insane robot doctor breaking in to what looks like a suburban kitchen to cause havoc.
This rampaging robot on the cover is called Doctor Feeley Good. The comic was published on the 14 of April 1979, and. I’m pretty sure that this is in reference to a song by Wolfman Jack that had been released a couple of years previously. Wolfman Jack was an American disc jockey famous for his gravelly voice. The Wolfman character was based in part on the manner and style of bluesman Howlin' Wolf.


The musical reference to an ancient song, the man reaching for a land line, and the decoration on the lamp and kettle combine to make this a delightful period piece. The art too dates it, comic books just don’t have such dynamic and sketchy art on the cover these days. Everything now is more painted, more considered, and lacking in the manic energy of this image. It’s a really lovely illustration and captures the violence and flux of the Ro-Busters strip at this point. 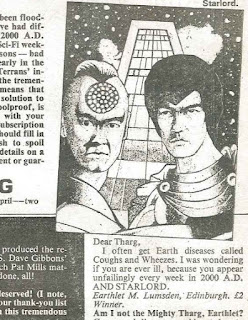 We have to wait till we get to Ro-Busters however, because it is one of the later stories in the comic. The first page inside is an editorial page, which I don’t usually mention as I am looking through an old issue but something about this one caught my eye. Readers used to send in art based on characters in the comic book, and the best ones get published here, along with reader letters. There is a character called Starlord, and one of the readers has drawn him, but he looks a lot like Bruce Lee.

Bruce Lee, the martial artist, philosopher, actor, director, screenwriter, and producer is still famous, of course - he is widely considered to be one of the most influential martial artists of all time, and a pop culture icon of the 20th century - but back in the late 1970s, he was huge. These little touches of nostalgia when reading an old comic book really make it an even more enjoyable experience for an old geezer like me. 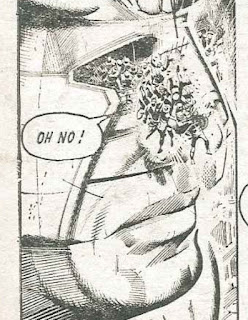 The first strip this issue is Judge Dredd and it has to bring its long-running Day the Law Died story to a conclusion. It does this by contriving to have the tyrant who usurped the city flung from a local landmark. It’s a hasty conclusion to the story, and an anti-climax to a tale about a lunatic, dictator brainwashing Americans to gain power. It has had a lot of spooky parallels to our current batshit, tyrant troubles with Trump, but now things will undoubtedly return to normal in the Judge Dredd strip. If only it was so easy in America.

The next story up is Robo-Hunter, which isn’t much of a story at all. The whole thing is just a weird premise about a robot planet dragged out week after week and used as the setting for weak jokes. There was no racism this week, and quite a lot of action, so this is actually one of the better episodes of this strip. 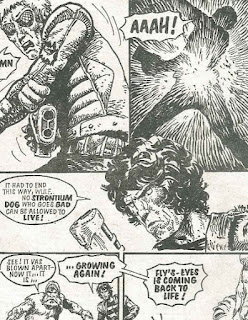 After flicking through Robo-Hunter we come to the much more interesting Strontium Dog. This issue in Strontium Dog, the hero Johnny Alpha finally catches up with the criminal he has been hunting for the past four weeks, and shoots him. Unfortunately, because he has chased the guy all the way to hell itself, the criminal comes back to life. 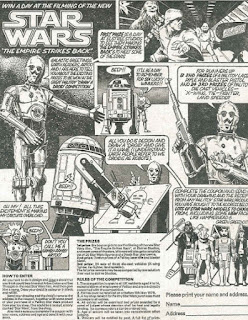 After Strontium Dog, there is a full page advert for The Empire Strikes Back, which was filming in the UK in 1979. The images in the add look to be drawn by Brian Bolland, judging by the lack of backgrounds and equipment made up of random geometric shapes. His art is always very disciplined and is the opposite of work done by Mike Mcmahin, such as the wonderful Doctor Feeley Good of the cover. It is a real treat that two such different and talented artists were working on this comic book at the same time. 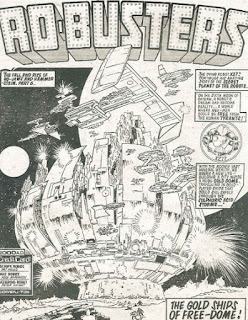 After all this, we finally get to the really good stuff, Ro-Busters. This issue we find out more about the secret, golden robot planet that our fugitive gang of droids must head for, if they ever want to be free. The contrast between the golden robot city drawn by McMahon on the first page, and the robots drawn by Bolland in the ad for The Empire Strikes Back couldn’t be more stark. McMahon has gone to town on action and detail here. He has even drawn a huge plume of lens flare coming off the gold on the right, and other flares of light dotted around. It is absolutely not a realistic representation of lens flare, but it looks great. 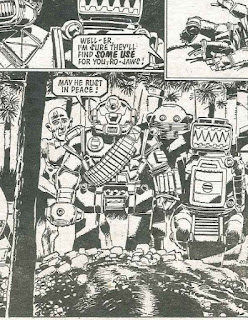 In this installment, we are seeing a robot rebellion from the point of view of the heroic droids involved, and they have already started to rack up a body count. It’s a great story with great moments, such as the panel showing the gang of rebel robots burying a robot friend of theirs. 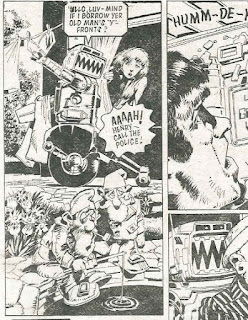 The scene where Ro-Jaws is caught taking male underwear from a washing line, along with some other clothes, so they can dress up the android among them as a human, is also great. This is an all time classic episode of Ro-Busters with wonderful art, great gags and characters, and some beautiful imagery of a planet where robots live free. It made a huge impression on me the first time I read it, all those years ago, and I am enjoying reading it again now. 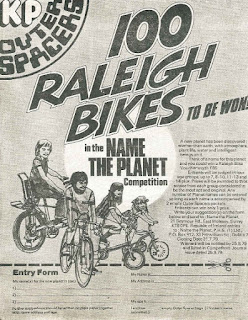 Ro-Busters is followed by a wonderful nostalgia hit. There is an ad that combines KP Outer Spacers with Raleigh Biks, including that 70s icon, The Chopper. It put a grin on my face just to see it. All in all, this is close to the pinnacle of what 2000 AD was, back then. I can’t wait for the next issue, I have scans of it on my hard drive already so it shouldn’t be long before I get a chance to read it.