Here comes yet another post about an antique issue of 2000 AD, ready for inclusion on my 2000 AD page where I link to all the issues I have talked about on this site. This particular issue was published 27th October, 1979 and has an alien designed by Belardinelli on the cover. The conventional wisdom is that Belardinelli was good at designing aliens, but I often found his creations to be a little ridiculous. 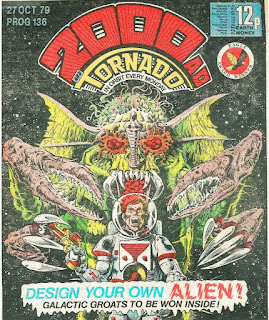 The alien on the cover here is one of those messed up creations. Fewer limbs and a bit more of an idea of the creature’s anatomy would have made a big difference. I could especially have done without the exposed brain, trunk for a nose, and fried eggs for eyes. On the other hand Belardinelli sure can draw detail of leathery flesh, tendons, and bone. It isn’t his drawing skills that are wanting but his restraint in putting together his creatures. Sometimes less is more. He was always better suited to drawing the dinosaurs of the FLESH strip than aliens, in my book. 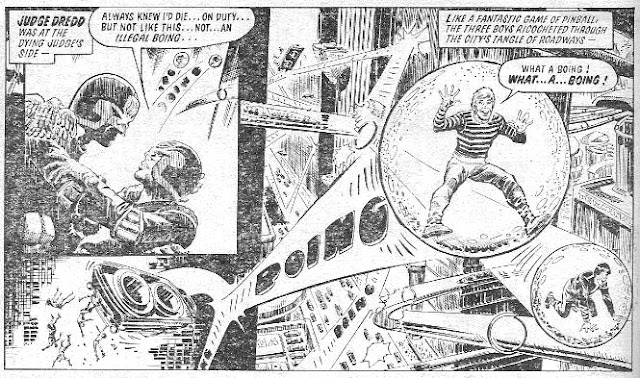 Judge Dredd by John Wagner, with art by Barry Mitchell, is the first story up. Barrie Mitchell is an artist who drew for romance titles like Bunty, Mandy and Diana, as well as action titles such as Pow, Wham, Sparky and 2000 AD. He is best known for the soccer comic 'Roy of the Rovers'. His art is only just competent enough for a Dredd strip and the story is also absolutely ridiculous. Dredd is a little bit of a hit and miss strip, it can be the absolute high point of an issue but there are also absolute clunkers like this episode. 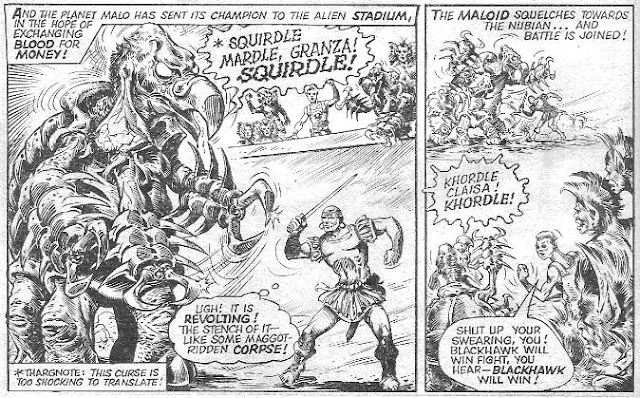 Blackhawk is next with art by Massimo Belardinelli. The story is okay but the art has Belardinelli giving free rein to his worst instincts in alien design. The aien here is a cartoonish vulture headed creature with a half shell, millipedes for arms and elephant legs. It is not in the slightest bit frightening or imposing as an arena enemy. 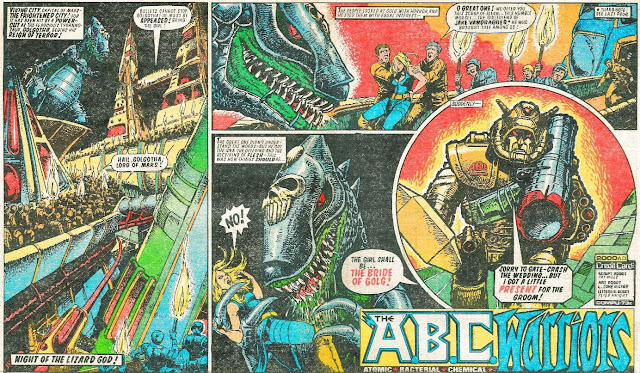 Then comes A.B.C. Warriors by Pat Mills, with art by Carlos Ezquerra, and it is the only joy in this issue. I love the idea of pitting robots against dinosaurs, even if the giant beasts wouldn’t really stand a chance. The fight between Hammerstein and the tyrannosaurus ends with it impaled on one of the pyramids of Mars, the second bad guy to meet their death the exact same way. But I have no complaints about that, it’s just as cool the second time they go to that particular well.

Then comes The Mind of Wolfie Smith, by Tom Tully. They are going for a creepy, Hammer House of Horror vibe, but instead we get something a little closer to Scooby-Doo. I have never really thought of 2000 AD as a kids comic book, but this story is probably as close as it comes to be something for really young readers. 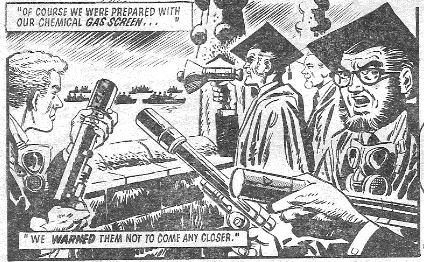 The Mind of Wolfie Smith is followed by Disaster 1990 by Gerry Finley-Day, with art by Carlos Pino. This is a surprisingly effective episode of a strip that can sometimes get a lot of mileage from its environmental disaster, post-apocalyptic setting. The fact that the Oxford professors in the story are wearing mortar boards and gowns as they fight for survival in a flooded UK where society has broken down is a little unlikely, but no more unlikely than the crazy stuff in The Walking Dead every episode. The art by Pino is also top notch. In fact, I am going to put it up with A.B.C. Warriors as one of the two strips that stand out from this very ordinary issue of 2000 AD.

There is also a poster of Captain Klep on the back of the comic book, but that is just a complete waste of space. I find it hard to believe that any reader, back in 1979 actually snipped this off and tacked it to their bedroom wall. To end, just a reminder that the best way to support this blog is to buy one of my books. Simply go over to Amazon, or Kobo and get one.
Labels: 2000 AD British Comic Book Prog Slog