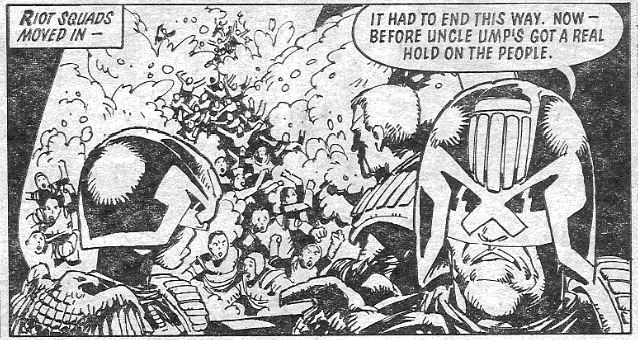 For your edification and entertainment here is yet another blog post about a comic book called 2000 AD. I write about 2000 AD (mostly ancient back issues) because reading it was a very formative experience for me. I have a 2000 AD page where I link to all the issues I have talked about on this site, which by now is a lot. 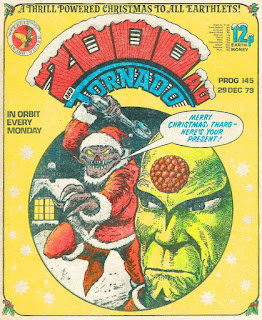 This post is about a very early issue of the comic book published on 29 Dec 1979, which makes it a Christmas issue, so there is some pretty snow on the logo. Other than that nice touch, the cover is not great. It is drawn by Ezquerra, one of the most talented comic book illustrators ever to walk the surface of this unworthy Earth, but yeah, it’s not good. The problem is probably that the cover features the comic book’s alien editor, Tharg, being menaced by some random monster. I’m not a fan of Tharg, and I imagine having to draw him didn’t get Equerra’s creative juices flowing in the same way that drawing Strontium Dog, a space Western, did.

Judge Dredd is, once again, the first story in the comic book and we have McMahon as artist for the second week in a row, which is an absolute treat. If there is one comic book artist blessed with more raw talent than Ezquerra, it is Mike McMahon. The technology he draws in Judge Dredd is very futuristic, this week including riot foam, which is fired at a crown in the same way as water cannon but solidifies round the rioters to immobilize them. Judge Dredd is set in a totalitarian future where nobody bats an eye at such brutality.

There is a tiny but lovely panel where we see an establishing shot of a spaceport. It is a dark, atmospheric place, and McMahon creates it with just a few shapes and lines. It is stuff like this that makes me very jealous of McMahon’s talent. His work here is dark and gritty but so well drawn it just dazzles. 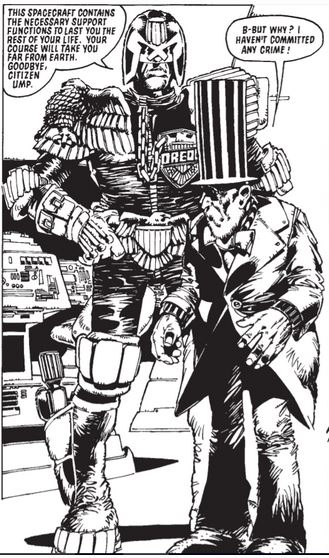 One frame in particular, where Dredd towers over a frail old man dressed as Uncle Sam really catches the eye. Despite the beauty of the art, the justice meted out at the end of the story is typically harsh and arbitrary.

The V.C.s are written by Ian Rogan this week, a pseudonym used by Steve McManus. He worked on Starlord, then moved to the less popular 2000 AD when it was canceled because of the high price of producing its glossy format. He was editor of 2000 AD from 1979 to 1986 (widely regarded as the title's golden age). After that he launched Crisis, a political and woke comic. He also co-edited the Batman/Judge Dredd crossover Judgement on Gotham.

The V.C.s spaceship is hit by some kind of space storm, and the characters do weird stuff. One has flash backs and tries to kill the rest of the crew, while the ship’s computer has a personality change that has no effect on the plot. It’s all enjoyable enough and I wouldn’t mind McManus taking over permanently, and taking this story in a less bigoted direction. One disadvantage of reading comic books published in the 1970s is the high likelihood of being presented with attitudes that would never, you would hope, make it into modern comic book stories. The art by Gary Leach is the weakest in the issue, but it is unfair to compare any artist to masters such as Ezquerra and McMahon.

The Mind of Wolfie Smith is the next story, and it isn’t particularly strong. Wolfie has mind powers, but there is nothing particularly sci-fi about the story apart from that. It isn’t a great fit for 2000 AD, and it didn’t last long. Wolfie Smith transferred to 2000 AD when Tornado got canceled, and with this very ordinary character as one of that comic book’s stars you can see why Tornado didn’t survive. 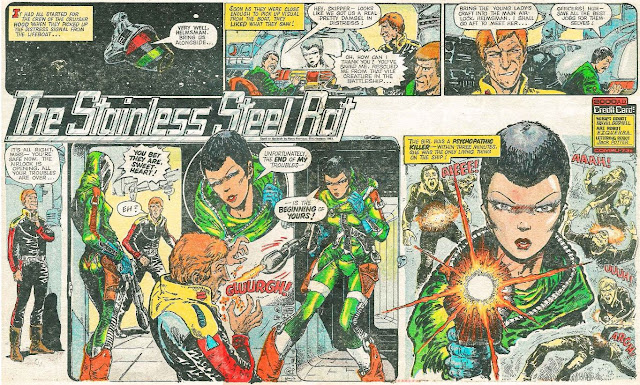 Next comes the Stainless Steel Rat, drawn by Ezquerra with much more enthusiasm than the cover, and it features a psychopathic female killer that reminds me of Servalan from Blake’s 7. With Ezquerra’s penchant for recognizably basing his character designs on real people, I think it’s entirely likely that the similarity is not accidental. The hero of the strip, James Bolivar diGriz (AKA Slippery Jim, AKA The Stainless Steel Rat) is very obviously based on James Coburn, for example.

There are new spaceship designs in this episode, including a tall, wedge shaped spaceship that is intriguing, but I don’t know if I like it. It depends what angle you look at it from. But at the end of the strip, powering away toward new adventures, it looks great.

After that there is a one page Captain Klep story. It’s ugly and unfunny, and the sooner it is canceled the better. This is another of the substandard characters that came over to 2000 AD from Tornado. After Klep comes Black Hawk, and this is a character I’m really torn about. He’s one of the triumvirate of dross brought over from Tornado, but he is a black man starring in his own story. In a  comic book from 1979 that is something to be lauded. It is such a shame his stories were always so monotonous, and that the artist was such a bad fit. A story about a space gladiator needs a grim and gritty artist, not the fanciful and humorous work of Belardinelli, no matter how skillful and beautiful to look at it is. 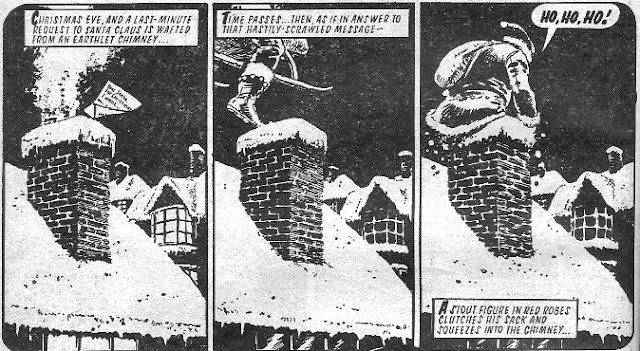 Ezquerra is again in action in the final strip, a one shot with an uncredited writer created specially for Xmas.  It’s a dumb story but the art us beautiful. Ezquerra sure does draw an atmospheric street of suburban semidetached houses in winter.