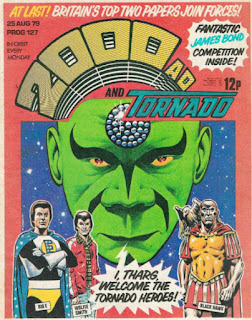 I remember the feeling of betrayal I felt when Starlord was officially no more, suddenly replaced in 2000 AD's affections by the far inferior comic, Tornado. It felt bad, very bad. I didn't even really think of myself as a 2000 AD reader, because I had only started reading 2000 AD when it merged with Starlord. I still, in my heart, thought of myself as a Starlord reader. I have written a bunch of posts about reading Starlord, starting with issue 1.

I had graduated to Starlord (my first sci-fi comic) from reading Whizzer_and_Chips (a more traditional humor comic) so the idea of a comic book with two titles on the masthead wasn't so strange to me. Whizzer and Chips shared top billing for - checks Wikipedia - a bajillion years, and I thought the same would be the case with 2000 AD and Starlord. To have Starlord replaced after just a year? was an incomprehensible slight, and this was when I started considering dropping 2000 AD and defecting to Marvel, or going back to Whizzer and Chips, that's how upset I was.

I remember reading this comic book for the first time, way back in August 1979, and I remember very well how I felt about my purchase. I can almost see the expression on my young face, and I was not a happy camper. The reason I was so unhappy was that this is the issue where Starlord disappeared from the masthead of 2000 AD, for good. 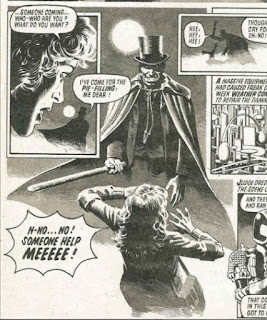 To add insult to injury, this issue's cover star is Tharg, the rubber-faced alien editor of 2000 AD with his unfunny delusions of grandeur. I always groaned at his shenanigans, and it particularly irked me when he was given a cover that could have been used to showcase an actual sci-fi story. I actively hated Tharg, especially when compared to the editor of Starlord, who had been Starlord himself, a muscular space hero with a cape and blaster pistol, not a pencil neck cosplay nerd like Tharg. The other people on the cover are the lame heroes being added to the 2000 AD roster from Tornado, and none of them have stood the test of time.

Let's open this travesty of a comic book up. The first story is Judge Dredd, drawn by Bolland, and it is Bolland at his worst, pedestrian and creepy. The backdrop to this strip is supposed to be images of a future city but the panels Bolland draws look like snapshots of contemporary brick buildings in 1970s Britain. Judge Dredd should be sci-fi, full of futurology and ideas, but this episode certainly isn't: it is titillating horror. It starts with a couple of teenage girls in peril, and soon one of them is killed by a grinning psychopath using a very phallic baseball bat. It is all very distasteful and Killing Joke-like. Sometimes I'm okay with Bolland, and sometimes - like with this story - I actively detest him and his skilled, pedantic, distasteful art. 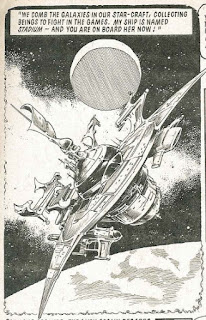 Next comes Black Hawk,  a story drawn by Belardinelli about a Nubian warrior in ancient Rome who is kidnapped and forced to be a gladiator. It's not a great story, but it is kind of cool that it gives 2000 AD a touch of diversity. The only sci-fi thing about it, however, is that the gladiator is now... IN SPACE, and I don't think that's good enough.

The next story is ABC Warriors, normally one of my favorites, but this one is not a great one. The art is by Brendan McCarthy and again the sci-fi is in the background as this is a kind of horror story. It revolves around a robot that gets melted, becoming a kind of blob-like monster. Next comes The Mind of Wolfie Smith, which is about a psionic boy in the present day. The mind powers make it technically a sci-fi story, but I think nowadays we would call it YA. So this isn't really my thing, either. After this we have Disaster 1990! which is also a story set in the present day, with the only sci-fi element the fact that there has been a large flood.

Lastly we get an unfunny one-page story called Captain Klep, which is a parody if Superman. The whole thing is a far cry from a comic book set up to cash in on the popularity of Star Wars just a few short years before. It is like the cool sci-fi stuff that makes 2000 AD so enjoyable is leeching away. There are too few spaceships or robots and too many images of present day London. I remember feeling betrayed by this comic book, for ditching Starlord, but also just generally very disappointed in its contents.

I didn't give up reading 2000 AD immediately, but the seed had been planted and it would be only a matter of time before I started to skip a few issues here and there, and then stop buying 2000 AD entirely. (Don’t worry, I started reading it again a little later). It really is true that a comic book is only as good as its last issue.

I'm very interested to see what comes next. How long will it be before these Tornado characters get dropped and 2000 AD course corrects to include more sci-fi again. I hope this is a low point and the next issue will already be a little better.
Labels: 2000 AD British Comic Book Starlord