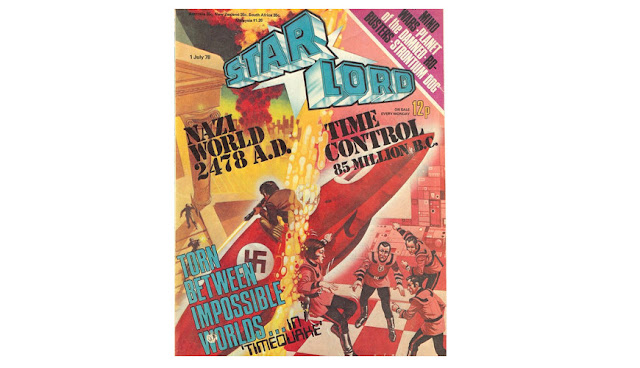 Let’s take a look at an issue of Starlord. I’ve been rereading this comic book, thanks to a wonderful website that collects the old comic for the public’s perusal. Back in 1978, I used to have to wait a week between comics, but now I can just go to the site and read another one whenever I like. They only ever published 22 of them, unfortunately, so I should really ration them. That’s not what’s happening though, I’m reading one whenever I get the chance, and right now I’ve reached issue eight.

The cover of issue eight of Starlord is another that actually represents something happening within the pages. Unfortunately, the scene is from one of the weaker strips, a collection of action and malarkey called TimeQuake. The story has been languishing in the Alternate history subgenre, which is not my favorite, to say the least.

I’m probably not a fan of alternate history because Harry Turtledove is one of the most prolific practitioner of this genre. His books include subjects like the Confederate States of America winning the American Civil War, and a Nazi-esque Confederate government attempting to exterminate its Black population. It seems to me that fiction like this likely comes from a dark place, and even if not certainly appeals to people who have given themselves over racism. I found a quote from Vox that I thought was illuminating:

An ultra-polite high school classmate carried around Harry Turtledove’s alternate history book of the Civil War in which the South wins. He venerated Robert E. Lee as a gentleman and a patriot and proclaimed Lincoln “not my president.”

Anyway, I’m not saying TimeQuake is anything like as despicable as this. It treats Nazi’s unequivocally as bad guys, but this is just not a genre I can relate to. That said, the cover itself is very attractive and effective, just a few too many swastikas. 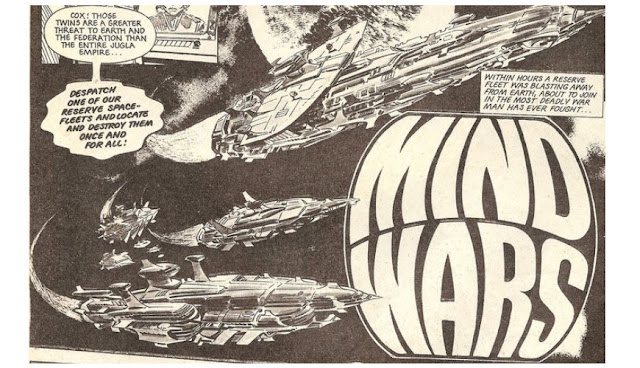 Opening the comic book up, actually clicking the “Next” button, brings us to the first story, which is Mind Wars. It is a fun strip that owes a great debt to Star Wars, which had just come out and taken the sci-fi world by storm. 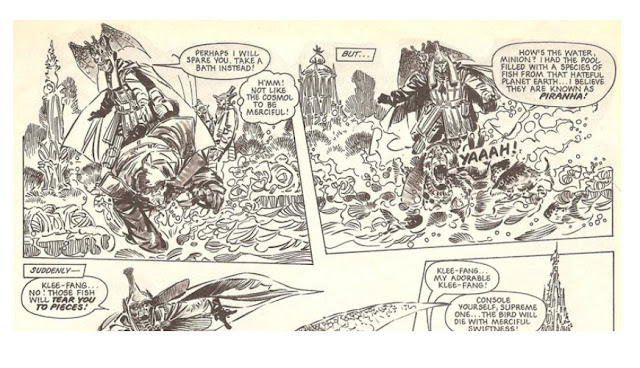 Last week the bag guy had somebody who displeased him ripped apart by Klee-Fang. Klee-Fang is the bad guy’s tame half-pterodactyl-half-bat creature. This week the unfortunate fool that disappoints him is hurled into a pool of piranhas. It is a lovely instance of the shark pool trope, except with piranhas. Then Klee-Fang flies into the pool and eats some of the deadly killer fish, which have just eaten the minion. It is this sort of badassery that my nine-year-old self used to love in this comic. 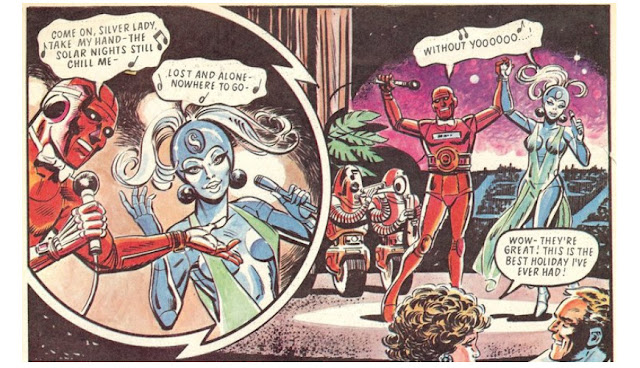 Next we come to Ro-Busters, which was my favorite strip in the comic back then. This issue continues the story of a Westworld-style robot uprising at a luxury space hotel. The heroes of the strip are a band of second-hand, expendable robots that are sent into disasters considered too dangerous to send humans into, which certainly includes a bloody robot uprising. The two heroes, from among this group of tough robots are Ro-Jaws and Hammerstein, an ex-garbage robot and an army-surplus war droid.


The leader of the uprising is a red robot called Max, and he has a female co-star called Silver Lady. The gets her name from the song by David Soul. "Silver Lady" was a number one hit in the UK Singles Chart for David Soul, spending three weeks at the top in October 1977. David Soul was huge at the time the comic originally cam out, because he played one half of Starsky and Hutch.

At the end of this week’s installment, Ro-Jaws discovers human clothes hidden in the red robot’s dressing room, and realizes he is a human pretending to be a robot. I remember being disappointed by this plot twist at the time. Even back then, I liked my deranged killer robots to be robots, not humans in disguise. 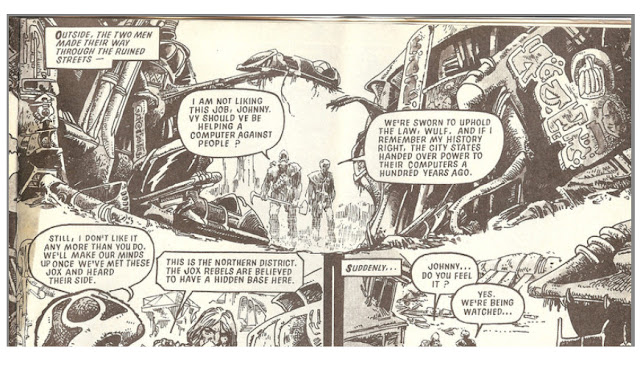 The next strip is Strontium Dog, starting a new story. Our heroic bounty hunter, and his sidekick Wulf, have been hired to go hunting in a depopulated and post-apocalyptic city by an AI. It’s a very atmospheric story, where Johnny is hunting skeletal humanoids through deserted futuristic ruins, all beautifully drawn by Carlos Ezquerra, a certified comic book art genius. 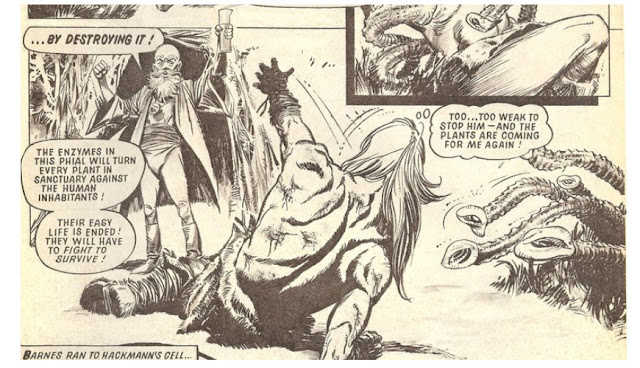 Next we have an installment of the strip with the decidedly B-movie-like title of Planet of the Damned. We have had a few sub-par episodes of this story, but this week sees a return to form, with our hero, a barbarian called Flint, suddenly becoming a bad guy and doing the bidding of a group of robed cultists, for no readily discernible reason. Some might call it inconsistency in the character’s motivations, I prefer to think it hints at a complex back story that we as readers just aren’t privy to. Anyway, whatever the truth, it sets up a lovely situation involving a mad scientists, a doomsday weapon, our barbarian hero Flint, and a flesh eating plant. Now that is top-notch action-centered storytelling. 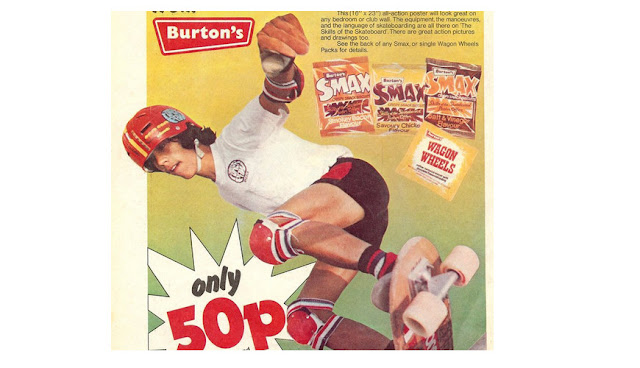 Next we get a full-page color advert for Wagon Wheels and smoky bacon flavor snacks, featuring a kid on a skateboard. There have been many debates amongst fans of Wagon Wheels biscuits about their size. Many believe Wagon Wheels have shrunk in size over time, but the manufacturer has denied this. It has been suggested that the supposed shrinkage is due to an adult's childhood memory of eating a Wagon Wheel held in a much smaller hand. I still love Wagon Wheels today, and they do feel smaller than they did back in 1978. This advertisement page couldn’t be more seventies, and I love it almost as much as the rest of the comic.

Last, and certainly least, we have TimeQuake, the story I was complaining about at the top of the post. It isn’t bad and one of the heroes is a woman of Chinese heritage called Suzie Cho, who is a very sympathetic and competent character. Unfortunately, there are a lot of Nazi’s and there is no plot whatsoever. For three weeks this has been nothing but a break-neck chase sequence through time. About a hundred panels of just running, punching, flying and shooting.

And that’s it, the comic is over and I have to wait till next week to read the next installments of all the cool stories. Hay, no... wait, I don’t. I can read the next one right now if I want to. I shouldn’t, I should be rationing these 22 sweet classic comics. If only my willpower were strong enough.
Labels: Prog Slog Starlord