Reading 2000 AD as a child was a very formative experience for me, and I still read it today. I have a 2000 AD page where I link to all the issues I have talked about on this site. So let’s take a look at an ancient issue of this comic book, one from forty years ago. The comic book is called 2000 AD, and this is a very interesting issue. 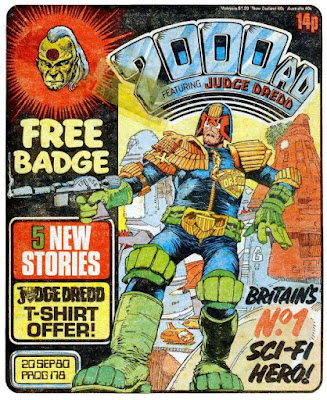 The cover, for example, considering it had to accommodate a free gift, is not bad at all. It features the star of the comic book, Judge Dredd, drawn by one of the star artists, McMahon. I love McMahon’s work, and it’s always great to see Dredd on the cover, but this isn’t the best McMahon Dredd. He’s in a strange pose, as if he is dancing or drunk. 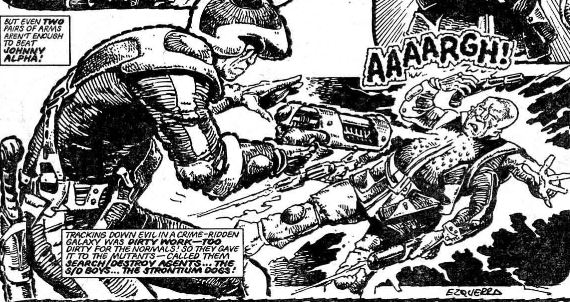 The first story this issue is Strontium Dog, one of the classic strips that came to 2000 AD when Starlord passed away a few years previously. Strontium Dog is a sci-fi western with art by Ezquerra that compliments the concept perfectly. It is also a story seen from the point of view of the people at the bottom of this future society. The characters in Strontium Dog are the outsiders, the others, the underdogs, and the mutants. In an interesting twist, the four-armed thug Johnny Alpha is hunting this episode isn’t a mutant. He explains that he has had the arms of his friend grafted on. This is the sort of grim but believable sci-fi detail that makes this such a deep and convincing world.


A new story is the next strip in this issue, a story called Mean Arena that is a transparent attempt to transpose a sport strip into a sci-fi setting. The question is will the audience for sports strips and sci-fi strips intersect in any meaningful way? I’m much more on the sci-fi side of that particular Venn diagram, but I remember loving Man Arena when I first read it, almost half a century ago. The art is not quite there yet, but it does soon improve.

In the first episode we meet a young player, who you might assume is going to be the hero of the strip, but he dies of some weird medical problem and we are introduced in the last couple of panels to a grizzled veteran, the man's brother, who turns out to be our protagonist instead. It is a very simple and direct way to give the character motivation, but it does work. 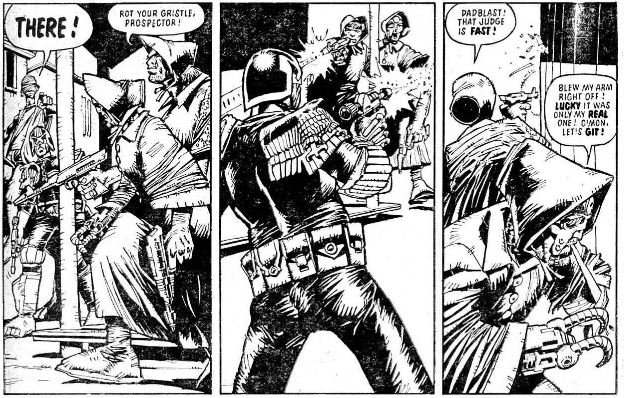 Judge Dredd comes next, and he isn’t in his usual stomping ground, Mega-City One. He is on an epic quest where he has to chase a kind-of chosen one called The Judge Child. This issue the chase has brought Dredd to a tiny town on a remote planet, a little like a Wild West one-horse town. It is the sort of story that Strontium Dog does very well, but which isn’t such a good fit with Dredd. 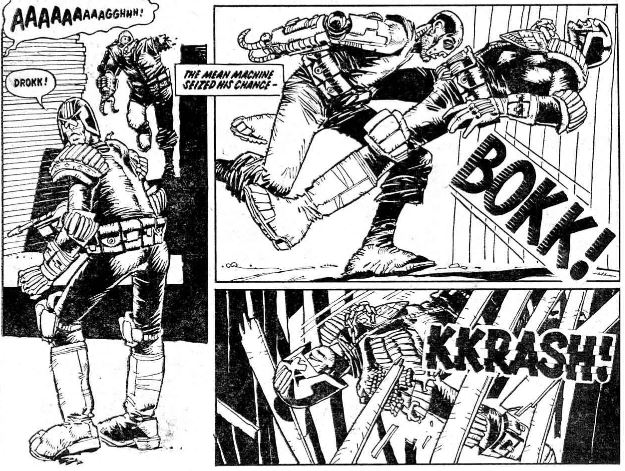 The kid is being held by a family of outlaws, and McMahon draws some dynamic and bone-crunching action as Dredd goes after them. His superior training allows him to deal with the gang without too much trouble. Then two of the gang members disguise themselves as bonnet-wearing Wild West women to get close to Dredd, which is a strange story beat, but Dredd sees right through it and opens fire on them. Dredd's first shot blows the arm clean off one of these two attackers, and it is amazing to think that this comic book was aimed at pre-teen boys, back in the 1970s and 1980s. The attackers turn out to be the classic Dredd enemies, The Angel Gang. Mean Machine Angel drawn by McMahon is a particular treat.

Another new story starts next, called Meltdown Man. For some reason, a tough guy is projected into another dimension by a nuclear explosion. The world he finds is populated by anthropomorphic animals with human overlords. The whole thing is nuts, and the protagonist seems to be feeling the same way.

In this issue there is another strange strip, called Killer Watt. It has great art by Kevin O’Neil and we see some characters and themes in embryonic form in it that will become central to stories in later issues. One of the weirdest panels is a robot bird shaped like concord attacking a train. It is a machine version of animal evolution, perhaps the start of a thought process that would later result in Metalzoic. The story is also set in the universe of Nemesis. 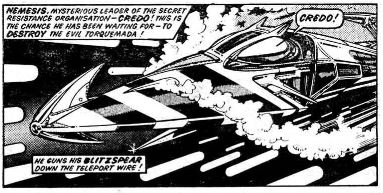 This early strip has all the elements of what would become the classic Nemesis story. It is about Xenophobia, with bad guys that wear a clan-style hood, and it is about a Gothic, low-tech version of sci-fi. In the strip we see Torquemada using a teleportation terminal where he is beamed along wires to his destination. It’s a beautiful image, and ideas like a teleportation machine that is a little like a telegraph terminal are just beautiful. 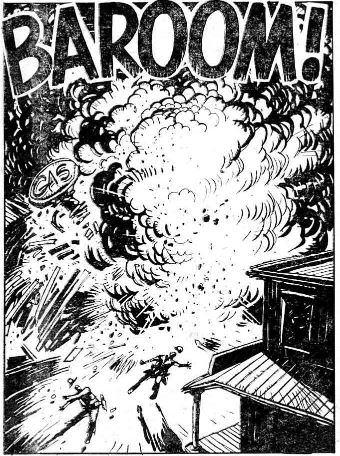