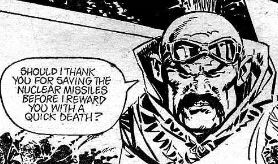 This comic book was published long ago in the 1970s. It was a time when Rock was dying and New Wave was gaining traction. It was a time before mobile phones and social media, when music fans didn’t stream the hits, they bought them on vinyl. It was a much more primal, less technological place, and this comic book reflects that. It is printed in smudgy ink on the least expensive pulpy paper. It’s very fitting for this rough and ready comic book, and comes across well even in the scans I’m reading it from. 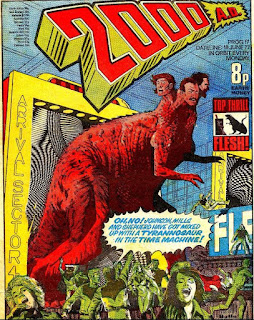 I write a lot about 2000 AD because reading it was a very formative experience for me, and I still read it today. I have a 2000 AD page where I link to all the issues I have talked about on this site. But let's get back to issue 17. This issue of 2000 AD has a very famous and recognizable cover, which often comes up in a Google search for 2000 AD, at least the ones I do. It shows a The Fly-type scenario where a time traveler gets their DNA mixed up with some creature. Here, however, instead of Jeff Goldblum getting mixed up with a fly, three time travelers have gotten mixed up with a T-rex. It's a completely bonkers thing of beauty, if a little ridiculous. Along with its eye-popping central image, the cover also combines drawing, photographs, Letraset, stencils, and bold colors to create an image that is a great example of Pop Art. In short, it's rubbish, but striking. 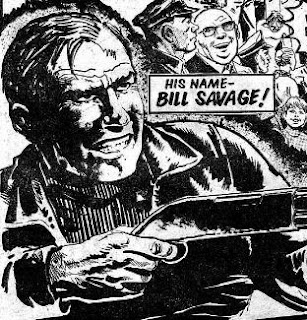 The first story, as usual, is Invasion, and in this issue the hero, Bill Savage is looking even more weasel-like and bestial than last week. He becomes less human, more of a primal, animal force with every passing episode. This week, in a very ill advised plot, the invading Volgans are holding a slave auction on Petticoat Lane. It's jaw droppingly brutal stuff, with summary executions and a napalm grenade gleefully used on one invader. It’s the sort of action you would never see in a comic book, today, and it is even more crazy when you think that this comic was squarely aimed at eight to twelve year olds. 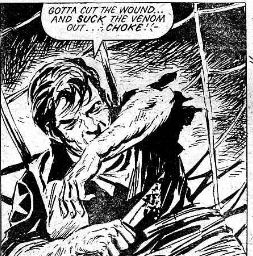 The second story in this issue is Flesh – the source of that ludicrous image from the cover – and as you may have half suspected from a pulpy story like Flesh, last week’s cliffhanger was just a fakeout. It’s nice to see that the writers of those days were so unafraid to use such tropes. This is comic-book storytelling at its finest. We were told last week that the strip’s hero, a cowboy called Reagan, was dead, poisoned by a giant spider, but this week he's sucking out the poison, and soon knifing the giant spider in the brain. Great stuff.

Harlem Heroes is third up again this week, but compared to Invasion and Flesh, it just isn't bloodthirsty enough to hold my attention. It is skillfully but statically drawn, and just lacks the glee at destruction of the two previous strips. 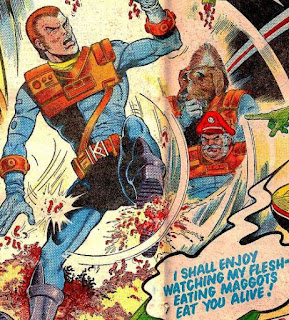 The bizarre joy at bloodthirsty and barbarous acts comes back with Dan Dare, which is the fourth story. In a scene reminiscent of a modern reality show, Dare is having maggots poured onto him, but these ones are flesh eaters. You would hope that not even the most desperate for ratings show would do that. 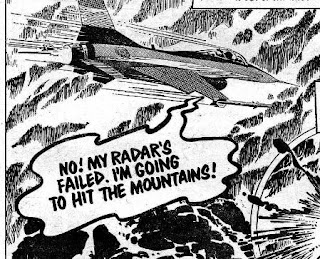 M.A.C.H.1 is next, and it is as gleeful about military hardware as the previous strips have been about mayhem. This issue, we get a particularly nice drawing of an F-16. Production of the F-16 was only approved in 1976, according to Wikipedia, so these were futuristic and cutting-edge aircraft at the time of this comic book’s publication. Once again, the mission is successful, but M.A.C.H.1 is the only survivor, because of course he is. 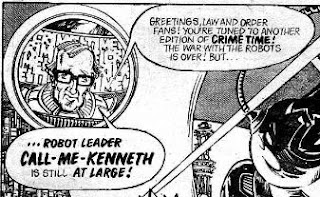 Next up is Judge Dredd, and it has a nice prediction of a reality show, called Crime Time, based around crime, like COPS. This comic book was published long before reality shows became real, remember, way back in the 1970s. It is a glimmering, among the blood lust, of the sophistication that will come to be a much more important element in 2000 AD. Just a glimmer, because the story itself is an all-action fight with a robot and nothing much more than that. The art though is also very, very good. It is a beautiful foretaste of the kind of complex and futuristic images 2000 AD will start serving up in the future. I can't wait.