In a recent post I talked about prog slogs, and how much I love them. A prog slog is where you read a swath of comic books, and I’ve decided to do a prog slog of my own. In a recent post I read issue one of a short-lived comic book called Starlord, so now let’s move onto issue two.
Scans of the pages of the second issue of Star Lord are here, so you can read along with the comic. Issue two, just like issue one, has another cover that is less than awe inspiring, but don’t worry, there are very good things within. 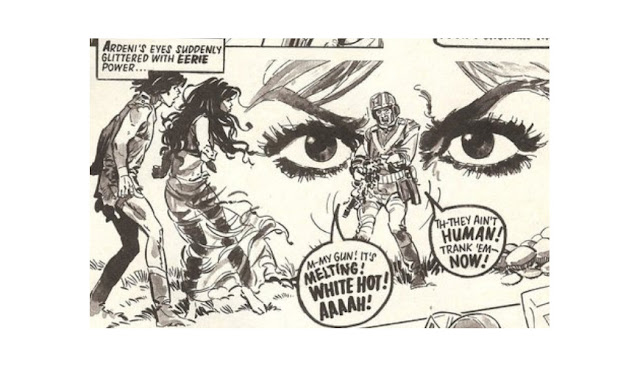 The first strip this week is Mind Wars, drawn by Jesus Redondo, and this thing is just beautiful. Redondo’s art is used to tell the story of twins Ardeni and Arlem Lakam, who develop psychic powers and become pawns in a deadly chess game between the Stellar Federation and the evil Jugla. It is the closest thing to Star Wars in the comic - so close that something like this today would probably involve legal action - and it is actually a lot better than the Star Wars comic being put out by Marvel at the time.

Also, in this modern age of decompression in comic books, it is a pleasant change to actually have the plot developing apace in one episode of a comic. Decompression is a style of storytelling where a strong emphasis on visuals and characters means the comic has slower-moving plots. This has reached ridiculous extremes in modern superhero comics, where a single fist fight may last for two months. According to Wikipedia:

Decompressed stories have been the cause of considerable controversy and debate among comics fandom. Many detractors accuse their writers of unnecessarily stretching out the page length of plots, thinning out the content per page in order to earn more sales and money for a limited amount of work. Defenders of the style claim that decompressed stories are not stretched out, but rich in character development and mood rather than plot progression. Some see the phenomenon as driven by the increasing popularity of trade paperbacks, which typically collect an average of six comic book issues in a volume and thus provide a target length for stories to fit.

Things are very different in this first installment of Mind Wars. The first page of the strip describes the cosmic stalemate that has developed between two galactic military powers, and the following four or five pages show how the twins are given powers, along with their first attempts to use them. There is an awful lot happening, and the story to come already feels like it is going to be big, and it is already very beautiful.

Next we have a second forgettable installment of TimeQuake. I remember not liking it much at the time, and my feelings haven’t changed at all in the intervening years. According to 26pigs both Mind Wars and TimeQuake were hastily concocted to fill out the new comic book and make it possible to publish it weekly rather than monthly. It’s interesting that this hasty process produced both one of the best and one of the worst strips of the comic. 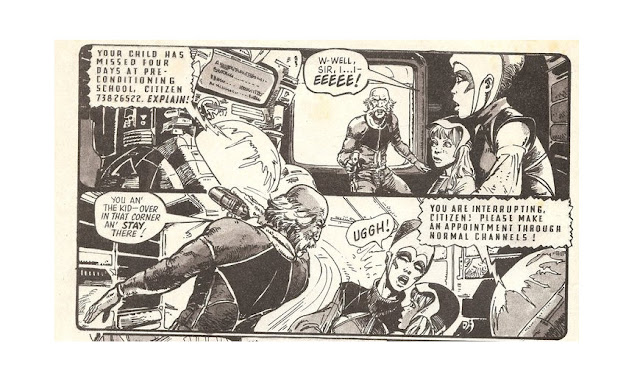 Next up we have Strontium Dog, with Ezquerra’s gorgeous art, and an interesting story where the hero, a mutant bounty hunter named Johnny Alpha, uses a time bomb to take out a criminal he has been sent to hunt down. This is a cool device, that Johnny then uses repeatedly throughout his stories, with the same shocking results every time. 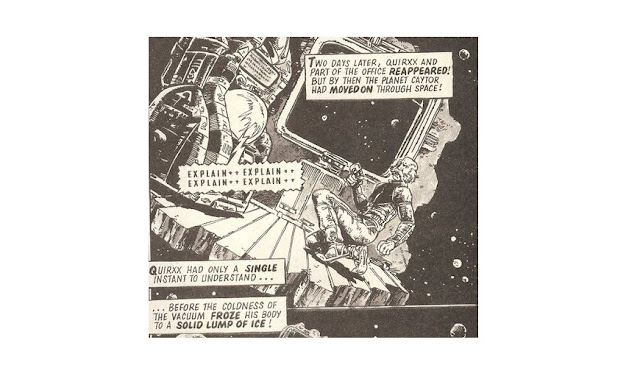 I remember being impressed with the mechanics of the time bomb. It jumps the target two days forward in time and by then the planet has moved away, leaving the victim in the vacuum of space. This is just the type of bloodthirsty action that was popular in British comic books of the 1970s.

The strip also features a robot teacher, which makes me smile because I have ended up as a teacher in my day job, and I can't wait to be made redundant by robots. As a side gig, I also write sci-fi novels and self-publish them. 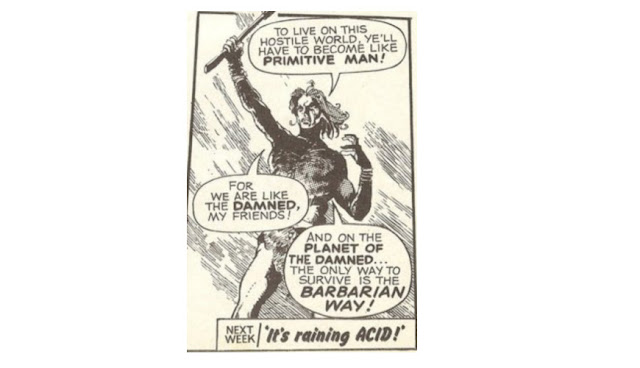 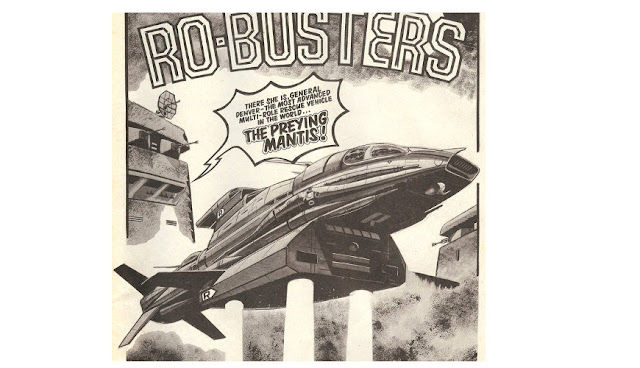 Lastly we have Ro-Busters, and this is a classic episode, in my opinion. It is one of the few early episodes where there isn’t a disaster that needs to be cleared up by the expendable robot heroes of the strip. Instead we get a close up look at the Ro-Busters’ base, which is on Devil’s Island, because this is the 1970s and people were obsessed with Devil's Island. We also see their spaceship, the preying Mantis, and get some backstory for the two main characters.

In short, we get to know our heroes, and we will therefore care in the future when they are ruthlessly hurled into danger by their human owners. I loved it then, and I love it now. I especially like the closeup of the preying mantis, which looks like it was designed by the enormously talented and famous comic book artist Kevin O’Neill to me, even though it is being drawn here by Pino.

The story ends with the latest disaster finally breaking out. A red mist of military chemicals rolls over the Florida Everglades, driving the local alligators into a kill frenzy as they migrate towards the nearest crowd of humans. The mist also warps human minds, so the robots of the Ro-Busters disaster squad will have to be sent in to sort things out. I can hardly wait.
Labels: 2000 AD British Comic Book Prog Slog Starlord